Heat practice report: Players eager to settle the score in Game 5 against Knicks

Share All sharing options for: Heat practice report: Players eager to settle the score in Game 5 against Knicks 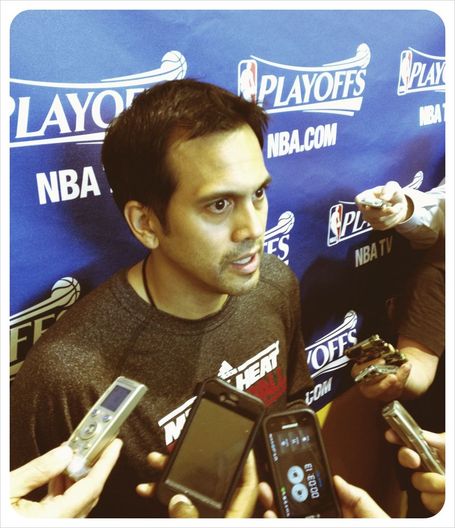 After leaving New York immediately after Sunday's disappointing loss to the Knicks, the Heat cancelled their planned media availability on Monday. If there was any lingering tension from the loss that featured a botched final play that robbed the Heat of several days of rest in anticipation of the second round, there wasn't any of it on display Tuesday where practice extended almost an hour later than planned.

By the time the media were allowed into the practice court, the players were winding down by practicing free throws and jump shots. Erik Spoelstra, as usual, was the first to talk with the media. Plenty of questions remained from Sunday's loss but the young coach preferred to focus on the present while acknowledging the lessons that had to be learned from a winnable game that slipped away.

"Everybody practiced today and it was back to work to focus on one thing and that's to come out for a full 48-minute game tomorrow night, on our home court," he said. "We did review all the film, we had to own it. We're concentrating on us and making sure we have our best performance of the series tomorrow night.

"We understand the decibel level of the noise will increase outside anytime we lose but we have to stay true to our reality. Really, what we thought we could do better and the things that we liked, we'll try to do more consistently."

Inevitably, the final play was brought up and Spoelstra was forced to defend his decision to place the ball in Dwyane Wade's hands while LeBron James looked on.

"At the end of the day we had an open lane on that drive and we've seen Wade make those plays time and time again over the years," said Spoelstra. "We'll live with that in the paint. He lost the dribble but it was a pretty good opportunity to attack the rim."

With that, Spoelstra was eager to focus on the closeout game at hand on their home floor. The Heat's only other opportunity in their history in that same situation was last year when they closed out the series against the Philadelphia Sixers 97-91 to take the series 4-1 after losing Game 4 three days prior on the road. The Heat are hopeful for the same outcome but the Knicks won't go down easily.

"For us coming back here at home, we want to dictate the game playing to our identity," he explained. "We're not going to start making things up and doing things we're not comfortable with. Yes, we've had to make adjustments each game like they've had but these are adjustments that fit into our system. Guys feel comfortable and confident right now. It's time to play our game and do it with an incredible amount of passion at home."

Next up to face the large media crowd was LeBron, as Wade chose to wrap up the practice session nearby by laying down on his back while chucking up three-pointers as assistant coach David Fizdale retrieved the errant balls. LeBron 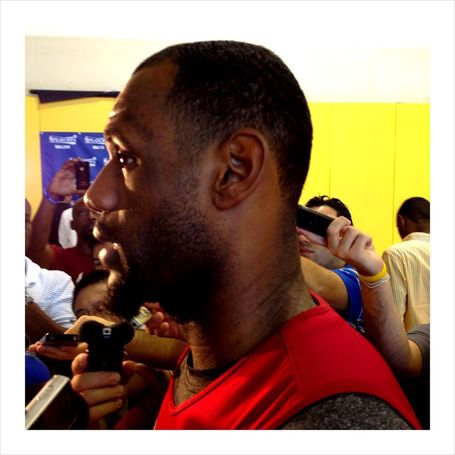 was immediately asked about the loss.

"You carry it with you 24 hours, you go over what needs to be done to correct it and then you get rid of it," he responded. "It's not saying that you don't care about it but you've got to move on to the next game. You can't let it linger too much and carry that game into game 5. So, game 4 for us is over and we're prepared for Game 5 now."

I asked LeBron if perhaps losing a game while up 3-0 in a first round series might ultimately be a good thing for the Heat, seeing as how it might force them to address any tactical errors that might have been made in the second half or in the closing moments.

"It don't matter," he answered back. "We've been through everything so it doesn't matter. We don't need a teaching tool in a loss. We've seen it all in two years."

He clearly thought I was asking him if the loss could be served as a motivational tool and though I would have liked to follow it up by clearing that up, the huge media crowd that was also littered with New York media had moved on to another topic and the opportunity was lost. There's no question that the Heat are clearly motivated to win a title and a largely forgettable game 4 wasn't going to change matters. Perhaps their play in Game 5 and onward will answer my question anyway.

Chris Bosh soon showed up to take questions from the press. He's had an up-and-down series so far, scoring in single-digits in two of the four games so far (though Game 3 was played immediately after the birth of his son Jackson on little rest) and disappearing for stretches of games. He has picked up his rebounding numbers with 19 combined rebounds the last two games after only grabbing 10 in the first two but wasn't particularly aggressive defensively against a hobbled Amare Stoudemire in Game 4.

Bosh was asked how the Heat would come out on their home floor and preserve the victory to finish off the Knicks once and for all.

"We just have to make sure we get (the lead)," he said. "We're going to have to work to keep it. They're going to go down swinging. Once you get to a certain point, guys kind of relax and then they just start shooting and those shots might go in. We have to stay mentally tough and move on to the next play. If something like that happens, we'll take it one possession at a time. Usually when we do that, we're the better team and we win."

Off to the side with a much smaller crowd around him, Shane Battier was asked about the tough assignment guarding Carmelo Anthony.

"I learned a lot when I played Kobe in the second round a couple of years ago. It was mentally the most grueling series of my life. He had some big games but I thought I defended him well. What I took from that was you just stay the course, you don't overreact to certain situations. Regardless of what people think, as long as you stay within the team concept and play hard you'll live with the results."

If the results are a much-expected victory against a lesser team that has key players suffering a variety of injuries, then Heat fans will be happy to look forward to the beginning of the next series by the end of the week.