The Miami Heat have officially released the details for their NBA Championship parade and the rally celebration inside the AmericanAirlines Arena on Monday, June 25th beginning at 11:00 AM.

"The parade's one-way route will begin at S.W. 8th Street @ S.W. 2nd Avenue in the financial district of downtown Miami. The parade caravan will head north on Brickell Avenue, across the bridge, curve right onto Biscayne Boulevard and will head North on Biscayne Boulevard. The parade route will end at the AmericanAirlines Arena (N.E. 8th Street). There will not be any sort of presentation on the exterior of the Arena at the conclusion of the parade."

Rally / trophy celebration inside the AAA

"The celebratory rally inside of the AmericanAirlines Arena is a private, ticketed event. Doors to the Arena will open at 9:00 a.m. No admission will be allowed after 10:30 a.m.-no exceptions. Guests are encouraged to arrive early. There will be no public parking on site. Fans attending the rally will view the parade on the HEATV video screen inside the Arena. 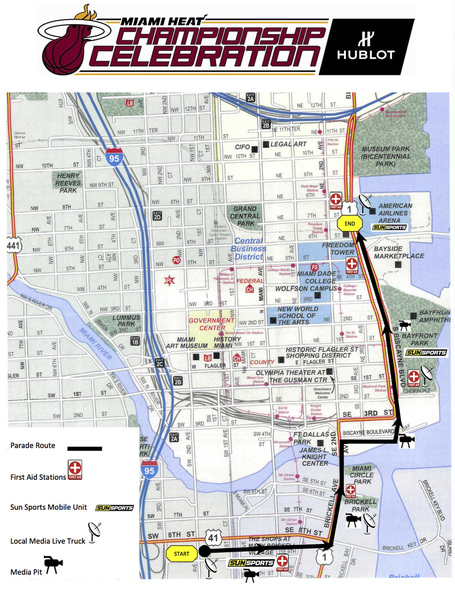