In a gloomy Monday morning devoid of sunlight, the Miami Heat's euphoric NBA Championship Parade brought the city and many of its non-working residents plenty to cheer about.

According to Miami Police Department's account, more than 400,000 Heat fans descended into the downtown area and lined up along Biscayne Blvd to see all of the players, coaching staff, Heat president Pat Riley and owner Micky Arison come together and celebrate the franchise's second NBA Championship.

Heat coach Erik Spoelstra, with all the pressure of lofty expectations finally off his shoulders after two solid years, was all smiles.

"That's a dream we've all been living for was the parade on Biscayne Blvd that rings in your ears for so many days and years," he said. "For that to actually happen is surreal and to see all the fans, as many fans as far as you can see, it's really incredible. Then to be with your friends and family and loved ones on the float, I think the last time in 2006 we had to jump on the back of somebody's pickup truck, and to go through it..it's a little bit different this time. I thought this was really tasteful, the celebration we had inside the arena, very creative and interactive. The players really enjoyed it. That was a great moment to be able to interact with our fans who we appreciate so much."

NBA Finals MVP LeBron James was touched by the large showing of support on a work day that was heavily overcast through much of the day. When he was asked what aspect of the parade was the most memorable, he didn't hesitate to answer.

"The people that came out and supported it. When you're playing in a game you can only get so many people into the arena. You can only get 18-19,000 into the arena, which is a lot, I'm not taking that for granted. But when you have this parade you see twenty times that.

The crowd inside the arena cheered loudly throughout the parade, saving their biggest cheers for the Big 3, Shane Battier and Mike Miller when they were shown on a giant screen on the main stage that broadcast the Sun Sports feed of the parade outside.

Dwyane Wade escorted the Larry O'Brien trophy to the final stop of the parade, the AmericanAirlines Arena which was lined up with fans who had acquired free tickets online while the season ticket holders as well as friends and family members of Heat players and personnel. The show consisted of the Heat players introduced one-by-one with the championship trophy as the centerpiece on the stage. Each player had a chance to speak to the crowd as well as Heat coach Erik Spoelstra, Riley and Arison. 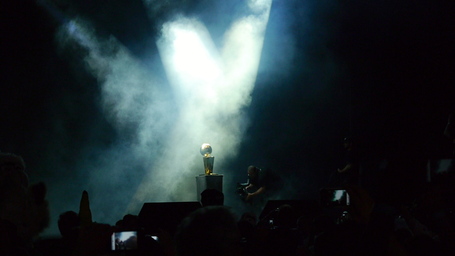 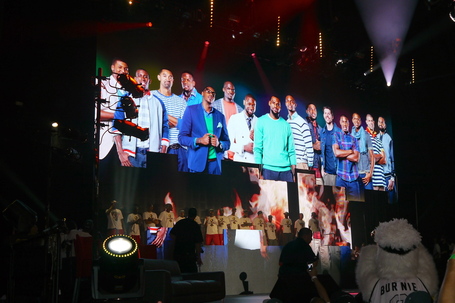 While the crowd was certainly energetic, there were a few times that some of the Heat players were a little exhausted from the celebrations since late Thursday night.

" We haven't got much sleep.... Full party mode," laughed Chris Bosh afterwards. "That's one gratifying thing to find out after you're a champion: you work hard and you play hard too." 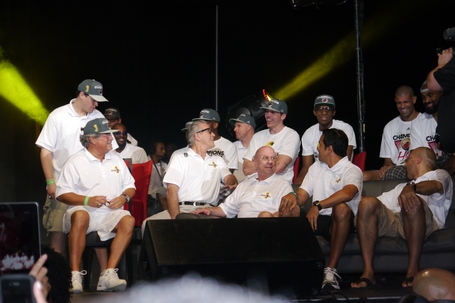 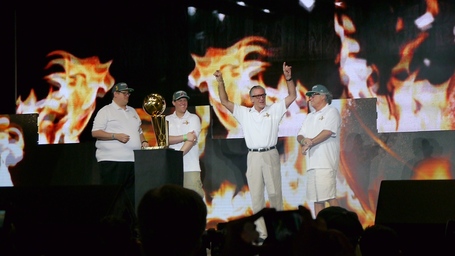 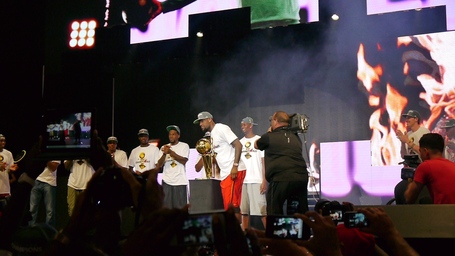 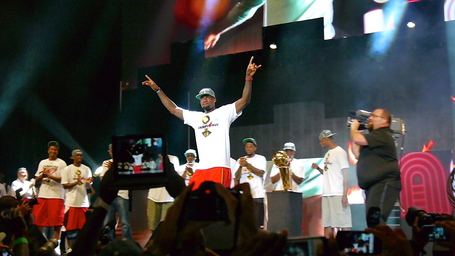 Reflecting on the day's events, Spoelstra was clearly happy to enjoy the championship moment that instead of obsessing over X's and O's for once.

"These are the moments that we all wanted to come together, sacrifice and do all those things, day to day, and then fight through the adversities...were for the moments like this."