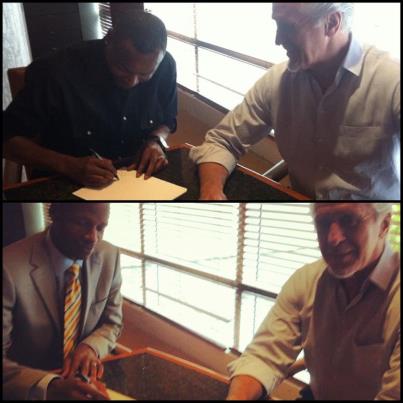 Today was the first day that free agents could officially sign with their respective teams, and the Miami Heat wasted little time getting their newest additions to put pen to paper. Pat Riley and the Heat family welcomed Ray Allen and Rashard Lewis with open arms, giving Miami more weapons to place on the court around LeBron James, Dwyane Wade, Chris Bosh and the rest of the defending NBA champs.

Allen, the leagues top 3-point shooter of all-time, turned down a 2-year, $12 million offer to stay in Boston and took a 3-year deal with the Heat at the mini-mid level amount, which will be a little more then $3 million per season. I agreed with Riley that Allen was the top priority free agent target for the Heat, as having a guy who can knock down open 3's in his sleep is an absolute perfect fit for this team.

Also officially signing with Miami today was Rashard Lewis, a 14-year NBA vet who has been a superstar for most of his career. The past few years has seen his production decline due to injuries (and probably age) but on a team like the Heat where he'll be asked to play limited minutes and wont be a focal point of the defense, it could end up as perfect of a fit for Lewis as any team out there.

It's hard to believe, but after winning an NBA Championship less then a month ago it seems that the Heat are better today then they were back on June 21st when they hoisted the Larry O'Brien trophy in front of their fans at the AAA. It really is quite ridiculous how lucky Heat fans are. This team, this situation, is something that doesn't come along very often in sports, and I couldn't be more appreciative.