Video analysis: How Josh Harrellson can help the Miami Heat

Share All sharing options for: Video analysis: How Josh Harrellson can help the Miami Heat

It appears the Heat have finished shopping for a backup big man to round out the end of the roster.

As reported tweeted by the team earlier and passed along to our readers, Josh Harrellson has agreed to terms on a deal.

For a little more background before we go to a visual break down on how he can help, let's check the data.

Harrellson averaged 4.4 points and 3.9 rebounds in limited playing time for the New York Knicks last season. On a per-36 minute basis, Harrellson dropped 10.8 points and 9.6 rebounds, although he shot just 42 percent from the floor.

What is important to know, however, is that despite his overall inefficiency, Harrellson displayed 3-point range he was never asked to use in college, hitting 34 percent of his long distance shots on 59 attempts in 37 games. It's a dynamic no other post player on the roster outside of Chris Bosh can claim to have, and Harrellson could fit stylistically as a stretch big who can unclog the lane as Dwyane Wade and LeBron James attack the basket, or when the team features post-ups from their two star wings.

With that said, let's look at two plays from last season where Harrellson's floor-stretching ability aided the Knicks.

First of all, we'll look at a semi-transition play where the Knicks push the ball off of an inbound.

Tony Douglas is the point guard in the far right bringing it up, with Harrellson (circled in orange) to the lower left of the screen. 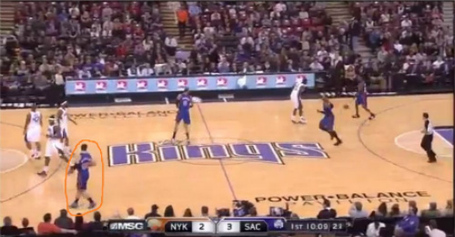 Douglas (circled in white) will advance past some pressure with the help of a Tyson Chanlder pick, and find himself with space to operate with. Here, he can choose to slow everything down and set up a halfcourt play, or he can attack and create for himself or others with the defense on it's heels. Notice Harrellson is already in a comfortable position beyond the arc. 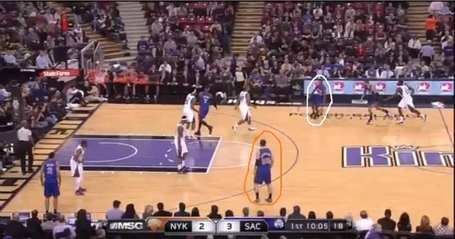 Douglas wisely elects to attack the middle of the floor, forcing Kings center DeMarcus Cousins to step up and play him. Douglas then kicks it outside to Harrellson for a spot up 3-pointer. 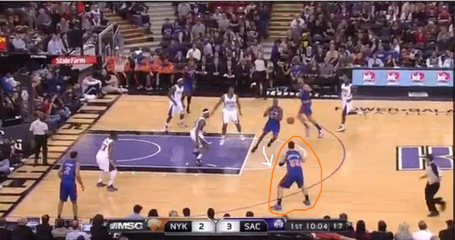 Cousins then has no shot at seriously bothering Harrellson's release, as the ball is already leaving his hands by the time Cousins is even remotely close. This is a clean look for a shooter. Even though Cousins is a young, and moderately mobile center, he wants no part of this situation. Big men on opposing defenses have a duty to prevent penetration in the middle of the floor, and fan things outside, in most cases. When they do, they generally don't have the quickness to close out on perimeter shooters, and Cousins is exposed on this play. 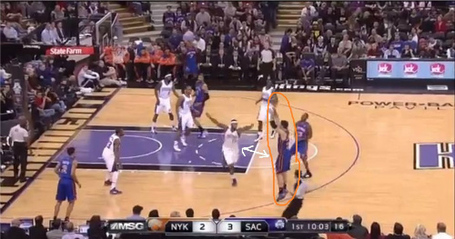 And that is the advantage of Harrellson's unique skill-set brings, because it's already a task for a player to help off of his man and recover to contest another shot, but it's even tougher for a post player to cover enough ground to recover and contest a shot in this situation.

That was just an example of Harrellson's ability to put an opposing big in a tough spot. Now we'll look at a play where he spaces the floor off of penetration from All-Star forward Carmelo Anthony on a drive-and-kick.

The play begins with Douglas penetrating to the right side, drawing nearly the entire Kings defense to him. 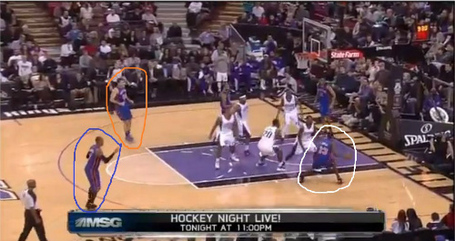 Douglas is forced to come back outside, and he chooses to pass to Anthony (circled in blue) on the deep right wing. Notice Donte Green (circled in black) is initially guarding Harrellson, but gives him some space as he keeps his eye on the ball. 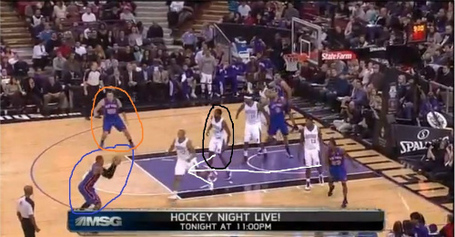 Anthony then drives to the basket, easily getting a step on Chuck Hayes, who has very little shot at containing him in the first place. Green is then forced leave Harrellson alone outside the arc and step in to cut off Carmelo's penetration. 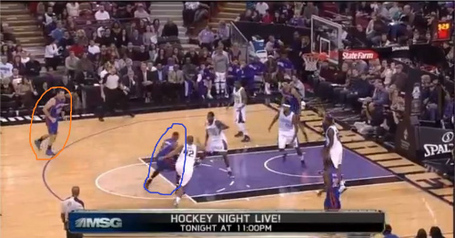 Carmelo makes the right decision and passes it to Harrellson for a wide open look. 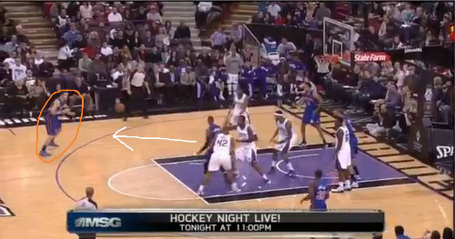 A poor Kings defender tries to fly in late, but Harrellson's shot is already on it's way, and it's another clean look he drains. 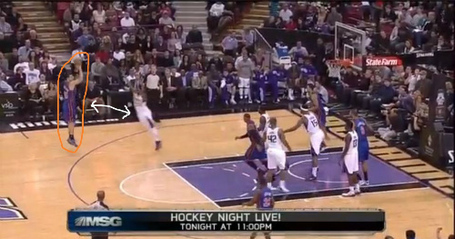 The drive-and-kick scenario here is easy to envision if Harrellson were to share the floor with Miami's starters, because the Heat have two elite scorers on the wing who will often go to the basket, like Anthony, in Dwyane Wade and LeBron James. Chris Bosh already gives those two space by popping out for mid-range jumpers and even the occasional 3-pointer, but Bosh has never consistently knocked down shots from long distance with any type of volume.

If anything at all, the Heat acquired a center with a different offensive skill set than what they already have, so they have the potential to be more versatile and adapt to different matchups. Also, given the heat's personnel, it's always nice to have more, more, more and more shooters.

The Heat aren't going to get any offense from Dexter Pittman, let alone Mickell Gladness or Jarvis Varnado. The very thought of Joel Anthony taking a jumper is absurd. In Harrellson, they have an alternative.

Not to say Harrellson doesn't have lack some of the qualities the other options the Heat have inside can offer (We'll, we don't know if Pittman or Gladness have anything to offer at this stage), but there is one skill he has that very few centers in the world do: Outside shooting.

The 6-foot-10, 275-pound Harrellson is limited athletically and won't ever project to be anything but an average defender. But the signing probably has more upside than any move the Heat could have made at this point in the offseason because of his skill as a shooter.

He'll have a good chance to make the roster, and if he does, he will give head coach Erik Spoelstra a unique weapon on his bench.