Dwyane Wade comes in at No. 8 in annual ESPN ranking; And it's wrong

Two of the Miami Heat's All-Star's have been ranked in ESPN's annual player rankings, with Chris Bosh at No. 18 and Dwyane Wade at No. 8, and ultimately LeBron James will be No. 1. But Wade's placement is off.

Share All sharing options for: Dwyane Wade comes in at No. 8 in annual ESPN ranking; And it's wrong

ESPN's annual player rankings are just about done with, and as it pertains to Miami, there is very little debate about where LeBron James and Chris Bosh deserve to be. Bosh is one of the 20 best players in the league, and was placed at No. 18.

James will predictably be ranked first, and there really isn't any ground to argue otherwise.

It is Dwyane Wade's placement that causes Heat fans a particular frustration, and a segment of NBA writer and fans confusion.

He came in at No. 8 on the list. By all means, he's revered as one of the best players in the world, and his placement isn't a crime. But that doesn't mean it's fair, given that two players (Kobe Bryant, Derrick Rose) are ahead of him and the order doesn't hold up to scrutiny.

Russell Westbrook can make a similar case after being placed ninth in the rankings, but Wade is clearly a more productive player than Bryant and Rose, a conclusion that the advanced statistics support on the surface.

Here's the visualization of it. 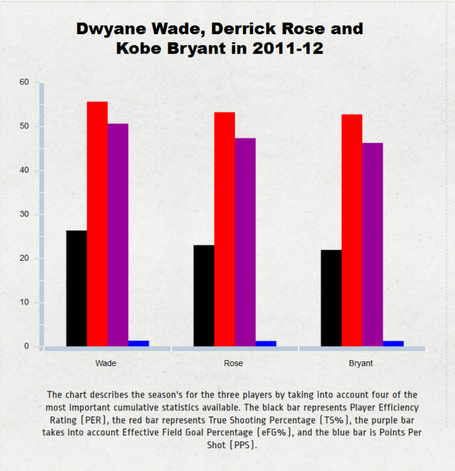 I chose to use those four statistics because three of them accumulate a players scoring efficiency from every area of the court, and one of them (PER) entails overall production. If one player is better than another by all four of these measures, there simply is no way around that he's not the best offensive player in the group. We're not taking into account defensive data, but a quick look at their defensive production doesn't signify a notable difference.

There are other contextual factors that play a part in this.

For instance, it is a fair critique of Wade that he played in nine less games than Bryant last year due to a series of injuries, as well as the fact that he averaged roughly five less minutes played per game than Bryant.

So in that sense, we have to try to weigh whether Kobe's volume contribution was more valuable than Wade's greater per game production.

But then we have ESPN's inconsistency on this, because they placed Rose, who played in only 39 games and had his postseason cut short to injury, ahead of Wade as well.

Nothing is adding up, and this brings me to another point on the matter. What is the criteria for these rankings? Is it taking into account a projection of decline that Wade is certainly beginning to see? Is it based on only last season, or the last two or three?

If Wade is on the decline, than Kobe is assuredly as we'll. If we take into account only last year, than there is zero argument to be made that Rose is a better basketball player than Dwyane Wade.

Here's the way I think rankings should work: It should take into account the last THREE season's, with 60-70 percent of the weight on the most recent season. A single season can be an outlier, and may not represent how good a player is at that point in time. If we go by this, over the last three season's, Wade retains the same statistical edge on Rose and Bryant with comparable minutes and games played.

I can also write a thesis about the national perception of Dwyane Wade and why he is perpetually underrated in comparison to his superstar peers. For full disclosure, I'm a ginormous Wade fan, having grown up in Miami.

We tend to be more sensitive about him, just like every fanbase attempts to protect their superstar. But I also know that the objective data erases subjectivity, for the most part, and I rely on that to make my assertions.

This post was probably born from boredom and NBA withdrawals as training camp opens in a few days, as writing 700 words on a website's subjective ranking of a player is somewhat silly. But I figured I would throw my bomb into the twitter war about these rankings that is currently taking place anyway.