Erik Spoelstra inserted Rashard Lewis at the start of the fourth quarter of the Miami Heat's game at Sacramento Jan. 12. Lewis hadn't played since a blowout win over Dallas Dec. 20, so it probably was good for him to get some minutes and find a rhythm. Lewis promptly made two 3-pointers within the first three minutes of the quarter. Spoelstra then played Lewis in the remaining three games of the Heat's six-game road trip, including crunch-time minutes against the Los Angeles Lakers. Lewis initially only had a chance to play in mop-up duty, but he's subtly made a case for his reinsertion into the rotation in this road trip.

Lewis' most impressive performance came Jan. 14 in Utah, where he helped Miami rally from a 19-point fourth-quarter deficit. But his jump-shooting and overall offensive production wasn't the part of his night that stood out. The former Seattle SuperSonic and Orlando Magic player has always shot the ball well. He even shot well to start the 2012-13 season. Already with a plethora of shooters, Lewis' offense was perhaps a bit superfluous. His inept defense and rebounding led Erik Spoelstra to take out Lewis and put in rugged defender Joel Anthony into the rotation. But against Utah, Lewis competed on the glass and on defense.

Look at the picture below. Lewis jumps over Al Jefferson to grab a rebound with LeBron James right behind him. Upon landing, Lewis lost his balance and fell to the floor after passing to James. But it was refreshing to see Lewis play with effort on the defensive end of the floor. The 14-year NBA veteran grabbed four rebounds compared to Bosh's one board that night because he simply wanted the rebound. Lewis is far from a good rebounder, but he did not simply lay back and expect a teammate to grab the boards. 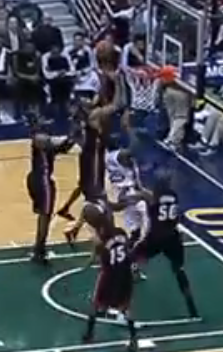 The player Lewis matched up against defensively, Marvin Williams, hardly touched the ball in the fourth quarter of Miami's game against Utah. But the Texas native still showed some good defensive instincts. The picture below shows Lewis deflecting a pass intended for Williams. Mario Chalmers picks up the ball, and Jamaal Tinsley commits a clear-path foul. Although Chalmers only makes one of the two foul shots, Miami scores three points on the possession when James finds Joel Anthony for a dunk on a pick-and-roll. Lewis came over to help on a Gordon Hayward drive to the basket, but had the presence of mind to try to deflect the pass to prevent Williams from getting a wide open look. As a result, Miami scored three points in one possession in a close game. 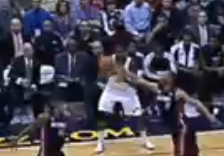 Here, Lewis shows good grounding in Miami's help-and-recover defense. He helped the Heat converge on Hayward, but then had the presence of mind to steal the ball.

Spoelstra's recent insertion of Lewis into the rotation has forced Mike Miller to the bench, though. For his part, Miller played a great game Jan. 10 in Portland, finishing with five points, eight rebounds and four assists in 24 minutes. It's curious that Miller didn't play at all against the Lakers, but perhaps Spoelstra didn't want Miller guarding Pau Gasol (As an aside, I was surprised the Lakers didn't run more offense through Gasol in the second half when Shane Battier or Lewis guarded him. Gasol had a great first half. Even with Dwight Howard, Steve Nash and Gasol, the Lakers' fourth-quarter offense devolves into Kobe-or-bust). Miller is probably a better overall player than Lewis, but perhaps Lewis can play in certain situations in which his length is needed.

It merely started a flurry of made shots in some mop-up minutes. But when given the opportunity, Lewis showed his ability to compete with defense and rebounding. The Heat may have started to turn Lewis into an OK defender. If he continues to compete on defense, he may earn playoff minutes and get the chance to drag opposing power forwards to the 3-point line with his sweet stroke.