A visual display of where Ray Allen's offense is coming from; And why it works

Miami Heat fans have been treated to Ray Allen's outstanding perimeter game this season, and a closer look reveals that the veteran is as precise as ever. Here's the catch: Ray isn't making shots he normally doesn't make. He is taking more efficient shots from the floor.

Share All sharing options for: A visual display of where Ray Allen's offense is coming from; And why it works

Ray Allen has made a lot of adjustments in his first season in a Miami Heat uniform. Among them, the veteran sharpshooter is playing the least amount of minutes in his decorated career. Allen is still averaging 11.6 points in his 26 minutes of playing time, but what is notable is that Allen is doing it on slightly higher efficiency than his time with the Boston Celtics. Even more extraordinarily, Allen is having arguably the best shooting performance of his career.

How is Ray doing this?

An easy and reasonable explanation is to assume that since this Heat team is probably the most talented group he has ever been on, that accounts for easier shots. To some degree, that is true. But that assumption alone would discredit the work that Miami's coaching staff has done to put Ray in a position to take more efficient baskets.

Let's give way to the visuals, courtesy of Vorped. The charts will split Allen's shot selection. 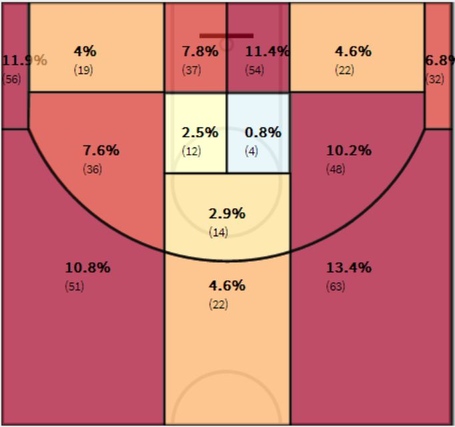 And here is Allen's shot chart from this season. 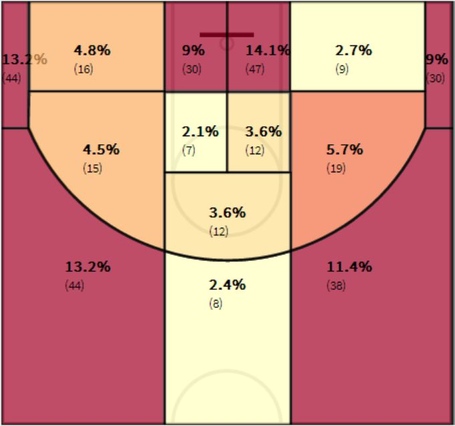 The biggest revelation when comparing these shot charts is the fact that in Miami, Allen has drastically cut down on mid-range jumpers. Those wing jumpers Allen has taken so frequently in recent seasons took up 20.7 percent of his shots last season. This season he is shooting those a shade under 14 percent of the time. He still takes mid-range corner jumpers just as frequently, but it's the long shots from the wing that Allen has taken less of.

According to Hoop Data, Allen is taking just 1.2 attempts per game from 16-to-23 feet. He averaged around three such attempts in his tenure in Boston.

Where are these shots going?

In Miami, Allen has taken more 3-pointers and shots at the rim. Last season was not an anomaly either either, as Allen's shooting splits from 2010-11 are very similar to last year.

Something has changed for Allen since he's been in a Heat uniform.

That leads us to wonder if there is a correlation between the jump in efficiency and the shot selection. The data suggests that Ray is not simply making more shots than usual. The fact is Allen is taking higher percentage shots.

Shot selection matters. It doesn't take an expert to know that shooting closer to the bucket is a higher percentage shot, and that the 3-pointer has an extra point of value. Luckily, some really smart people have chopped up the digits and created metrics to gauge the value of separate shots. One metric I have taken a liking to is Ian Levy's Expected Points Per Shot (XPPS). Based on numbers going back to the 2000-2001 season, here is the explanation:

Given these averages, it is clear that taking less mid-range shots and more attempts in the restricted area and outside the arc is a good move. Not every player's actual skill set fits right into the league average XPPS, but Ray isn't much different. Even though Allen is a very good mid-range shooter, the value of his shots from the painted area and beyond the arc are greater.

When the Heat wooed Allen in the offseason, they sold him on something.

A role in the offense that best utilizes his skill set was the plan. In this case, it involves much less of Allen coming off of multiple stagger screens to get him mid-range jumpers, which was commonplace in Boston. According to Synergy Sports Data, nearly 36 percent of Allen's offense came off of screens last season. This season that numbers is 17 percent. As a result, Allen's spot up opportunities have fluctuated, and he is handling the ball more on the perimeter and getting to the basket.

There has been coverage this season about the way Miami is getting Allen the ball and how deadly his shooting can be when he plays with the Heat's stars. The team's spacing certainly helps, but Allen is also taking more efficient shots from the floor, and his teammates and coaches are maximizing his offensive talents beyond simply just having him play with better lineups.

The Heat have given Allen a role as a primary scorer with the second team, and he has more freedom than he did in Boston.

It would be difficult to think that what Allen has right now is anything less than he expected when he signed with Miami.

The veteran guard has the ability to opt out of his contract this offseason, but realistically, there likely is not any situation on the planet where life would be any easier.