A closer look at the Miami Heat rebounding problem

It's become a disturbing trend at this point, and the divide on the issue comes from two sides. Some blame 'Small ball' and want to add help, and others, like myself, think the answers are on the roster. Let's talk about it.

Share All sharing options for: A closer look at the Miami Heat rebounding problem

One thing we need to get out of the way really fast is this: The Heat have been a good rebounding team since the the core of this squad was signed in 2010 and the Heat made the biggest free agency splash in NBA history.

Several fans and analysts have been critical of the Heat's perceived lack of a prototypical defensive big man, but the construction and versatility of the roster made up for that shortcoming.

But if you're into it, the Heat were 3rd in the league in rebound differential in 2010-11 and sixth in 2011-12. The Heat went 'small' with Shane Battier at power forward in the postseason but their differential barely went down.

So, with that out of the way, we can erase the notion that Miami is fatally flawed with it's roster on the rebounding end. They may not be the best, but it was never a liability until this season, and we should also understand the context of the NBA, where even with a salary cap, the Heat have an embarrassment of riches and can't dominate every single category.

Now we can move along and figure out what is happening this year.

The Heat have been fine with the assortment of washed up big men they have deployed at center the last few years, and have been fine when Joel Anthony has started inside. This season, the Heat have went to Chris Bosh at center, and have gotten 15 starts apiece from Shane Battier and more prototypical power player Udonis Haslem at power forward.

So why is Miami struggling?

Is it Shane Battier's inclusion in the front court? Is it that Chris Bosh isn't a true center?

Let's take a closer look at this.

Regardless of what folks like to believe, the Heat are actually are getting a better rebounder at center right now that anything they have placed out there in the 'Big Three' era. Bosh isn't very good, but Joel Anthony is one of the worst rebounding centers in the league. Anthony has a career Total Rebound Percentage of 11. Bosh and his career clip of 14.6 in that category is passable.

You thought the Heat should have re-signed Ronny Turiaf? His career TRB% is 12.

Zydrunas Igauskas and Erick Dampier would be slight upgrades over Bosh in the area of rebounding, but provide little else and didn't make the difference.

Maybe we shouldn't just point the finger at 'small ball' or 'pace and space' because it's convenient. Even if the Heat were attempting to play more conventionally, which they are since starting Haslem, they likely wouldn't be much better at rebounding.

And it can't be about Battier's play at power forward. He was in the rotation last year for roughly the same amount of minutes, and even though he is guarding mostly power forwards this year, he's in two of the Heat's top three rebounding lineups this year.

You would think Udonis Haslem and his career TRB% of 15.7 would infuse the group on the boards over Battier's pathetic performance on the glass. But look at this:

These are by far the Heat's two highest used lineups this season, one with Battier with the starters and the other with Haslem. For some inexplicable reason, the Heat are a much better rebounding team when Battier is in there. Tom Haberstroh noted this differential before the Pacers game on Jan. 8, which I noticed as I was writing this, and the Heat got pounded by the Pacers last night again.

HOW IS THIS POSSIBLE? Haslem's a good rebounder, and Battier is not. Wait, what?

There are a few theories for this. For one, Battier's penchant for living on the perimeter keeps opposing power forward's out of rebounding position. This creates more space for the Heat's wings to crash the glass. It could also be what Haberstroh notes, which is that maybe having Haslem in the lineup allows other Heat players to relax a little in that area.

But we are still grasping at straws to try to pinpoint what is going on. The Heat have been very good at rebounding with the same rotation in years past, and NONE of the teams individual players have seen a dip in rebounding.

Adding a new player with a reputation for rebounding or a player with plenty of height and girth, would intrigue fans. It's more exciting to get a shiny new toy than to keep playing with the same old one.

But Erik Spoelstra is probably right. The solution is on the roster.

The Heat are a great defensive team because they usually (It's come around after a bad start) are amongst the very best teams in basketball and rotating and recovering on the floor. They trap and hedge pick-and-rolls and usually have timely helpside defense to cover up and holes that may create.

This also creates mismatches, however, and gives the Heat disadvantageous matchups on the glass after a series of switches.

Maybe Spoelstra can make some adjustments on that front.

But this also comes down to effort. If Chris Andersen is added to the team, they likely won't be a very good rebounding team anyway unless they increase their effort. The consistent ball watching is hurting the Heat.

Take this example from a Dec. 31 win over the Orlando Magic, when Nikola Vucevic had an unconstitutional 29 rebounds. Anybody who watches Heat games often can attest that this sequence happens frequently.

The play starts with a familiar offensive option for Miami, a Battier corner 3-pointer. Bosh and LeBron James are in position to follow up a possible miss, with Vucevic lurking behind them. 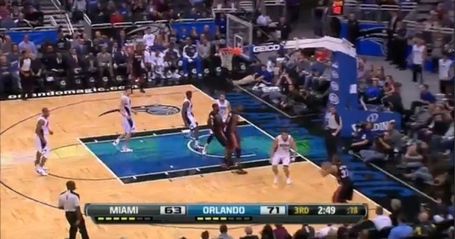 LeBron watches Vucevic slide in for an easy board while Bosh doesn't even bother to box out. 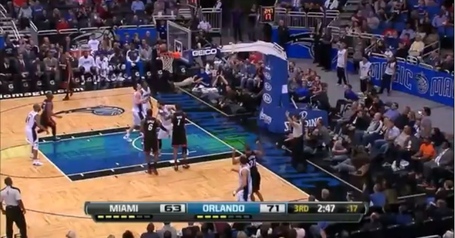 Even as Dwyane Wade makes a late attempt to steal the rebound, Bosh doesn't even try to battle for position. LeBron has already given up on the possession. 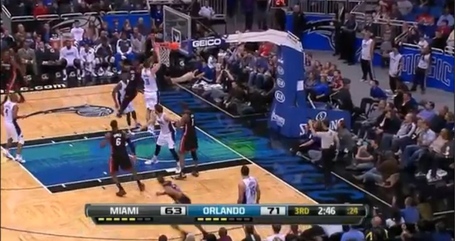 Possessions like these saw Roy Hibbert get a few of his 14 rebounds in the teams loss at Indiana last night. Often times, the Heat seem to have a lack of urgency to rebound.

Although it would seem easy to pin this on Miami's seemingly 'small' personnel, the fact is the team has been a good rebounding bunch with a very similar rotation before. If we have learned anything in recent seasons, it's that there is a reason why a player is still a free agent at this point in the season. No post player out there is good enough to turn this around.

The team splits with Haslem on the floor will likely regress at some point and start to even out some, but the Heat has to make some adjustments, and it's players simply need to step up the effort.

Heat falter again on the road, lose to the Pacers 87-77