The official Hot Hot Hoops preview, part of the SB Nation NBA preview series, is here for your enjoyment as we look at the new season that represents yet another chance for a title.

1. What Significant Moves were made during the off-season? 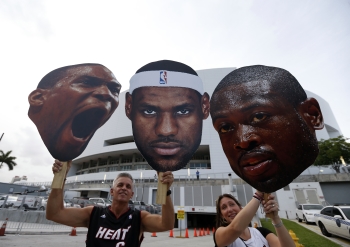 By and large, the most significant moves made by the Heat were simply retaining their two key free agents Ray Allen and Birdman on the cheap. Allen had already sacrificed money to sign with the Heat over the Boston Celtics last summer, he could have opted out of his contract this summer and shopped around. Instead, he quickly announced his intentions to remain with the returning champs and the Heat then locked up Chris Andersen shortly afterwards on a one-year deal for the veteran's minimum with a player option for next season.

There was also the unfortunate amnesty cut of Mike Miller and the savvy non-guaranteed contracts for former lottery picks Greg Oden and Michael Beasley that adds a layer of intrigue to a deep bench. Juwan Howard returned, but now as an assistant coach as part of a larger reshuffling of their front office and management, including the promotion of Andy Elisburg to general manager.

A new partnership with the Sioux Falls Skyforce of the NBA Developmental League was also announced in which the Heat became their sole NBA affiliate in addition to taking over their basketball operations. Subsequently, the Heat brought in longtime Heat staff and assigned the team a new head coach in Pat Delany along with several major changes in their front office including Adam Simon as their new general manager.

2. What are the team's biggest strengths?

Besides having LeBron James, Dwyane Wade and Chris Bosh all on the same team?

Above all, familiarity with the system and with each other. The team is returning virtually intact from their second title run, with Mike Miller the only true notable player not returning. Even then, though Miller certainly had his moments with the Heat, he was not an integral part of last year's regular season rotation and hardly played during their huge winning streak. With so many players returning, the team chemistry should be as strong as ever with the Big 3 accounting for the lion's share of the team's production and the rest of the players - a strong collection of veterans - all fully aware of their roles on the team.

Will this be the end of the Big 3 era if they can't Three-Peat? While it's doubtful, sacrifices will have to be made and Elisburg will have to be even more creative than he was in the summer of 2010 to fit everyone into the roster and not run afoul of the NBA's increasingly punitive luxury tax bill. With so many players returning this season for one more run, it makes you wonder who is actually returning next year with so many contracts expiring and players such as Shane Battier and Ray Allen perhaps retiring. Something tells me, Pat Riley is prepared for all contingencies.

3. What are the team's biggest weaknesses?

The Heat are certainly top-heavy in talent and an injury would be a serious blow to the team. Then again, it's a safe bet that any NBA team would suffer greatly if their star player suffered an injury and had to miss a significant amount of time. The Heat do have the luxury of having three stars however, so Erik Spoelstra may be tempted to reduce minutes from time to time for his All-Star trio and may consider resting Dwyane Wade from entire games to ensure he's healthy for the postseason.

Their lack of height against the likes of Roy Hibbert has been addressed, to a degree, with the optimistic signing of Greg Oden. Birdman returning helps greatly, and Justin Hamilton still has a slim chance of sticking around, but if Oden can be healthy to the point where he can at least be used sparingly for certain match-ups then the Heat would be absolutely thrilled.

4. What are the goals for this team?

It's Three-Peat or failure. It's that simple. The East may be a bit stronger with a few teams improving over the offseason (at least on paper), but the Heat's only goal is to be at full strength and in their best form once the playoffs begin.

His fellow teammates reported that he looked fresh and ready during training camp. But then Wade chose to sit out some of the preseason games, so that may or may not be an indication that he will seek to be on a maintenance plan for the regular season. He also admitted to the media that he may never be 100% again, while also expressing regret over knee surgery he had while at Marquette. We may never know just how much explosiveness Wade has lost, but if he can stay reasonably healthy then the Heat can be unstoppable with LeBron carrying the heaviest work load and Bosh able to step up and be more than just a third option on offense.