After an incredible 2012-2013 season, the Heat look to remind the league that they are the reigning champs with championship themed uniforms.

The Miami Heat outlasted the San Antonio Spurs in the 2013 NBA Finals last season resulting in the franchise's third championship, and their first back-to-back championship. While this has gone unforgotten by much of the league, Miami looks to remind doubters of their strength by wearing championship themed uniforms next week in their opener against the Chicago Bulls. These uniforms certainly will fit the tone of the evening as Miami raises the championship banner. While championship themed the uniforms are not a huge departure from the standard Miami Heat white uniform.

The warm up gear features the Larry O'Brien trophy along with the years of Miami's three championships. 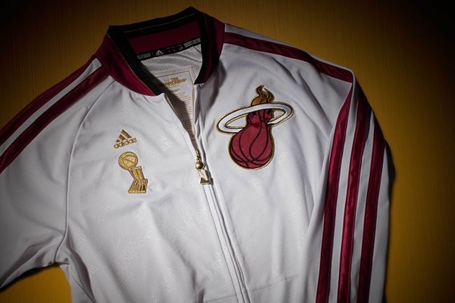 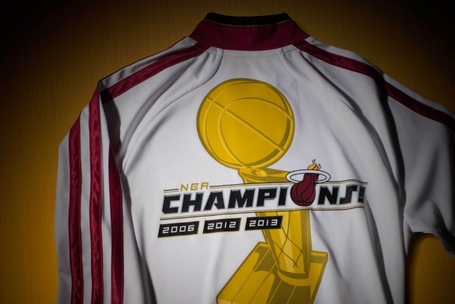 The jersey, features gold in place of the usual red to signify the colour of the Larry O'Brien trophy, and the overall champion feel. If you look closely there is also a reflection type text on the jersey that reads "Champs"

Overall, these uniforms are marvellous. They signify the accomplishment that Miami's trials have resulted in through their design. While these uniforms will probably only be worn once, Heat fans can hope we see a similar championship design at the beginning of next season.

Heat wearing these gold jerseys on night they get their rings (Oct 29) pic.twitter.com/GfL4BijDQL