Check out how Birdman took his game to new heights as he prepared for the title defense over the summer...

We all know that Miami Heat big man Chris Andersen, better known as the Birdman, gives everything he has when he's out on the floor for the back-to-back world champions. But what Heat Nation doesn't see is how Birdman gets in shape and hones his skills during the offseason to get ready for the NBA season.

Hot Hot Hoops had a chance to talk with his personal trainer Tony Falce (@BigTFalce) who was able to give some insight into Birdman's dedication to get into the best of his career and how they utilized the revolutionary resistance-training machine called the VertiMax to get the most of their workouts. It allows athletes to simultaneously improve explosive speed and vertical jump gains, which is precisely what every basketball player needs.

What did you work with Birdman over the summer to prepare for the regular season?

Chris is such a versatile and strong athlete, he's been that way throughout his whole career. So just teaching Chris the proper exercises, such as doing some isolation strength to compound strength are some of the exercises we've done with him. We did a lot of pool work with him this year besides some of the conditioning. He had a little bit of a foot problem throughout the playoffs last season so it was kind of hard for him to do a lot of conditioning so we were able to do some bleachers and some football field runs and stuff like that. Anytime we used strength bands, I had Chris either walk backwards with it or just pull with the heavier tension strength bands just so we wouldn't irritate the foot at all.

How did you use the VertiMax with his training session?

I did a lot of squats and a lot of ab work with the VertiMax with Chris. So we were able to utilize the strength tension bands on the VertiMax to focus on his core. 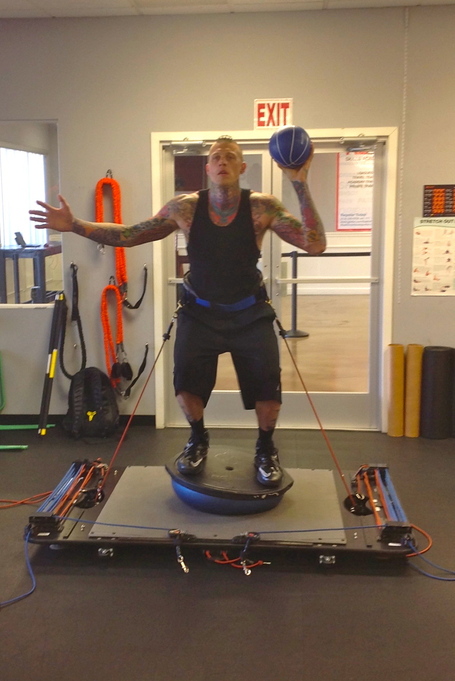 The quality and structure of the VertiMax V8...it's a great product because you can isolate different exercises while you have tension bands on your wrists, ankles, or waist so you can utilize those (as you workout). Other products just can't do that.

I use the VertiMax with all my athletes. It's a great tool and the great advantage of VertiMax is that besides the tension band quality, you can have as high tension as you want or low tension as you want. I have two different ones that have two different types of tension bands on it. So in reality, I have six different tension bands for eight different positions that are possible. So that's what's great, I can use them for the younger kids that aren't as strong but also with some of the pro guys. I had an opportunity to work with JaVale McGee on the VertiMax so I can use a stronger setting on it for Chris or Javale.

How did you get Birdman back into shape when he signed with the HEAT last year?

Well the truth was Chris was basically retired last year (laughs). So we didn't really do any training and we really prepared this year. He was just sitting on his couch and he would work out here and there, he really wasn't doing much when he had an opportunity to come down to Miami last year in January. He really wasn't doing too much training last year but this year is obviously a lot different. We were able to do the training this year to prepare for the season.

We had an opportunity to train at Texas A&M with coach Billy Kennedy who allowed us to use their facility which was awesome. We trained at the Next Level Sports Complex in Los Angeles. So we had some opportunities to train at different places so it was great.

Wasn't he rehabbing from surgery last year before signing with the HEAT?

Yeah, but that was with a physical therapist and stuff like that. He wasn't doing heavy-duty, physical or outright basketball training like you would do to prepare for an NBA season.

Was this offseason as intense a workout regimen as any other NBA season Birdman had to prepare for?

Honestly with Chris, it's always the same. We spend three to four hours, sometimes five hours a day training. So we'll go in, do a workout, have lunch, go right back at it and have a second workout.

Do you scale it back now that he's older or does it not matter with Chris?

Well, with his age now...the truth is he had young legs for 35. There were two years he sat, he had that prior knee surgery and then a year he didn't really play that much with the Nuggets before he was released. So he has young legs for a 35-year-old in the NBA. Most guys at 35 have played 14 years on those legs and they're pretty beat up. Chris has young legs and it's showing right now.

So, again, what we did is to really focus on isolation to compound workout where we really focused on his core. So we did a lot more core training than we have in the past where we did a lot of strength training and that's where we were able to utilize the VertiMax.

What were Birdman's workouts like and what did you use for him?

We did two things. We did bosu ball squats with the VertiMax and we also used a product called Stroops performance bands with Chris where it took all the weight tension from off his shoulders if he was going to do a squat. That way it would isolate the strength to the front of his body or to the rear of his body with the strength tension band so he was just squatting the actual band weight and it wasn't on top of him and on his shoulders.

Did he have any nagging injuries from the prior season that he had to rehabilitate?

He had some nagging injuries that affected him a little bit during the training in the summertime but at the same token, I didn't want go as heavy anyway just because of his legs and where he's at age-wise and stuff like that. You train a 20-year-old differently than you do a guy that's been playing 11 years in the NBA.

How does he continue to work on his conditioning now that the season has started?

One thing about Chris is that he's the first guy that's in the weight room after a game also. So he's working out before and he's also in there afterward and he's riding a bike for 30 to 45 minutes. So Chris is always working on his conditioning.

We'll probably see each other once a month, where either I come here to Miami or I'll go to an away game - most of the time in Los Angeles or when he comes out to the West Coast. So we periodically stay together and if there's anything that he needs or he has any questions and stuff like that, that's where our communications come in.

One of the key things for Chris this offseason was...I've had the opportunity to work with other NBA players and I was familiar with Coach Pat Riley and always told me, when I used to train with Jermaine O'Neal, that he wanted his big guys between eight and ten percent body fat. So when Chris came back in this year, he was at 240 pounds and eight percent body fat so Coach Riley was very impressed and happy with that.

How thrilled was Birdman after winning his first ring and how enthusiastic was he to defend the title and work hard over the offseason?

Once the contract was signed, he was ready to go. With Chris, you never had to say, "Hey, let's go". When I showed up, it was time to train. There was a time this summer where Dwyane Wade, Chris and I were all at the gym at the same time. We were in the weight room, Wade was on the court and then Wade came into the weight room and we were in the court at 12:30 in the morning.

So with Chris there's never a timeframe, he's always ready to go.

Click here for more information on the VertiMax training system. 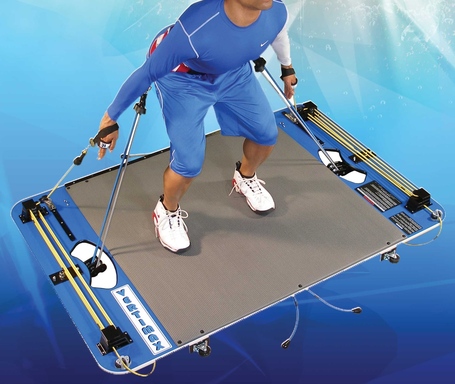