Dwyane Wade's numbers have dropped significantly so far this season but it likely won't last for too much longer...

Share All sharing options for: A closer look reveals Wade is off to the slowest start of his career

If you've watched a lot of the Heat this season, you'd probably agree with the statement that Dwyane Wade has played pretty well.

Through the first seven games of the season, Wade has posted his lowest scoring total (18.4 points per game) since the 2003-2004 season (16.2 points per game), which, as you may recall, was his rookie season.  You might say that's understandable, seeing as Wade has had a declining role in the offense for the last three seasons, and other guys have stepped up.  Fair enough.  But Wade has also posted rebounding and assist averages well below his career numbers, and is turning the ball over more often than we've grown accustomed to.

The good news, however, is that there is reason to expect improvement, and soon. 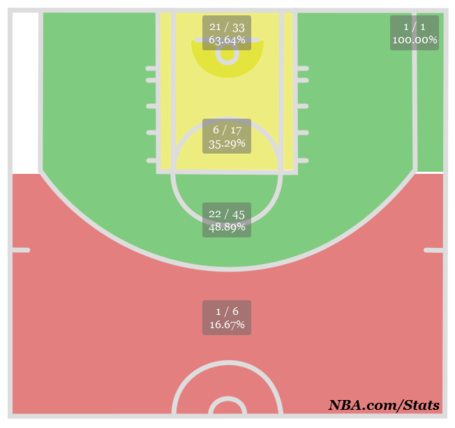 Here was my initial reaction once I saw it:

1) Woah, he's been reaaaally good from the midrange so far this season.

2) I feel like he should be shooting a higher percentage from near the basket.

Fortunately for me, the numbers support my thoughts!

Wade is shooting 6/17 in the paint but outside of the restricted area this season, good for 35.29%.  If Wade continued on that pace, it would be the lowest percentage of his career from that range.

Wade is also shooting just 63% at the rim this season, which is his lowest mark since his second year as a pro.

To put this in to perspective, here is Wade's shot chart from the last postseason, where Wade struggled for large stretches at a time: 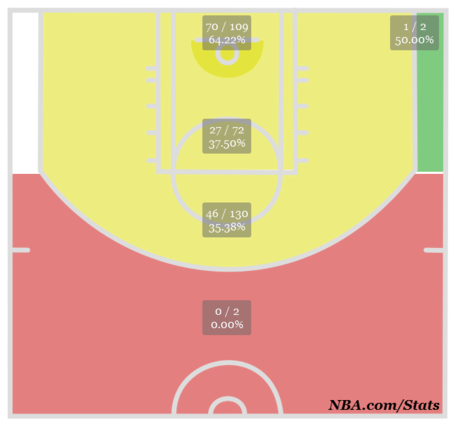 He shot a higher percentage both at the rim and from in the paint in the playoffs than he has so far this season, which was genuinely shocking to me.

On a brighter note, Wade has been deadly from midrange this season, shooting 48.89%.  If the season ended today, that would be the best output of his career.  Wade has managed to improve his outside shooting in part by utilizing better shot selection.  Wade prefers shooting jumpers from the left side of the court, and he has almost exclusively used that side this season.  He's connected on 12/23 attempts from the left of the free throw line, while only connecting on 1/7 to the right of the line.

So what does this mean?  A few things:

1) It's inevitable that Wade will improve his percentage at the rim - he is too talented of a finisher to struggle from that area all year.  He shot nearly 70% from that range last season, and while I doubt he'll be able to replicate that for the remainder of this season, he should get up to around 66-67% from that area.

2) His midrange percentage will decline.  While smarter shot selection is a step in the right direction in terms of Wade shooting better from the midrange, a seven game sample size is too small for me to fully commit to the idea that this production can be kept up over the course of the season.  If he's still shooting 48% from the midrange around the New Year, it might be time to start believing, but I'm not sold yet.

As for what this means for the team, the impact is fairly obvious.  At this stage in his career, Wade's best role is as a slasher, somebody who is consistently cutting to the basket and trying to draw contact and finish layups.  Wade is notorious for his ability to get behind the defense and finish in traffic, but we haven't seen him use that ability to the fullest of his potential so far this season.  As Wade gets going offensively, the Heat will be able to improve on their already incredibly efficient offense.