Lost in the shuffle of the many storylines surrounding the Miami Heat, forward Rashard Lewis is quietly and consistently making contributions off the bench

Share All sharing options for: Rashard Lewis, the forgotten All-Star

During the 2012 offseason, the Miami Heat signed a player that is one of the top 10 three-point shooters in NBA history, a two-time All-Star who once scored 50 points in a game during his 15-year career. The signing was considered an afterthought as Ray Allen, regarded as a traitor to one of the league's most storied franchises, left a turbulent Boston Celtics locker room to join Miami and capture the headlines.

The pattern re-emerged this past offseason when two players with unfulfilled potential, Greg Oden and Michael Beasley, joined the Heat with great thoroughfare, spurring national debates regarding their ability to help Miami win a third consecutive championship.

After a rollercoaster career derailed by injuries while at its peak, one gets the feeling that Lewis wouldn't have it any other way.

When Lewis signed his contract in July 2012, he did so at the veteran's minimum. After playing in 900 games, scoring over 15,000 points, amassing millions of dollars and achieving nearly every individual goal imaginable, his purpose was clear.

"Obviously, I'm hungry to win," said Lewis during his introductory news conference as a member of the Heat. "I played with Orlando and got a taste of being in the Finals, getting close to winning that championship. I'm at a point in my career where I've been on an All-Star team, played 13 years ... my next goal is to try to win a championship."

That goal was achieved last season. It might have been easy for Lewis to walk away, to know he accomplished what many great players have not. Instead, he re-signed with Miami, quietly leaving the headlines for others while he pursues a second championship.

The departure of sharpshooter Mike Miller, a mainstay of the previous two championship runs, and injuries to Dwyane Wade, Allen and Udonis Haslem, have created an opportunity for Lewis this season.

And he has definitely made the most of it.

As reported by the Miami Herald this pre-season, Lewis is healthy for the first time in years and the Heat are reaping the benefits. He has played in nine games, and is averaging nearly 18 minutes per game, 6 points per game and shooting 50% on all field goal attempts, including 10 of 21 (48%) from behind the arc. In Saturday's victory over the Charlotte Bobcats, Rashard played 33 minutes (second most for Miami) and led all players with 9 rebounds, helping the Heat win the team-rebounding edge for just the second time this season.

His shots aren't merely three-point attempts, either. Embracing a team-wide commitment, Lewis joins other long-range shooters Allen and Shane Battier in attacking the rim with increased regularity, as seen below: 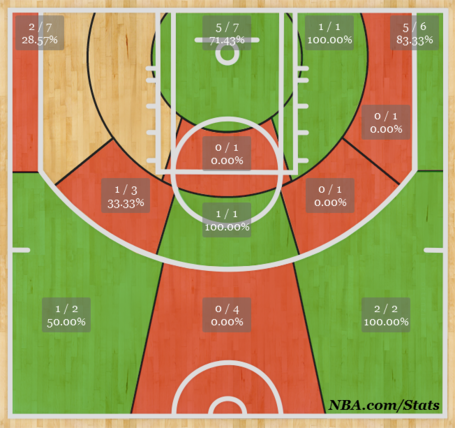 All this for a player many thought might have played his last game years ago, was traded and then summarily waived as salary-cap relief before joining Miami.

Miami is bitterly perceived as a team of bloated egos and contracts, an egomaniacal "Big 3" that has bullied its way to three straight trips to the NBA Finals. Cheated the system, somehow. In reality, the Heat's recent success has just as much to do with the underrated ability to bring in unselfish veterans that are willing to make sacrifices for the greater good; the ultimate team accomplishment.

Lewis, dogged before joining Miami, is the perfect example. He had signed a maximum-value contract with the Orlando Magic but couldn't produce the statistical success to justify his massive pay. Maybe only a few players throughout history could possibly validate that contract, even without nagging injuries. Through three seasons from 2010 - 2012, Lewis only played a total of 85 games. He was washed up, a contractual albatross that was a symbol of league-wide greed and excess, from players and team management alike.

And yet in two years with Miami, Rashard has been the consummate professional. Embracing a team concept, reaching for a shared goal - these are the things that matter most to Heat players. As Lewis explained during last season's playoffs:

"We've got a lot of veteran players on this team. When you're sitting on the bench, you look at the guys who are playing on the court and it makes you more humble. You want to win more than anything. There are other guys on this team, like myself, capable of playing more minutes on other teams, but that's not what it's all about."

Rashard Lewis now stands at 8th on the list of most made three-pointers in NBA history. He is just 10 shots shy of reaching 7th on that list, a milestone he is likely to achieve in the next month. When he does reach this individual record, Lewis, the forgotten All-Star, might not make the headlines.

But as long as he can call himself a champion at the end of this season, he wouldn't want it any other way.