Share All sharing options for: Norris Cole letting game come to him

Amid the early-season turbulence of a dominant opener, an unexpected loss and a bitter defeat to an Eastern Conference rival, it might be easy to overlook the play of Norris Cole. The third-year point guard was drafted out of Cleveland State primarily for his defensive abilities but in four games this season, it is his offense that has provided a boost to the Miami Heat.

Nothing overpowering or dominant. No thunderous dunk or long-range barrage of shots that grabs your immediate attention. Simply consistent improvement that has allowed the Heat to either build or maintain a lead over their opponents this season.

Here are specific breakdowns of how Cole's continued progress has been on display this season:

During last season's playoffs, Norris displayed a fluid jump shot that was a key factor in the Heat's title defense. Beyond the basics of simply hitting the shot, it was the way he did so - confidently and during rallying moments - that showed he was ready to take a step forward in his game. Through four games this season, that step has clearly been taken. Cole is hitting a remarkable 61.5%, and over 44% on a much-improved 3-point shot.

But how has he achieved these high-percentages? His speed and athleticism are ideal in the fast-break, where an opponent's turnover allows Norris to outrace everyone to a quick basket. During half-court sets, Cole frequently positions himself on the wing when handling the ball and looks for an open seam to the hoop. If the seam closes or never opens, his go-to-move has been to dribble under the basket area and look for the reverse layup or, with the array of shooters on the Heat roster, find an open teammate outside the arc.

But his real development has been to adopt the often-preached Heat manta or spacing the floor with outside shooting. With superstar ball handlers LeBron James and Dwyane Wade (and to a lesser extent, an increasingly more-active Ray Allen) cutting to the hoop, Cole has frequently set up along the baseline. If the cutter draws the double team and leads Cole's defender away, Norris has been moving along the three-point line, increasingly ready to catch-and-shoot with more fluidity and confidence.

In Sunday's game against the Wizards, Cole was 3 of 4 from long-range and his ability to get open can clearly be seen here: 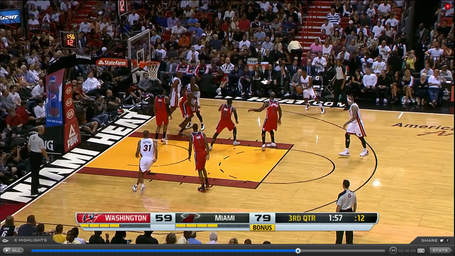 Allen cut to the hoop, drew Cole's defender (John Wall) and Norris was wide open to hit the three-pointer.

And his proficiency extends to both long-range and mid-range shots. Of his total 26 field goal attempts, all but 12 have been outside the paint (as seen in this shot chart by www.nba.com). 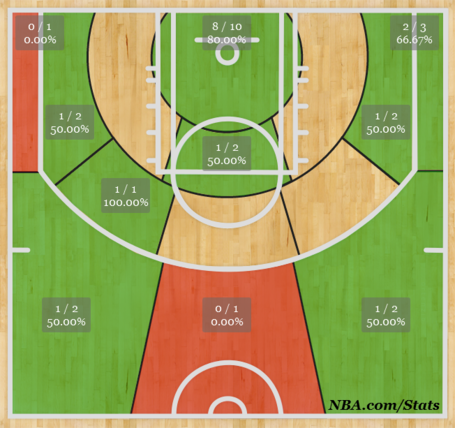 By committing to a style of basketball that allows for frequent passing, unclogged lanes and spacing the floor, Cole joins Allen, Mario Chalmers, Shane Battier and others as an additional long-range weapon.

Cole's floor speed and active feet have never been questioned. Throughout his two-year career, these skills have manifested mostly in a defensive capacity that infuriates opponents. But this athletic ability has been applied in his skills as a rebounder, an improved area of his game. In limited minutes, he is grabbing 3 rebounds per game, over twice his career average. One particular factor has contributed to this increase; his sense of timing.

Watching Cole as he roams the floor, you can clearly see him anticipate where a missed shot will carom toward. This vision - and his ability to close that distance faster than anyone else - is much better. Traditionally, rebounding is a combination of tireless work ethic, athletic ability and timing. Rebounding greats such as Dennis Rodman and Charles Barkley lacked dominating height but maximized these factors on their way to the Basketball Hall of Fame. While Cole will never put up rebounding numbers like The Worm or Sir Charles, his improved anticipation has initiated a number of fast breaks during the season. A small sample size of four games, perhaps, but a reason for optimism among Heat fans.

Offensively, Cole's timing has been nothing short of excellent. In particular, his ability to quickly dribble at a very precise moment is a frequent joy to watch in games. As a defender rotates to cover Norris, watch as he bursts right by, leaving the defender guarding nothing but empty space. Either off the dribble or standing still, he has used it very effectively. But Cole has incorporated it flawlessly when employed in conjunction with a screen. His uncanny sense of exactly when a teammate will employ a screen and how a defender will adjust has been the most improved aspect.

This clip highlights it perfectly:

Argue that Derrick Rose slipped on Chris Andersen's foot, but Rose's misstep was completely a response to the Cole Train blowing by at full steam.

Cole has grown during his tenure with the Heat in numerous ways. Of the many benefits that result from winning two championships, one is his immersion in high-pressure situations. As noted before, Norris has responded well, particularly in last year's playoffs. While a number of young players might never go deep into the postseason, Cole has never known anything but NBA success. Moreover, he has been regularly surrounded by a number of players who will eventually be enshrined along Rodman and Barkley in Springfield, Massachusetts. By being exposed to the highest caliber of player and actual game experience, Norris Cole has matured at a greatly-accelerated pace.

Cole will occasionally defer ball-handling duties to James, Wade and Allen, but it hasn't been forced or disrupted the flow of the game. In fact, he enjoys a certain level of discretion while initiating the offense. His ability to decide who gets the ball - or when to create his own shot - is a trait that other young players might lack when surrounded by Hall-of-Fame teammates.  Cole has even enthusiastically ordered a superstar around, communicating clearly and loudly that they should rotate over on defense or position themselves differently when guarding an inbounds play. His ability to direct players and shape the flow of the game is the true essence of a point guard. Traditionally known as a floor general, the well-experienced Cole has clearly embraced this leadership role.

Watching Cole's development has been a pleasure for Heat fans this season. Once considered a weakness for Miami, the combination of Mario Chalmers and Norris Cole has evolved into a position of strength, one that will likely be reinforced with more experience. When looking at how Cole has become a toughened leader on the hardwood, it brings to mind a quote from another Hall of Famer, Earl "The Pearl" Monroe. The Baltimore Bullets and New York Knicks legend had this advice for young players in the NBA, a code that is seemingly applicable to all walks of life:

Just be patient. Let the game come to you. Don't rush. Be quick, but don't hurry.

Even as he blurs along the court, Norris Cole seems to be taking these words to heart and is moving at the perfect speed.