Recap: Heat hold heads high as they lose to Pacers

The Heat weren't happy with losing but also understood that games in December mean very little.

Share All sharing options for: Recap: Heat hold heads high as they lose to Pacers

The media tried to hype up the Miami Heat and Indiana Pacers December 10 match-up like it was a statement game that will define the season. The Heat were having none of that. Both Chris Bosh and LeBron James shrugged off ideas that this was more than just their 22nd game of the season.

Meanwhile, the Pacers handled it differently. Roy Hibbert and Lance Stephenson both claimed it was much more than just a game. Lance went as far as saying that he would treat this game like the NBA Finals, as if he knew what it was like to be there. 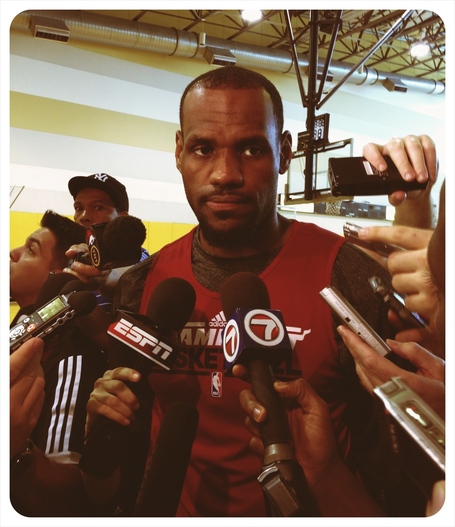 "What is a rivalry these days? A rivalry is Celtics-Lakers. They met like four out of five years. Bulls-Pistons [in the Jordan era]. Those are rivalries. We've played these guys two years in the playoffs and guys automatically make it a rivalry. There's no real rivalry in the NBA these days. You don't see the competition enough. These teams are really, really good teams striving to win a championship. But rivalries, man? There are no more rivalries. It's the truth. I've thought about that. There's no more rivalries. There isn't. Cowboys-Redskins is a rivalry. Ohio State and Michigan is a rivalry. Duke and North Carolina is a rivalry. We're two teams that have the same aspirations, and if we happen to meet again, then possibly. But everyone wants to classify it as a rivalry. It's not."

Regardless, the Pacers came out on top in the first match-up of the almost certain destine Eastern Conference Finals teams. Despite Miami having a great first quarter and all together good first half, the Pacers as usual, used the third quarter to bust open the game. Going into the fourth up four, the Pacers didn't relinquish the lead. They won the game 90-84.

Roy Hibbert led the way scoring 24 points on 10-15 shooting. He only grabbed 5 rebounds, but he routinely got to the position he wanted in the paint and that was the difference in the game. Miami held Paul George without a field goal for the first 32 minutes of the game before he reeled off some jumpers.

For the most part, Miami played a good offensive game, they just had trouble converting. They often got the look or looks they wanted but the shot or layup didn't drop. The Heat shot 4-21 from downtown which is not productive enough to beat the Pacers. Pacers shot 50% overall and held the Heat to only 84 points. Miami sure missed some offensive production from Michael Beasley.

Udonis Haslem was held out of the game as Spoelstra elected to go with Rashard Lewis for 21 minutes off the bench. The Heat didn't have enough dominant performances. James led Miami with 17 points and 14 rebounds. Dwyane Wad also had 17 and Chris Bosh had 12. Other than Chris Andersen's 10 points, the Heat had no other double figure scorers.

But they didn't put their heads down.

"I thought we got some really good looks in the second half that just didn't go down for us. For the most part, we played a good game" said James. "It's a long season. You don't hang your head on one loss."

Dwyane Wade also chimed in saying, "Overall I liked our effort, we're going to learn from this. We'll be fine."

And that's the right attitude. In the nature of the NBA, each marquee game will change the attitude of a fan base and the national media. But, the Heat and the Pacers face off in Miami next week. If Miami wins, we will have a new way of seeing things.

The Heat have been here before. Some teams give the Heat some trouble and that is true with the Pacers, but there is also a reason Miami has won consecutive playoff series against them. It's a long season, and only 1/4 of the way through.

But, at 16-6, the Heat can't afford to diddle around too much because the 19-3 Pacers are looking for the top spot in the East, and the Heat are their only competition. The Heat will spend the next two weeks at home before going to the west coast for the Holidays.