As part of the NBA's "Name Collection" campaign it's been revealed that Ray Allen will wear a J. Shuttlesworth nickname January 21st, March 12th and April 8th

The role of Jesus Shuttlesworth, a high-school superstar plagued by the irresponsibility of his incarcerated father was popularized by Heat sharpshooter Ray Allen in Spike Lee's "He Got Game".

Of course due to the film's cult following (especially among basketball enthusiasts) the nickname of Jesus has thus followed Allen throughout his entire career. LeBron even interjected a "Thank You Jesus" comment directed at Allen during the 2013 ESPY's.

It appears as if the moniker of Jesus Shuttlesworth will once again follow Allen into the nickname jersey games. Slam Online has revealed, courtesy of sheltonjlee's (i.e Spike Lee's) Instagram post Ray's jersey for the January 21st and March 12th and April 8th games. 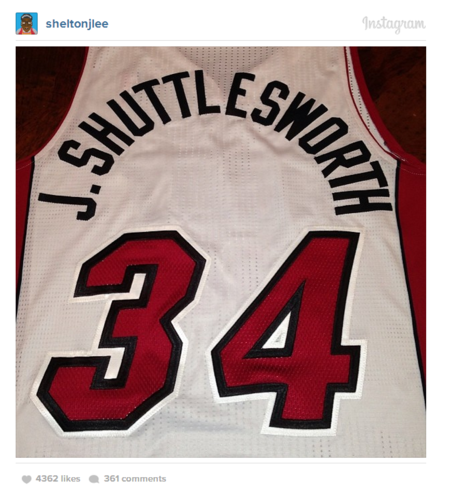 As far as I know thus far, this is the only nickname jersey that has been revealed, but nevertheless they look great. I'm anxious to see what other nicknames the "Heatles" will be sporting come January 21st.