Unseen Highlights of 2013: Behind the scenes with the HEAT in Portland

The last time the Miami HEAT played in Portland, something very special happened. But you may not have seen it.

Share All sharing options for: Unseen Highlights of 2013: Behind the scenes with the HEAT in Portland

With the Miami HEAT playing in Portland tonight, I’m reminded of one of my favorite Miami HEAT moments in 2013. It happened the last time they played there, but it was not in the bright lights on the court. It was in the shadows of the hallways behind the scenes.

Through a HEAT Media retweet, I became aware of the story of Joey Cawyer via #MeetJoey. Joey lived in the small town of Cheney, Washington and was a HUGE LeBron James fan but Joey had been diagnosed with stage 4 brain cancer and now at 23, the fight was getting much harder. Joey’s family and friends arranged to take him to the Rose Garden to see the Miami HEAT play the Portland Trail Blazers and his friends decided to start a twitter campaign to see if they could get LeBron to actually meet Joey!  The #MeetJoey twitter campaign had stories attached from people who loved him deeply and wanted to make this small town guy’s dream come true. It spread to people who had no idea who he was but wanted to help regardless. 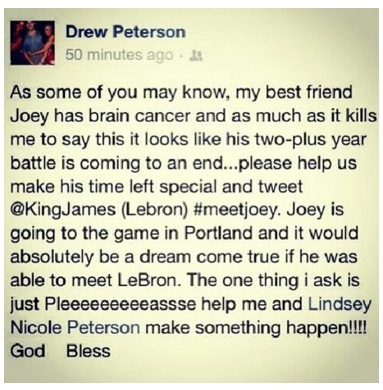 When I reached out to a source close to the HEAT and was told that these things are hard to verify when they don’t come through the "right channels," I understood exactly what that meant.  LeBron and other NBA players have, no doubt, been duped before.  However, I had no doubt in my mind that this was right.  Something about the love and sincerity in the posts of his friends lead me to believe with my whole heart that these were just small town folks trying to reach out to this big time star and make  their beloved friend’s dream come true before it was too late.

They would have to drive a couple of hours with Joey in fragile condition to get to Portland, but it was a dream come true not only for Joey to go but also for his friends and family to make Joey so happy.  At this point, Joey appeared to be nearing the end of his battle.  He kept a cheerful and positive demeanor, but it was obvious to those close to him that time was of the essence.

New updates on #MeetJoey said that they had made the right connections and were going to have the chance for Joey to meet LeBron after the Blazers game. I hoped and watched and prayed. I wanted it to be real. (I’m kind of a romantic that way.) When they said they were going to be sitting courtside, I knew it would be a special night no matter what. 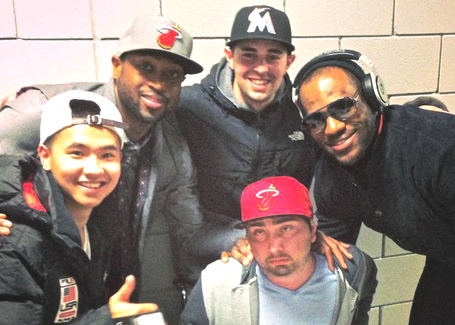 Then the pictures came in.  It was perfect.  Not only did Joey meet LeBron, he also met Dwyane Wade, Ray Allen, Erik Spoelstra and many others. Each of these guys took the time to meet Joey along with his friends and family, sign his HEAT hat, take pictures and share a few laughs.  It made Joey’s night, it made his friends night, and it made the night of all those who followed the #MeetJoey twitter campaign.  It was obvious through the pictures that the story was real, that Joey was really in his final stages of brain cancer and that his dream had come true at just the right time.

Timing is everything in basketball and in life. This act of kindness was timed perfectly.  This whole story begs the question, if our HEAT players can take 15 minutes from their busy schedules to bless a fan and his family, what can we do? What difference can we make in someone’s life when no one is looking?  Will 2014 be the year we get outside our lines of comfort and take a minute to make a moment that will brighten someone’s day? Someone’s life?

Like the stars that they are, these guys shine brightest when the lights are off.  Cross court alley oops and windmill slam dunks are exciting. They make us all stand up and scream with pride and a part of us wishes we could be that guy. But the stuff that happens outside the lines, off the court, sometimes in the back of another team’s arena, that’s the stuff that changes lives and inspires us, in a very different way, to actually become that guy. And we can. Even when no one is looking. 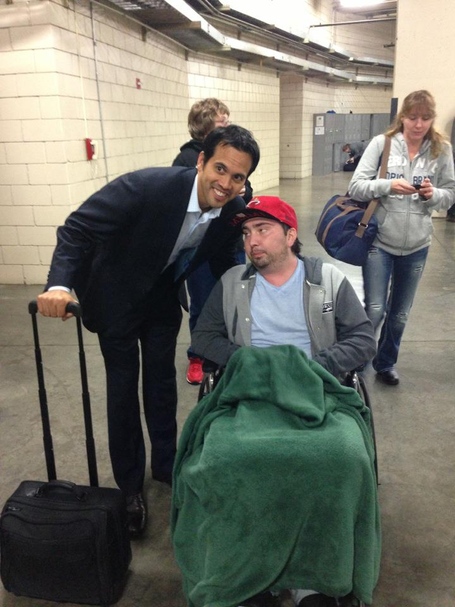 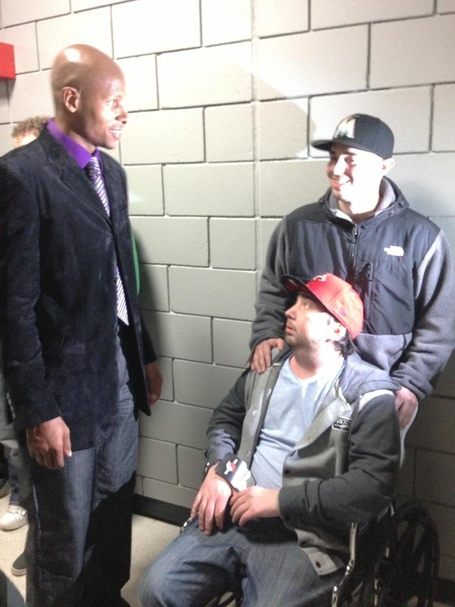