After defeating the Oklahoma City Thunder in five games in the 2012 Finals, Miami beat the Thunder on Christmas day, 103-97. The teams will face off on Feb. 14 at 8 p.m. on TNT with OKC is looking to extract any sort of possible revenge. How can the Heat keep beating OKC?

With the recent play of LeBron James, which has slayed impressive team and league records, he has earned comparison's to former great(s). Well, we know who.

Along the way, sometimes that gets in the way of appreciating the greatness the 28-year-old is exhibiting on a nightly basis. LeBron can never be anyone else to nostalgic NBA fans who may have a bias toward the past, but maybe the era he is playing in can someday be revered as such.

If James is indeed entering the peak of his prime, it's fair to say Oklahoma City Thunder forward Kevin Durant is right on his heels, and the Thunder are the biggest obstacle the Heat have to defending their championship.

If Miami's duo of James and Dwyane Wade is the best in the league, than it is more than fair to say that Durant and sidekick Russell Westbrook are on their heels for that label as well.

We may be entering what is developing into a golden time for the NBA, with Durant and James playing on title contenders and possibly battling for multiple championships.

When the Heat visit OKC for a Feb. 14 game at 8 p.m. on TNT, we will get another treat in this compelling matchup.

It's easier said than done, though.

BOTHERING THE THUNDER AND WESTBROOK

You can't stop Oklahoma City. You can only hope to take away a few of the things they do. According to Synergy Sports Data, the Thunder get 1.07 points per possession on spot ups and 1.23 points per possession in transition, where they absolutely destroy people. The Thunder throw in isolation's, pick-and-rolls and post up's to get another chunk of their offense, rather efficiently.

Kevin Durant is most likely going to get his, and Shane Battier will only be a human sacrifice during the game.

But the Heat have one thing they can hang their hat on in this matchup: They have Russell Westbrook's number.

The All-Star guard shot 43 percent in the Finals, which was nearly three percentage point lower than his 2011-12 regular season mark. But that looks good compared to his regular season results against the Heat.

We're talking about a solid chunk of games here, and the more he produces lackluster efficiency against this opponent, the more it doesn't appear to be coincidental.

Why does Westbrook appear to struggle against the Heat? For one, Miami is a very aggressive team in defending pick-and-rolls, often trapping them. When a defender does beat it and drive to the rim, Miami is quick to collapse and clog the paint. Westbrook is a good passer, but often falls into a habit of bad shot selection, right into Miami's hands.

In his only matchup this season against Miami, Westbrook got to the line 12 times, but only shot 5-of-19 from the field. For Westbrook, it's a laboring task to attack a defense that prides itself on stopping what he does the most, and he plays in the pick-and-roll on 35 percent of his possessions.

Take these possessions, for instance: 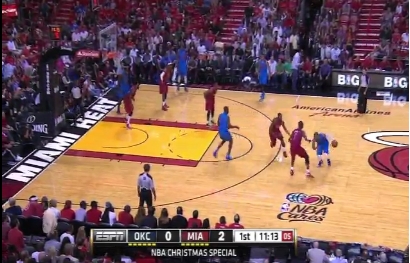 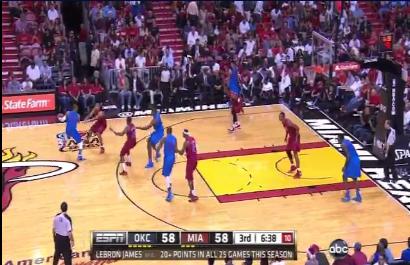 On these two plays vs. the Heat earlier in the season, the Heat did what they typically do. They ran an up-and-over hedge on the ball handler, with a defender aggressively coming out and steering the ball handler outside as the primary defender rotates back.

Westbrook is a terrific athlete, and he will go the other way or even split this at times, and you can't always stop it, but there is a reason why this particular defense puts him in a tough position. For one, Westbrook has a tendency to over dribble in the halfcourt, and the extra second or two that a hedge takes away from Westbrook attacking often puts the Thunder in a low shot clock situation where Westbrook is forced to shoot a shot regardless.

On these two possessions above, Westbrook pulls up for jumpers, which aren't high percentage shots for him.

Westbrook doesn't have very savvy shot selection, so unless he were to be decisive and make smart plays throughout the game, he's due to chuck up a handful of bad ones.

For any guard that lives for the screen and roll, consistently having to work to split it and beat a hard hedge is an exhausting task, and for Westbrook, its been a nightmare.

We'll find out if he is going to react any differently to it this time around, but his offense is necessary considering the matchup problems the Heat present on the other end, where they will get theirs.

This isn't the only reason Miami has OKC's number, but it's worthy of mention.


For a look at the Thunder's view of things, check out Welcome to Loud City.