Dwyane Wade has made some adjustments in his game recently, and his efficiency is flourishing because of it. Among the changes, Wade has become one of the best post players at his position in the game. Hot Hot Hoops will diagram one of the play's the Heat draws up for Wade as an example.

When assessing Dwyane Wade from a distance, the notion is that the 31-year-old is a player with fading athleticism in decline. It's natural, after all. But while the notion of this in itself is not untrue, the perception that Wade relies on his athletic ability to produce, and therefore will come to crashing halt sometime soon, is apparently amiss.

A youthful Wade was once a terrifying isolation threat with the best crossover move in the game. He was a threat to put your best post defender on a poster and make the opposing team look like a crew of jugglers and clowns in his circus. He was the ringmaster of the American Airlines Arena, and he did something special athletically every night.

The high flying act is still a part of his game, but it is tempered, almost as if Wade is calculating how many jumps he has left in his body and pacing his way to the season's finish.

I like to think of it as his third phase, after his fast rise in his early-to-mid 20's and his peak in his late 20's. Dwyane Wade is developing his old man game, folks. He still has some fulminant displays of acrobatics, but they come less often. And while his athletic peak was a joy to watch, the things he's doing now deserve a different kind of appreciation.

And it starts with what the 10-year pro is doing in the post, where he is playing with his back-to-the-basket more than at any point in his career -- And excelling.

Wade's game has evolved in several ways. The biggest differences to note is the decrease in isolation's and plays as a pick-and-roll ball handler from the first two phases of his career. This has coincided with an increase in post-up plays and cuts, as Wade has developed into a timely slasher off the ball. Here is a look at Wade's progress throughout the years, courtesy of Danny Martinez of Heat.com. (You can see a few more interesting tables on Wade from Martinez here.)

For a snapshot of this, if we go back to the 2009-10 season, the last time Wade was the primary ball handler and leading scorer for the Heat, he played in isolation's 19 percent of his possessions, and handled in pick-and-roll's for 29 percent of them. He posted up just six percent of the time.

Flash forward to this season, and Wade isolated on 16 percent of his possessions and play's in the pick-and-roll 28 percent of the time. That may not seem like a big difference, but Wade is posting up 10.5 percent of his plays, according to Synergy Sports Data.

His effectiveness has actually not changed very much at all doing these things. He's still a very good option in the pick-and-roll and in recent years, has been successful in his post up attempts.

But the difference is the volume.

Over the last two season's Wade is posting up considerably more than at any point in his career.

How is he doing this?

Apparently the Heat are making an effort to establish the veteran superstar down low.

WADE ON THE LEFT BLOCK: The baseline pin-down screen

In post-ups, Dwyane Wade is most comfortable operating on the left side of the floor. This chart, courtesy of Vorped, gives us an indication that Wade enjoys working on that side more so than the right. 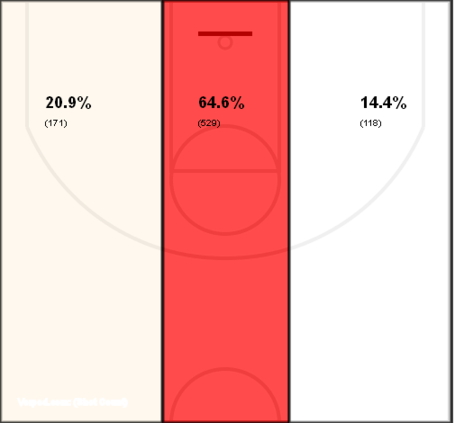 I don't have the numbers to tell me exactly how many of his post plays are coming from the left SIDE, but I'm fairly certain it's the majority of them in observing Heat games.

The Heat know this, and like to run a baseline pin-down screen to get him there with a passer on the left elbow ready to deliver the goods. I chose to cut up this play because it actually displays two things Wade has turned to more than ever recently, moving off the ball and posting up.

The play is an out-of-bounds sequence against the Brooklyn Nets earlier in the season.

Mario Chalmers is the inbounder. He will get the ball to Rashard Lewis above the break while LeBron James fights for space on the left block. Notice Wade in the right corner, guarded by Keith Bogans. 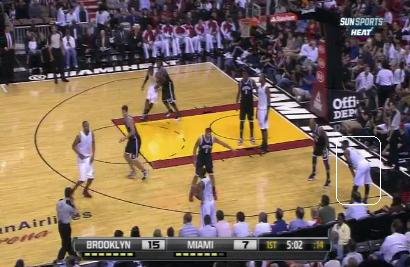 Lewis passes the ball to James on the left elbow. Wade see's daylight as Chris Bosh preps to set a screen, and you can see what he see's as the play develops. 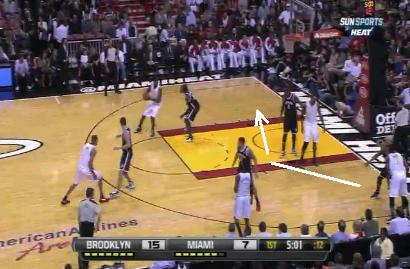 Wade gets to work, and James is anticipating it the whole way. 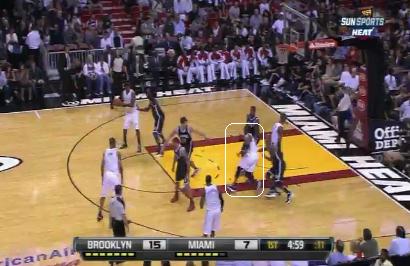 Bogans chases Wade but cannot prevent the post entry pass. This is where Wade thrives, and without help, the Nets are leaving Bogans on Wade island on that left block. 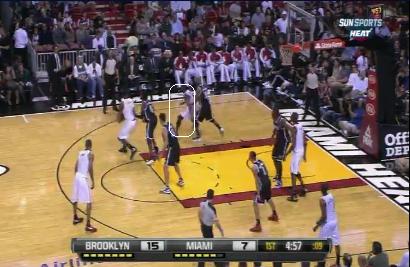 The play progresses as Wade goes to work. James immediately dives across the floor to space the defense. And the result, is this: 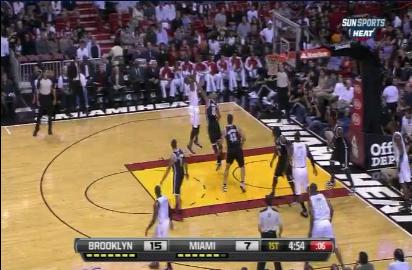 Dwyane Wade taking a shot that close to the rim is a very, very high percentage opportunity. According to Synergy, Wade is getting 1.05 points per possession on post up plays this season, and shooting 52 percent on them. Wade posted up on 12 percent of his possessions last year, shooting 45 percent in them, which was solid as well.

Come to think of it, a lot was made of his over scrutinized star teammate, James, and his transition to playing offense in the post more often after the 2011 Finals, but Wade has added post play to his game roughly as much as James has, who posts up on 12 percent of his possessions this season at a 46.5 efficiency clip.

Such is life for Wade though. Still a superstar, but James' transcendence is so bright that it often leaves Wade in the dark.

Wade's process of scoring in the post can go a few ways.

He likes to come toward the middle and release a floater off the dribble, like he did in the example on the baseline screen. If I had to pick, I would say that is his go-to move.

Wade also likes to go to a turnaround jumper in the post, which is pretty much un-blockable. He goes either way with it and sometimes does a few pump fakes before letting it fly. He can also do a spin move and take you baseline off the dribble and he occasionally faces opponents up.

All in all, Wade is a pretty polished post player at this point, and he's doing damage.

We're entering the third phase of his career, and we should continue to see a good chunk of his plays come inside the post, where basketball enthusiasts can have the thrill of watching him work and can enjoy the aesthetics of good old post play.