Heat extend winning streak to 27 in blowout of Orlando

LeBron James had 24 points, 11 assists and nine rebounds as the Heat pulled away in the second half to defeat Orlando 108-94. Chris Bosh added 17.

Share All sharing options for: Heat extend winning streak to 27 in blowout of Orlando

The Heat showed some natural disinterest, but it gets to a point of laughable toying with opponents at times. Take a lead, let it go, take a lead, let it go, and then they say 'Hey let's try' and blow you off the floor. Orlando was the team getting blown off the floor by another series of deadly Heat runs in a 108-94 victory than earned Miami their 27th consecutive victory.

The Heat led by as much as 20 despite missing Dwyane Wade for the second game in a row.

Chris Bosh added 17 points and Mario Chalmers added 15, but Miami's defense was once again strong. The Magic (18-53) shot just 43 percent from the floor.

Perhaps what Miami misses most without Wade is his defensive impact, particularly his defense presence that leads to transition offense, where Miami scored just 11 points. Miami (56-14) turned the Magic over 13 times. Miami was, as usual, too much offensively anyway. The team went to the line 29 times (Making 19) and shot 47 percent from the floor for the night.

Jameer Nelson led the way for Orlando with a barrage of 3-pointers, finishing with 27 points. Tobias Harris added 20 as well.

Miami is now six games away from the All-Time NBA record of consecutive wins, which belongs to the Lakers (33).

The will play at Chicago on March 27.

LeBron James had a strong reaction after the game and interrupted a post game interview with Chris Bosh and sideline reporter Jason Jackson to express it. Thankfully we have evidence. 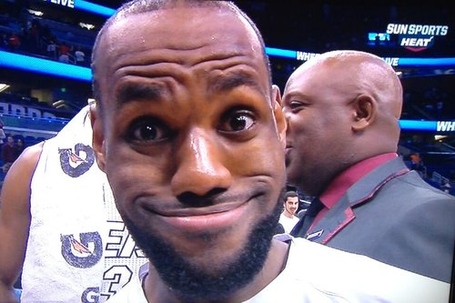