Miami Heat's LeBron James and Dwyane Wade considered some of the best dressed athletes in the NBA, along with Chris Bosh and Shane Battier according to GQ magazine.

Share All sharing options for: Miami Heat, Best dressed team in the NBA?

In this new era of NBA fashion, the walk from the team bus to the locker room on game day is a lot more than what it used to be. It's no longer a dull, boring tradition that no one cares to pay attention to. In fact, it sometimes seems that trendy new NBA "runway" is getting just as much attention as the games. With commentators from the top sports networks such as ESPN, TNT, and Fox Sports all weighing in on the different fashion statements, players now use this pre-game ritual to strut their stuff on this virtual catwalk of the NBA.

We aren't sure that NBA Commissioner David Stern knew exactly what he was getting into when he made the decision to implement a new dress code for game days; dress slacks or dress jeans, dress shoes or dress boots, collared shirts, no chains outside of clothing, etc. Seems simple enough, right? Leave it to the stars athletes turned fashion moguls of the NBA to take the term "dress code" to a whole new level. Though the new rules caused some controversy at first, it didn't take long for the players take advantage of dress code; using it to show off their own keen sense of fashion and express their individuality.

Whether it's red leather pants and lens-less glasses (often spotted on players like Russel Westbrook), conservative two-piece suits (usually found on Kobe Bryant), or a beaver-fur bomber hat (recently spotted on Dwyane Wade) it doesn't take much to realize that fashion in the NBA has sky-rocketed since the implement of a game day dress code in 2005. Now all of the big name players in the NBA can be seen showing off their own unique fashion sense, creating what seems to have become an off-court battle for who could be seen as the NBA's best dressed. And guess who has landed themselves a spot at the top of that list; our very own LeBron James, Dwyane Wade, Chris Bosh, and Shane Battier.

The Miami Heat superstars recently spoke with GQ Magazine for their April "Style Bible" Issue and discussed their individual styles and their views on fashion.

"Fashion is fun to me." Wade tells GQ Magazine. "I feel like the way that I dress says a lot about my personality. A lot of people will not get a chance to talk to me, but when they look at me, they can get an idea of who Dwyane Wade is." We hear you Dwayne, the pink-chocolate-yellow patent leather Louboutins you rocked at the White House showed us just how fearless you really are.

Though Wade has been known to take the most risks for fashion, many of his teammates would also be classified as "runway-ready" but in a more simple way. Chris Bosh told GQ that he and LeBron like to go for the more "stylish and comfortable" look, while Shane Battier describes the look he typically aims for as "suburban-dad hot." As you could probably tell from the video bombs that have become almost routine during post-game interviews, the Miami Heat guys like to have fun. So for them, fashion is just another way to express their fun side. Style "smack-talk" is constantly being dished out in the locker room according to Battier. He explains that, "it's when they stop talking about you that you know you're in trouble." Despite the style differences amongst teammates, these superstar athletes who have already conquered the basketball world are now being considered the newest emerging fashion icons.

Athletes and fashion moguls in one, who would have ever thought? One thing is for sure, David Stern will never have to worry about his athletes showing up on game day dressed under-par ever again. 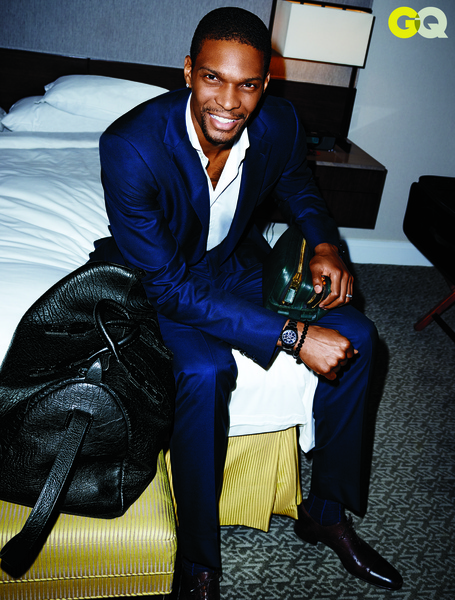