If you care to even consider that this could be a competitive series, than you will want to look at a couple of things the Milwaukee Bucks do well, and how Miami should be ready for it.

Share All sharing options for: First Round Series Preview: Three ways the Bucks can bother Miami

The Eastern Conference playoffs has some brutally unappealing and uninteresting matchups compared to the loaded Western Conference, and the battle between the defending champion Miami Heat, a No. 1 seed, and the Milwaukee Bucks, a No. 8 seed, doesn't figure to be very dramatic.

But if Milwaukee steals a home game in the series, hold off on wondering why. Behind Brandon Jennings' adorably delusional confidence is a team that made the playoffs, because, well, they do a few things well.

THE BUCKS TURN YOU OVER...AND THE BUCKS DON'T TURN IT OVER

The Bucks are tied for second in the NBA in opponent turnovers per game. For a pace-adjusted figure, they are sixth in the league in defensive turnover percentage, which tracks turnovers per 100 possessions.

Tied for seventh in the league in steals, the Bucks have a few players with active hands. Monta Ellis (2.1), Jennings (1.6), Marquis Daniels (0.9) and Ersan Ilyasova (0.9) are all candidates to get in the passing lane and take something from you. Larry Sanders and Luc Mbah A Moute are athletic bigs that can be disruptive as well.

Miami is terrific at taking care of the basketball, but it will be tested.

A few of these players, like Daniels, have solid anticipation and capitalize on mistakes, like this fumbled Mario Chalmers kick-out from a game earlier in the season.

Chalmers will begin the play with a dribble drive. 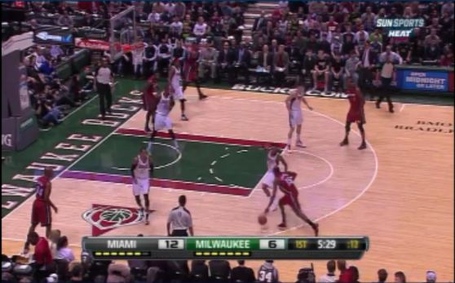 The fifth year guard uses a spin move to get to the middle of the floor and in front of the bucket. 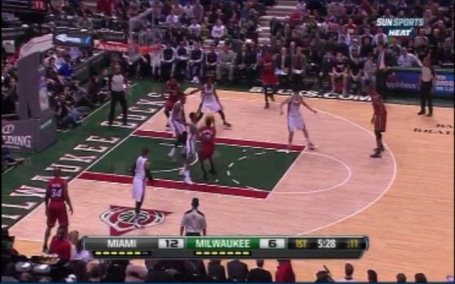 In his view, Udonis Haslem lurks on the right block for a potential bounce pass, but a kick-out to LeBron James behind the arc seems more logical, given that Daniels is slightly over-helping and packing the paint. Notice Ilyasova prepared to detonate a pass to Bosh on the right wing as well, were it to come.

Daniels will proceed to cover the ground necessary and pick the pass from Chalmers to LeBron. 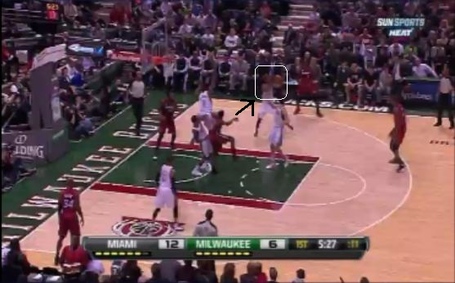 In addition to their pesky ways, the Bucks also take care of the ball quite well, with an elite offensive turnover percentage. The Bucks play at a fast pace and probably won't adjust too much from their style, given their lack of efficient players in the half court.

They are bound to lose this battle, because even if they can run with Miami, they won't be able to sustain the efficiency Miami has. But they can steal a game this way.

THE BUCKS CAN HIT THE OFFENSIVE GLASS

Also, don't count out some minutes from John Henson, who is a best candidate among obscure bench players in the league to pop off a 20-rebound game for no reason.

If Milwaukee can get some timely production in one other critical category, and keep the rebound margin in their favor, they have a recipe to steal a game on their home court.

THE BUCKS HAVE LARRY SANDERS AND YOU DON'T

Seriously, this guy is the best player on the Bucks. He's good for a double-double every night, but his best work comes on the defensive end. He's a terror protecting the rim, and he's just as good as Tyson Chandler or Kevin Garnett will be if Miami plays them later in the playoffs. Sanders is dealing with a back injury, but should be good to go.

Miami likes to isolate Dwyane Wade and James a good bit in the post, and Sanders is a threat to send some of these shots to the seats with his weakside presence.

The obvious antidote for the Heat is they hit the 3-pointer very frequently, and they can make Sanders more insignificant if they move the ball around and spread the Bucks out.

He is a load in the second line of Milwaukee's defense, but Miami's offense is probably too powerful for him to have any decisive impact.

But again, if a few things fall in line, including a big Sanders game, the Bucks can take a game, because things happen sometimes.

The Heat will win this series, but it's probably good to know what Milwaukee does anyway.