Milwaukee forward Luc Richard Mbah a Moute is known as a solid defender, and made a few good plays against the Heat superstar in Miami's game two win over the Bucks. But how effective was he at bothering LeBron James, who missed eight of 14 shots in the game?

You might not have noticed Luc Richard Mbah a Moute during the Heat's game one blowout of the Milwaukee Bucks to open the Eastern Conference quarterfinals on Sunday. LeBron scored 27 points on 11 shots, and it registered as another day at the office for the league's MVP.

But that doesn't mean Mbah a Moute wasn't there. Listed at 6-foot-8 and 230 pounds, Mbah a Moute is a long, young athlete who is considered a pretty good defender, but playing in Milwaukee, his name doesn't exactly ring bells.

You can bet LeBron knows who he is, though. And Heat fans know who he is after Miami's game two win as well. Mbah a Moute forced a few turnovers and made a few things seem difficult for LeBron, drawing some praise on the Heat's telecast. This isn't the first time this comes up either.

But before we let this information settle in, we're going to take a closer look to find out exactly how much of an impact Mbah a Moute had on James' pedestrian offensive performance, one in which he shot 6-of-14 from the field and, in scoring 19 points, snapped a streak of 22 consecutive playoff contests with at least 20 points.

I charted 10 plays in which Mbah a Moute defended James on possessions that ended with a score, a turnover or a foul. Here are the results:

Play One (9:15, 1st quarter) - Mbah a Moute forces a turnover with pressure on the left sideline, as LeBron dribbled it off his leg and out of bounds after Mbah a Moute perfectly denied an attempt by Udonis Haslem to free him with a screen.
Play Two (5:07, 1st quarter) - James gets an isolation lay-up in semi-transition on Mbah a Moute. He powered in and got Mbah a Moute off balance with a swift between the legs dribble. 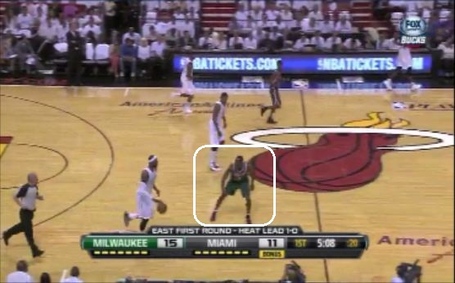 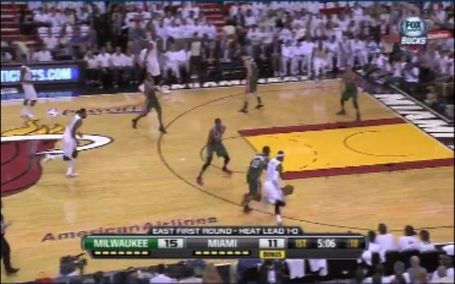 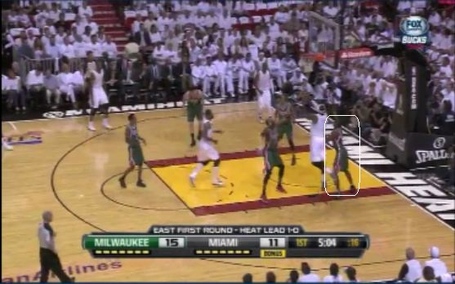 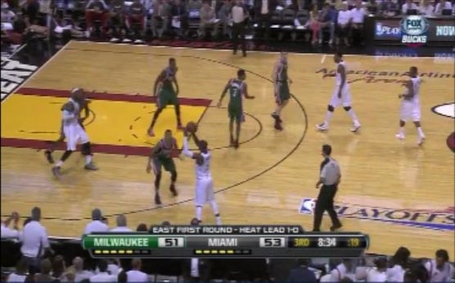 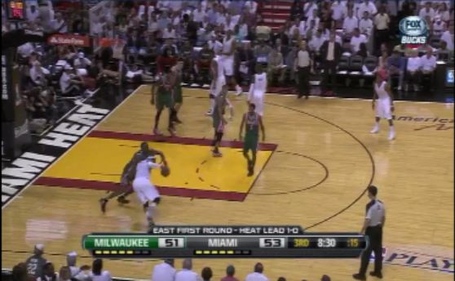 As LeBron makes a move toward the middle of the floor, Mbah a Moute doesn't give up any ground, and LeBron loses his balance trying to find space. 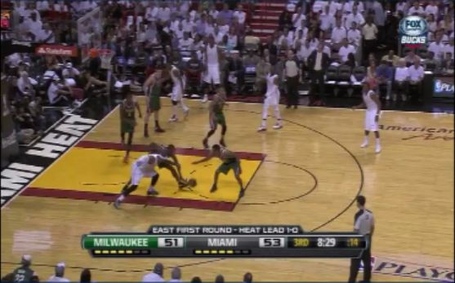 Mbah a Moute dislodges the ball and his team picks it up.
Play Seven (6:03, 3rd quarter ) - Again, Mbah a Moute loses LeBron on a pick-and-roll, as LeBron slips a screen and catches a pass from Mario Chalmers. Unfortunately, Sanders is there again to deter it and force a miss.
Play Eight (5:54, 3rd quarter) - James isolates Mbah a Moute on the left wing, but has to force a 3-pointer off a Udonis Haslem screen with the shot clock expiring after not reacting quicker.
Play Nine (4:10, 3rd quarter) - This play was interesting, and showed a level of respect the Heat have for Mbah a Moute. Shane Battier and Chris Bosh set staggered screens to free LeBron, which means they sent two consecutive screens. Mbah a Moute fought threw them and still stayed with the play after a solid help-and-recover sequence from Ersan Ilyasova. LeBron ultimately got a clean shot at the rim and missed a lay-up.
Play ten (0:05.7, 3rd quarter) - A LeBron isolation on Mbah a Moute becomes a screen-and-roll with Ray Allen, but LeBron makes an ill-advised turnover as Mike Dunleavy picks up a strongside steal. This had nothing to do with Mbah a Moute.

So now that we have the play's in front of us, let's separate the real impact plays. We'll grade the plays with a win for either LeBron or Mbah a Moute, depending on the type of shot LeBron got with Mbah a Moute as his primary defender, not depending solely on the result.

We can chalk up play's three and seven as plays in which the Bucks defended LeBron well as a team, moreso than stops from Mbah a Moute. On both of these plays, LeBron, at no fault of Mbah a Moute, gets steam going to the rim off a screen and Sanders fills the lane to deter his shots.

We can also erase play ten from our evaluation, because again, the Heat take Mbah a Moute out of the play with a screen, and the Bucks deter LeBron with their team defense, not with any individual play from Mbah a Moute.

I think play nine is tricky, because although Mbah aa Moute fought his way back into the play, he still was trailing just behind him when LeBron missed an easy layup. We'll go ahead and omit this one too.

This leaves us with six plays to go by. Out of these, LeBron wins three of them. He scores a few field goals at the rim with Mbah a Moute as his primary defender, and also drew a foul on him. The other three plays, however, saw Mbah a Mpoute force two turnovers and play a key role in a missed field goal.

What does this all tell us?

We'll, LeBron didn't struggle from the field because of Mbah a Moute's daunting presence. Keep in mind, throughout this game, by my count, LeBron also missed one shot with a heave at the end of a quarter. So, it's really 6-of-13 shooting. He also missed a put-back layup, a wide open floater and a spot-up corner 3-pointer.

This performance could have easily looked a lot better than the 6-of-14 that showed up on paper.

But this also tells us that, facing the incredible task of guarding LeBron James, Mbah a Moute might match up as well as anyone on this planet, because of his strength, activity and textbook defense.

They can only hope to bother him and disrupt his rhythm, and for a few plays tonight, they did so effectively.

With the series going back to Milwaukee, it will be interesting to see this matchup continue to unfold, as LeBron might not see a better individual defender in front of him for the rest of the season.