The Miami HEAT have announced a new project that includes all of HEAT Nation, from South Florida to anywhere else!

The Miami HEAT wants to include their fans, both near and far, in this year's playoff run. They came right out of the playoffs gate with the social media campaign called #WhiteHotHEATFan. Using this hashtag, fans are able to post a picture of themselves in their White Hot HEAT gear and tell where they're from, then their picture will show up on WhiteHotHEAT.com. 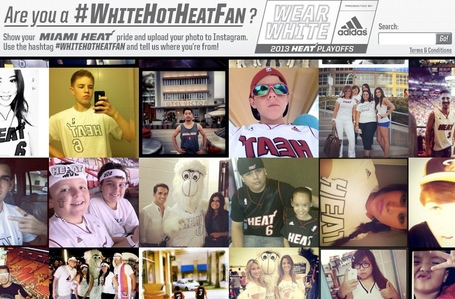 The Miami HEAT wants fans anywhere and everywhere to be a part of their new Project White Hot video. It will be "directed by you" the fan. Here's how it works. You tell HEAT TV host Jason Jackson why you're such a big HEAT fan and post it to YouTube, then tweet the YouTube link using the hashtag #ProjectWhiteHot. They want HEAT fans to be funny, creative, and of course, White Hot. Whether you're in Tampa, Boston, Philippines, Australia, China or even Westchester, this is your chance to show your HEAT love and to become almost famous!