The Sports Illustrated Sportsman of the Year got together with the SI SportsKids of the Year at the Miami Heat vs Philadelphia Sixers game at the American Airlines Arena.

Share All sharing options for: LeBron keeps promise to Cayden and Conner at Heat vs Sixers game

When LeBron James was honored as Sportsman of the Year in December 2012, he met and paid an emotional tribute to the 2012 SportsKids of the Year, Cayden and Conner Long. In fact, LeBron was so impressed with the two brothers (who were also honored at the event) that he promised to fly them to Miami to see a Miami Heat game and to meet the team. He kept that promise on Saturday night when the Heat played the Philadelphia 76ers at the American Airlines Arena.

The story of Conner and Cayden Long, also known as Team Long Brothers, gained national attention over the past year. The boys are from White House, Tennessee and they participate in triathalons, including the IronKids Triathalon, as a team. Cayden is 7 and has cerebral palsy but rather than being relegated to cheer on the sidelines in his wheelchair, his 9 year old brother Conner decided years ago to push, pull and tow Cayden in the events so that he, too, could participate. Conner would rather finish last together than finish first alone.

Following Sports Illustrated's presentation of their SportKids of the Year award, LeBron was presented with Sportsman of the Year. LeBron, however, was admittedly "at a loss for words."

LeBron said, "Conner and Cayden are the real Sportsmen of the Year." He went on to say, "What you do for your brother is unbelievable. I got two sons 8 and 5. They will be seeing that story. I don't have to preach anymore because, what you do, I can just show that and my older son will know what he should do for his younger brother." 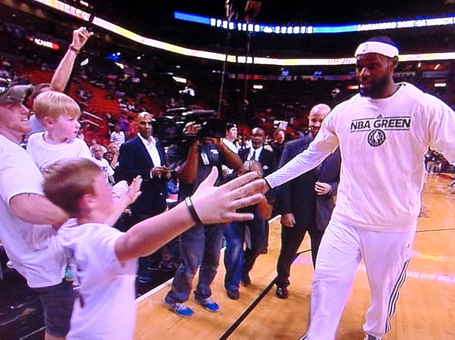 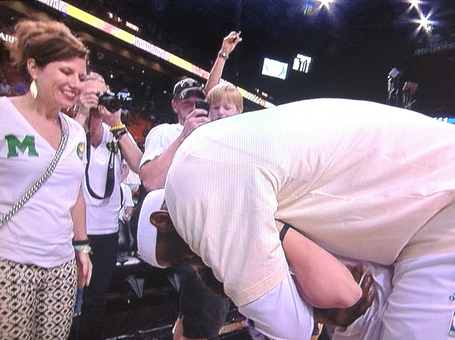 At one point, LeBron said, "You guys are definitely coming down to Miami to see a game - to meet our team." Saturday night before tip-off, the family met up again with LeBron on the court and LeBron greeted Conner with a huge bear hug. During a 2nd quarter interview with Jason Jackson, Conner showed that he had already learned the requisite cheer, "Let's go Heat!" 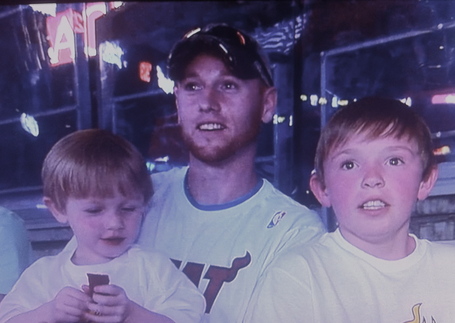 Cayden, Conner and their parents were all wearing Heat shirts. And yes, Conner was wearing LeBrons on his feet. But most impressive, as always, his heart.