Miami HEAT fans are getting hooked up with the best giveaways in the NBA thanks to the creative vision of local marketing company See Ya PR.

Look around the South Florida area this time of the year and you'll find their numerous products on someone's head, arm or even in their car that shows to everyone that they're rooting on the Miami HEAT during their title defense in the 2013 NBA Playoffs.

For the second playoffs in a row, local creative agency See Ya PR has been working closely with the Heat to provide fans with awesome White Hot HEAT themed giveaways. But their influence goes much further than the now-iconic shades that Chris Bosh and the rest of his teammates were proudly wearing after securing the franchise's second NBA Championship. I talked with CEO Nathalie Maass about the growing company and how their work with the best team in the NBA has boosted fan spirit and given the team's supporters plenty to cheer about, or better yet, to cheer with.

We are an agency that manufactures merchandise by creating virtually anything our client's requests or needs are.

2) How did you come about working with the Miami Heat?

Working with the Heat has been quite a journey, a very spirited and notable one to say the least. Our relationship with the Miami Heat started last season (2011-12) when we created our first "Miami Floridians" themed shades for them. As it got closer to the 2012 NBA Playoffs, we conducted several meetings with Heat representatives to discuss options to create a unique giveaway for the White Hot playoffs. It was clear to us that it was a priority for them to really show appreciation for their fans.

We really wanted to do something that would be the talk of the town, so we knew that in order to make the "White Hot" giveaway a true success we would have to be extremely creative and make something that fans actually want to keep and use. In collaboration with the Heat's marketing department, we came up with an idea to make a drawstring backpack filled with White Hot HEAT themed merchandise including See Ya shades, tattoo sticker s, a magnet, car decal,  Jelly Watch, key chain, car air freshener  and more.

The fan kits immediately were a HUGE success. We've received remarkable feedback and reactions from all over the world. It is an indescribable feeling to see someone wearing your creations. We attended the road rallys during the playoffs and we saw how people were screaming, cheering and jumping for a chance to receive one of the bags. The Miami Heat showed that they will go to the extreme for its fans. I don't think any other NBA team did anything close to this giveaway. 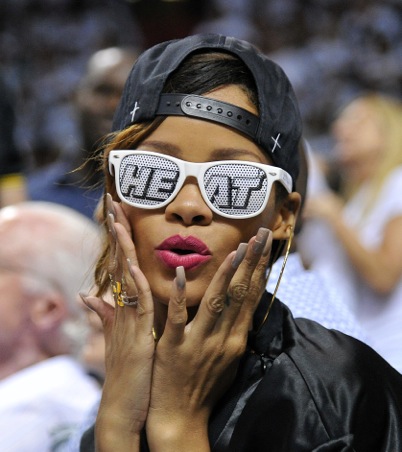 3) Video and pictures of the Heat players and staff wearing SeeYa's Heat Shades helped define the spirit of the celebration. Describe how it helped your company's exposure and how was the reaction?

In general, having the Heat as one of our major clients is a great honor and we feel blessed for having the opportunity to work with the team during the Playoffs and Finals, especially with all the hate and criticism after losing the championship the season before. This is also an opportunity for us to thank them. We have met with so many people that work there and are very dedicated to the team and they really love what they do.

As the HEAT progressed to the Finals we received a lot of exposure, the local news, ESPN, NBA.com, major websites etc. The Huffington Post chose our See Ya shades as the #1 most essential Heat gear, and our fan kit won an award for the "Swag Bag of the Year" and "Best Giveaway."

The most important and rewarding feedback is from the fans and the HEAT staff. We received an email from one of the Miami Heat executives saying - "I gave 10 kits to the workers @ my Waffle House this morning and you would think I was Elvis passing out $100 bills!"

4) What were the logistics of the celebration? How many shades were ordered and were there special variations on the design that were ordered?

For the 2012 NBA Finals we made three designs for sale and giveaway. The quantity was quite significant and they quickly sold out regardless. Besides the large quantity orders we also created Burnie's glasses, Bananaman shades, Heat dancers, Extreme Team shades as well creating customized glasses for DJ Irie, (Heat arena host) Dale, (Heat announcer) Michael Baiamonte and many others.

The gear created for the Finals game celebration and the Championship Parade was very spontaneous, it literally was a last minute decision. Just a few hours before the final game vs the OKC Thunder we secretly gave Adrianne Bosh 10 pairs of "CHAMPS" glasses to use just in case the Heat won the game. Sure enough, we saw Chris Bosh wearing our Champs glasses and it was all over every media outlet in the world. It was the perfect symbol for the ending of this amazing season. They were under so much scrutiny that the "CHAMPS" glasses together with Chris Bosh's saying - "I'm a champ, read my face" was a great finale.

The championship parade glasses were given to the players and their family, and everybody loved them, even the Larry O'Brien trophy had them on.

Unfortunately, people out there are trying to take advantage of the situation and they sell the "CHAMPS" glasses as an "original piece of history". We want to make sure people know that whatever they buy online is FAKE. We didn't create the glasses for profit, as it was a genuine symbol of appreciation to the Heat players.

5) Will you be working with the Heat on any future projects?

For the past two regular seasons, we've also been working with the Miami Heat Store and we have designed alternate versions of the See Ya shades, Jelly Watches, silicone bands and sweatbands/headbands for retail and they have consistently been top 3 sellers.

This postseason, the White Hot HEAT fan kits have once again been a huge success and we're continuing to work with the Heat and sponsors to deliver even more cool giveaways at the AA Arena and at Heat events around the community.

6) What other local clients have you worked with recently? Do you work with only exclusive clientele or can anyone make special requests for their event?

One of our biggest clients in Miami is the Ultra Music Festival. This was the second year we manufactured most of the merchandise for the festival's 15th year anniversary. Our clientele varies from big companies such as Warner Bros. Records to other sports teams like the Thunder as well to individuals.

We appreciate all of our clients no matter how small or big their orders are. Anyone can request items, we make it happen!

For more info, check out SeeYaPR.com that's soon to be relaunched and also includes all of our social media links.