After struggling mightily earlier in the series, Dwyane Wade made purposeful actions when he received the ball to help Miami close out the Chicago Bulls.

Unlike Games 3 and 4 of the Miami Heat's series against the Chicago Bulls, Dwyane Wade acted decisively when he had the ball in his hands in Game 5. He made three clutch baskets last night -- two floaters and a put-back dunk -- and looked much better than he had since Game 2 of the Heat's first round series. Let's look more specifically at what Wade did last night. 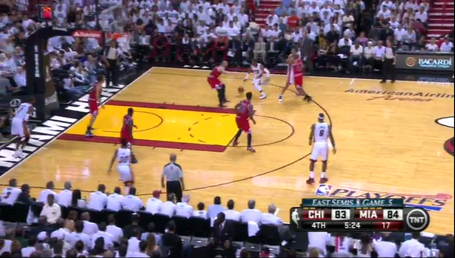 This is a picture from Wade's first fourth-quarter floater. Shane Battier sets a great screen on Rip Hamilton, enabling Wade to attack Carlos Boozer. But the 6-foot-8 power forward can't defend the 6-foot-4 shooting guard on the run and ends up backpedaling too much. Wade is thus able to get a clean look at the basket for a floater to put the Heat up three points. This two-time NBA champion has made this move a myriad of times, but it certainly was encouraging to see him act decisively and exploit his match-up with Boozer as soon as Battier gave him the screen. In Chicago, Wade was indecisive and looked as if he was unsure of what to do after he saw help defense. That's part of the reason why he committed four turnovers in Game 3. In contrast, Wade only had one turnover in 37 minutes of action last night. 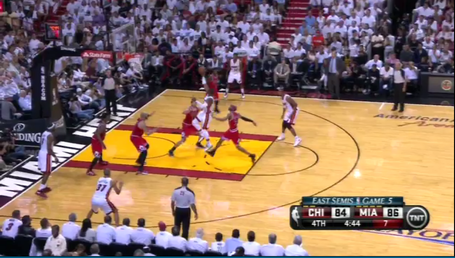 Here is a picture from Wade's basket on Miami's subsequent possession. Wade gets a clean look at the basket again, but did not use a screen. Wade received the ball at the top of the 3-point line, and Bosh takes a step toward Wade as if to set a pick. Hamilton takes a step toward Bosh, anticipating the screen, but Wade bursts in the other direction. Joakim Noah doesn't fully commit to helping over to Wade -- surely because Bosh would have a wide-open jumper then -- so Wade doesn't have to get the shot up over Noah's outstretched arm. Wade's swift move to get a step on Hamilton provides options on this play, as any other good Heat play does. For example, Boozer leaves Shane Battier in the corner to help on Wade. Forceful penetration from Wade can really open the floor for Miami's shooters, and that was missing from Miami's offense in Chicago.

Heat fans are asking now whether Wade will continue to provide this forceful action in the conference finals. The 2006 NBA Finals MVP said that he felt better last night than he had in a while. Whatever treatment Wade received before -- and during -- Game 5 enabled him to simply play more comfortably with the ball in his hands. Moreover, it's important to note that Wade's performance was by no means stellar. He played very well down the stretch on both ends of the floor, had six assists and shot an efficient 7-of-13 from the floor. But Hamilton also blocked a layup attempt from him on a fast-break.

The Heat won't even need a fully healthy Wade to repeat. Miami defeated a Thunder team with Russell Westbrook and James Harden last year while Wade played at about 75 percent. If he can simply play at least to the level he played at last night, Miami should be fine. Wade's first basket early in the first quarter came on a cut he made to the basket after Mario Chalmers penetrated into the paint. If he can penetrate, cut and work out of the post efficiently on offense and compete defensively, the Heat should end up victorious once again.