A comprehensive preview of the Eastern Conference Finals

From Roy Hibbert's defense to David West's ability in the post, Miami has a lot to prepare for. But so do the Pacers. Let's take a look at some of the key tactical elements to keep an eye on in this series.

Share All sharing options for: A comprehensive preview of the Eastern Conference Finals

Once we are done sensationalizing the comments of Indiana Pacers coach Frank Vogel, we can proceed to talk about the actual basketball to be played in the Eastern Conference Finals.

Ready? Good. What we have is a series that is sure to challenge both teams more than they have been challenged this postseason, and from an entertainment standpoint, it's cool that there seems to be some authentic friction between the two.

The Miami Heat lost two of three games to the Pacers in the regular season, but the Heat defeated Indiana in the Eastern Conference Semi-Finals last postseason.

Here are some of the main factors to keep an eye on.

ROY HIBBERT, CHRIS BOSH, AND THE BATTLE FOR SPACE

The Heat have went through Larry Sanders and Joakim Noah so far this postseason, and in Hibbert, Miami faces another rim protecting monster. But the good news is the Heat have the perfect antidote for Hibbert's desire to deter anything close to the rim: Chris Bosh.

Hibbert is a load to deal with. Indiana's defense features sharp rotations, and Hibbert can be a disruptive presence for Miami's wings, who live at the rim.

Let's look at some cuts from the Heat's Jan. 8 loss at Indiana to see how Bosh and Hibbert interact in the game.

In one snapshot, here is an example of the types of shots Bosh will get all series. On this play, Mario Chalmers cuts backdoor on the right wing, drawing a step from Hibbert, who will never be too far out. Bosh drains it. 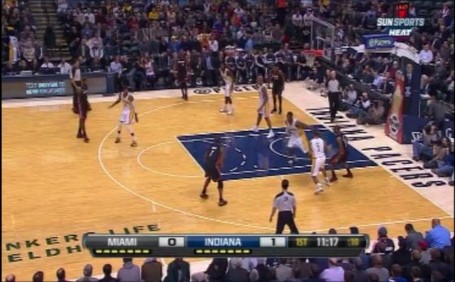 In the next play, we see Hibbert active in his duties as the Pacer center. LeBron James has the ball above the arc to begin the play, which evolves into a cross screen for a Dwyane Wade post-up on the right block. 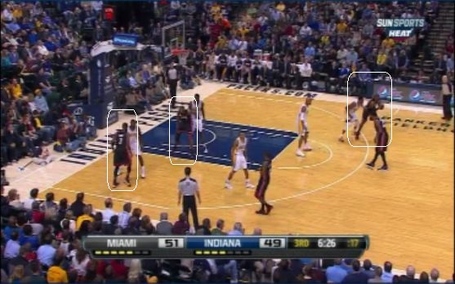 After Bosh screens for Wade to receive the post entry pass, this is what we see. In the weird shape like thing in the picture, we see Hibbert and Bosh. Things are very simple for the Pacer defense at this point. Wade will post up, and Hibbert is in position to swat the ball into the stands with George Hill ready to drop down and help on Bosh if anything happens. 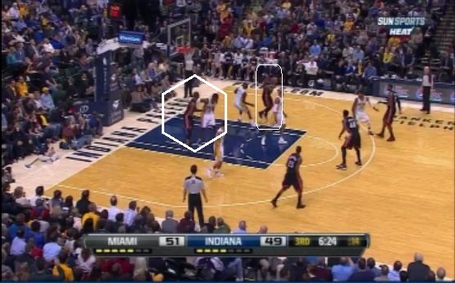 But not so fast. Bosh slips outside to the corner, and Hibbert stays in the paint to help on Wade. He's not necessarily making the wrong decision, but he's picking his poison. David West, overlapping Hibbert in the picture, is now responsible for closing out on Bosh when Wade makes the right play and passes out. 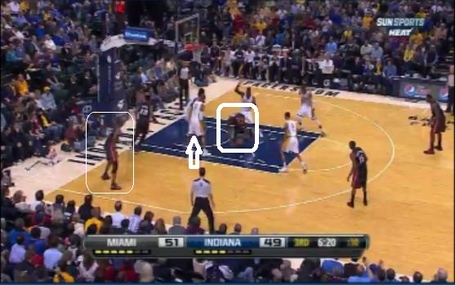 But it's too late. This is a splash. No need to cite the percentages, Bosh is one of the best mid-range shooters in the world, and for a big man, he's off the charts. 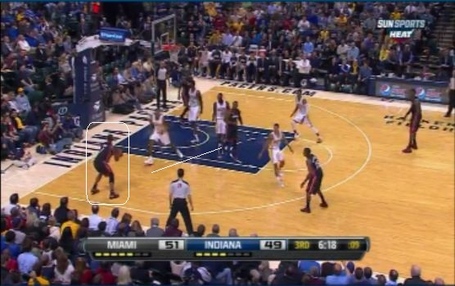 These days, this long 2-pointer might be a corner 3-pointer, so Indiana could end up with more headaches here. Bosh is shooting 3-pointers liberally this postseason, and is 7-of-15 from beyond the arc through two rounds.

In this case, I don't see any possible adjustment for Indiana to make. Hibbert is a great defender, but he probably can't consistently stick with Bosh on the dribble-drive, and he's better suited to stay close to the rim to deter Wade and James plays inside.

Indiana will have to just hope Bosh isn't consistently knocking these down.

THE THREAT OF DAVID WEST

It's interesting that Paul George gets a lot of credit for budding into a really good player, and is spoken of as the player team's need to prepare for. I think the player Miami most needs to prepare for on this series is actually power forward David West.

George is a lot of things. He's a great defensive player who can rebound, create for others, and knock down shots. But he's not an efficient offensive player. George shot 42 percent from the field in the regular season and his true shooting percentage of 53.1 isn't exactly sparkling. He's not going to consistently manufacture efficient offense for himself.

In three games against he Heat this season, George scored 54 points on 49 shots. West, on the other hand, scored 68 points on 38 shots and averaged 23 points against Miami this season. Small sample size, but it's rational to think that West is a better scoring threat against Miami than George.

How should the Heat deal with West?

Miami is sure to front the post to try to stall entry passes to him. Fronting is the process of putting the entire body out in front of the offensive player to prevent the pass from coming in. It has its advantages and disadvantages, but the Heat figure their defense is fast enough to help on passes over the top, with the added bonus that it can spark some turnovers.

Shane Battier and Udonis Haslem should do a good job with this, but it's going to take timely rotations and a lot of work.

For those who see George as the must-stop threat, I think the Heat should attempt to put Wade on him for stretches and allow James to guard West as a chance of pace. Wade can capably defend George, although the taller wing could theoretically shoot over him.

Either way, Miami will have to deal with West, who is a tough post player that can cause Miami's interior defense issues.

Indiana is really good at this rebounding thing. They were sixth in the league in defensive rebound percentage in the regular season and fourth in offensive rebound percentage. This will get harped on a lot, especially when people talk, tweet and overreact to raw rebound margin, which doesn't exactly tell the story of the battle on the glass like possession-adjusted percentages do.

But Miami should be concerned with cornering other factes, like turnover percentage, and finding efficient offense against a really stingy Pacer defense.

Miami is sure to get outrebounded this series, but it won't decide the outcome if Miami plays to it's identity.

Miami is going to have to shoot the basketball well in the series to win, which obviously is entirely possible with the talent they have, but it's nonetheless a fact. Indiana not only does a great job of taking away the paint, but their way of defending pick-and-rolls, with their center (Notably Hibbert) sinking into the lane, tends to invite pull-up 2-point jumpers.

With a lumbering big like Hibbert, this makes sense. No need to have him slowly hedging screens out on the perimeter and getting dusted on the recovery.

Here are some examples, courtesy of the internet.
To beat this, Miami needs to be patient, not take the bait and pull-up too much on these screens, and move the basketball to get those great perimeter looks they thrive off of. The pick-and-roll probably won't be a big part of the Heat's offense in this series, even though pick-and-roll ball handlers were used on 14 percent of the Heat's possession in the regular season (per Synergy Sports Data.)

Spot ups will be relied upon more than ever.

I predict the Heat will win this series in six games, just like last season, because although Indiana has improved, Chris Bosh will be active, unlike the matchup last postseason, and the Heat have improved quite a bit themselves. The perception of improvement is looked at closer when a bad teams becomes good or a good team becomes great, but Miami going from great to greater is substantial as well.

We should be in for a fun time.