Plenty of news to report this morning while you wait for tonight's Game 2 of the Miami Heat vs Indiana Pacers.

SB Nation's Drew Garrison is showing some love for the Birdman after arguably his best game in a Miami Heat uniform, and a timely one at that, with a nice piece today on his Game 1 performance. The player formerly known as Chris Andersen was a perfect 7-7 from the field and Garrison expands on how Birdman was so brutally efficient.

Andersen was key in the Heat's Game 1 victory. In a tight game against one of the best defenses in the league, Andersen made all seven of his shots and played his role to perfection.

In other news, the Heat announced a partnership with international recording artist Pitbull on a special 2013 NBA Playoff "remix" of his latest single.

"Feel This Moment" has been given a special White Hot HEAT-themed version and Pitbull personally re-wrote and remixed the song specifically for the 2013 White Hot HEAT Playoffs.

"Pitbull is one of Miami's native sons and we're thrilled at the chance to collaborate with him on this creative project," said Eric Woolworth, President of The HEAT Group's Business Operations. "HEAT fans are clearly going to ‘feel the moment' as well as the love when they hear the song and watch the video."

The music video for the song debuted during Game 1 of the Eastern Conference Finals between the Heat and the Indiana Pacers.

The good folks over at Carroll's Sports Cove are releasing a limited edition LeBron James bobble head doll that looks to be simply awesome and worthy of any true Heat fan's collection. 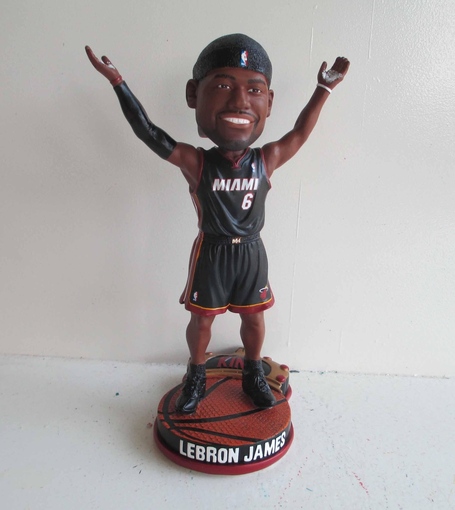 The Lebron James "The King Series Figure #1" Chalk Toss Bobble Head Doll #/144 Carroll's Sports Cove Exclusive is strictly limited to just 144 individually numbered pieces. It's the first figure of their new exclusive "King Series" bobbles with more coming soon. The bobble stands 8 inches tall and is on a base referencing him as "The King" while doing his signature chalk toss pose. You can pre-order it right here.

Finally, the Heat have announced the official road rally for games 3 and 4 of the Eastern Conference Finals will be held inside the AmericanAirlines Arena. Tickets are free but you must register at HEAT.com beginning today (Friday, May 24) at 2:00 PM and pay a $2.00 convenience charge per ticket. There is an eight ticket maximum per person. HEAT fans can already pick up tickets at the Arena Box Office too.

Parking will be available in the Arena's P2 parking garage for $5.00 per car and will be available on a first come, first served basis while supplies last. Select concession stands as well as The Miami HEAT Store will be open for business. For more information, fans can log onto www.WhiteHotHEAT.com.

A special pre-sale opportunity will allow American Express card members to register for their tickets before the general public tomorrow from 10:00 a.m. to 2:00 p.m. In addition, card members who register their tickets using an American Express card will have access to special VIP seating, pre-game photos with the 2012 Championship trophy outside of Section 114, a gift with purchase at The Miami HEAT Store, specially priced food and beverage combo meals and the opportunity to take a post-game free throw on the HEAT hardwood.