Fans at the first AmericanAirlines Arena Road Rally of the Eastern Conference Finals show love and appreciation for the Miami HEAT. There's no question, they deserve this team.

The Road Rallies at the arena are a very special outreach to the community from the Miami HEAT and the American Airlines Arena. The arena opens up its parking garage for fans to come into the arena and watch the television broadcast of away games on the scoreboard's big screen TV. There is no fee for admission. (You do need a ticket and there is a $2 service fee from Ticketmaster.) Most of the food concessions are open as is the HEAT Store. Burnie and Banana Man are there along with the Extreme Team, the Miami HEAT Dancers and Uptown Dale. It's just like being at a HEAT game but without the players in the house.

The beauty of it is, fans who don't usually get to sit down low (or even come at all) are there with their families and friends, cheering, screaming, singing to Seven Nation Army (this season's fight song) and catching shirts from the many t-shirt tosses. Last night, Uptown Dale hosted a shooting contest and a fan named Fernando won $100! Kristen Hewitt from Fox Sun Sports hosted a Trivia Contest and winners took home a t-shirt touting HEAT Broadcaster, Jason Jackson's, Ascot Friday. Jason Jackson himself made his way up into the stands and took many, many pictures with his enthusiastic fans. 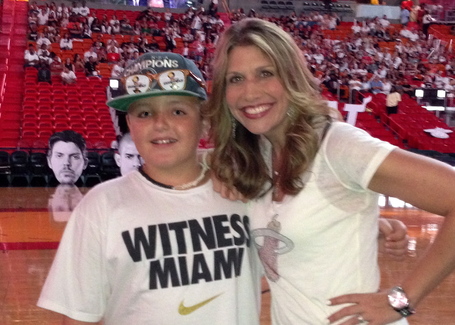 However, the crowd last night wasn't big at all. Road Rallies in the past have been filled up into the second level. Surely we'll get there in the coming games (it's Memorial Day Weekend after all) but the energy in the arena matched any crowd during the regular season, possibly in the post season, too. These people weren't there because it's the cool place to be or because of connections at work. These fans were just fired up about Game 3 of the Eastern Conference Finals and wanted to be together, as one, feeding off of each others enthusiasm in the home of their team.

And when that small crowd of enthusiastic fans left the building, they filled the echoing parking garage with loud horns honking and screams of joy while chanting repetitively, "Let's Go HEAT."

A resounding reply to critics: Don't question our fandom.