Spoelstra's strategy to get LeBron James the ball in the post and send all his other players to the other side of the court allowed the four-time MVP to exploit the slender Paul George.

At one point during Miami's 2011-12 championship run, Erik Spoelstra told LeBron James, "We need you to play like a big man. Forget everything you know; you're a 4 now." In Miami's second-round match-up with the Indiana Pacers last spring, James played as an extremely effective nominal power forward with Chris Bosh out. And last night, it wasn't Miami's 3-point shooting that proved vital to the Heat's dominant win over the Pacers. In fact, Miami scored an incredible 70 points in the first half of Game 3 while only making three 3-pointers. It was James punishing the slender Paul George in the post time and again.

Now, this assertion isn't meant to discount Miami's shooting. James attempted his first shot more than six minutes into last night's game. Chris Bosh and Udonis Haslem combined for 18 points in the first quarter alone, and all of their field goals were jumpers with the exception of one Haslem hook shot. But James' work in the post was another vital element to Miami's offense and a key reason why Miami scored 52 points in the paint last night. The Pacers' combination of Roy Hibbert and David West allowed Indiana to become the paint power team in the first two games of the Eastern Conference Finals. But Miami turned the tables on Indiana last night. Let's look at a few plays James used to score. 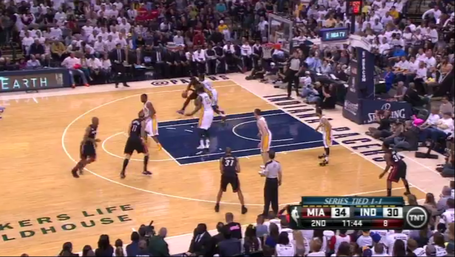 Miami uses the first play of the second quarter to get James a post-up opportunity. As one can see, all other Heat players have gone to the other side of the floor to clear the lane for the game's best player. Hibbert tentatively cheats off Chris Andersen to offer help, but that doesn't work. After backing George down, James spins away from Hibbert's help defense and makes a bank shot with his left hand. The same thing happens on James' next basket, as the Heat again load up the weak side to offer James a whole side of the court to himself. Just like the previous possession, James spins away from the help defender to score with his left hand. A screenshot of the four-time MVP's next field goal is below. 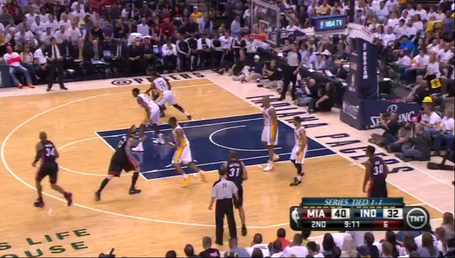 The next basket from James comes due to a different set-up. Chris Bosh sets up shop at the 3-point line, and Haslem actually serves as the player who throws a nice entry pass to James. West and Hibbert are therefore too far away from the basket to offer help for George, who is again guarding James. James begins to act like he wants to receive a conventional post pass but turns his body the other way to confuse George and get an open lane to the basket. James receives the entry pass with deep position in the post, and the first help defender is point guard George Hill. The 6-foot-8 James easily scores over Hill for a layup. 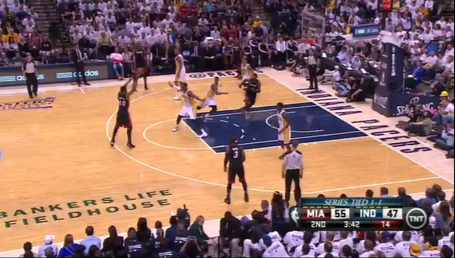 Spoelstra repeatedly called for James to get the ball in the post with the rest of the team on the other side of the court. After last night's performance, it's abundantly clear that George cannot defend James on his own down low. Now, Frank Vogel has a dilemma. If he begins to send extra help on James in the post, Miami will only receive more open 3-pointers. Oklahoma City's Scott Brooks tried that during last year's Finals, and James easily made cross-court passes to open shooters like Shane Battier, Mike Miller and Mario Chalmers. Is Vogel willing to bet that Ray Allen and other Heat shooters will miss wide-open shots? Although Miami didn't win this game with the long-distance shooting, perhaps this power paint game the Heat established in Game 3 will open the floodgates for the team's offense to break out later in the series.