Miami didn't lose game one of the Eastern Conference semi-finals because of the last few possessions, but they certainly didn't help. Let's relive the mess.

Share All sharing options for: A closer look at Miami's late game offense

But none of that was on display late in game one loss against Chicago. It's a small sample, and I expect Miami to adjust come game two, but Chicago is too good defensively to come at them with basic late game plays where you allow their defense to be set and comfortable.

With 1:18 left in the game and Miami trailing by two points, the Heat never scored again, in large part because they weren't more creative out of timeouts.

Play one begins with Mario Chalmers passing the ball in from out of bounds. The Heat closed with a Chalmers, Ray Allen, Dwyane Wade, LeBron James and Chris Bosh 'small' lineup. 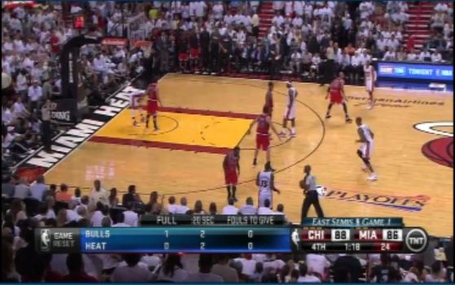 Wade, who is under the basket in the first image, is going to use a high down screen from James to get free at the top of the arc. James falls but quickly gets back up. 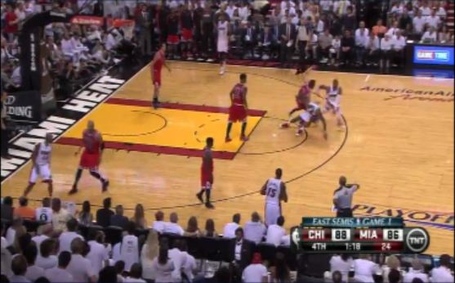 Miami then proceeds to run a 2-4 pick-and-roll with Wade and James, which is not at all a bad idea. The Bulls, however, wisely switch on the attack, and Wade actually ends up in a worse position that he would have been had he just isolated on Marco Belinelli.

Another thing to note here. Miami has often run pick-and-rolls this season with secondary action in the background to distract defenses. In this sequence, Miami loads the corners, but Mario Chalmers essentially is standing there watching on the left wing. This clogs up the area, but also allows Chicago to completely focus on stopping the screen-and-roll. 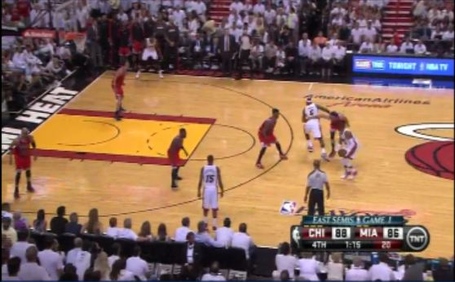 And then we get this terrible shot to look at. According to Vorped, Wade shot 5-of-17 on straight away, above the arc 3-pointers this season. I would imagine that this pull up shot with Jimmy butler's hand in your face is not a good shot for Dwyane. Miami had to get more here, especially considering their head coach has been very good with plays out of timeouts before. 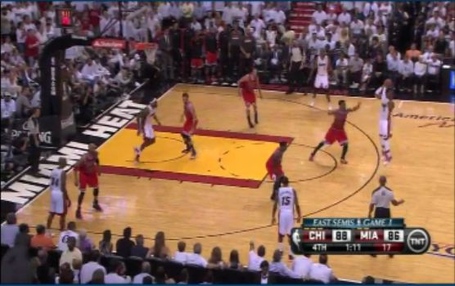 Nate Robinson made another (!) huge bucket on the other end, but Miami was still within reach with 46 seconds left and down four points. With another out-of-bounds play coming out of a timeout, I'm bracing for what Erik Spoelstra drew up. 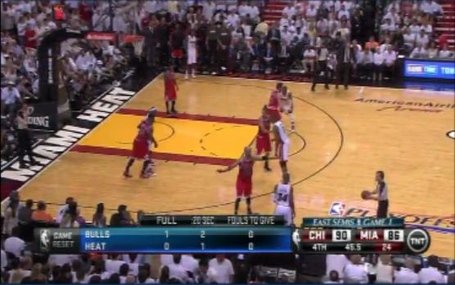 As soon as Allen inbounds to Chris Bosh, it seems Miami was looking for James to seal Butler on the left block for an over the top pass. It seems like a bit of a difficult pass for Bosh to make though. And nobody else is moving. 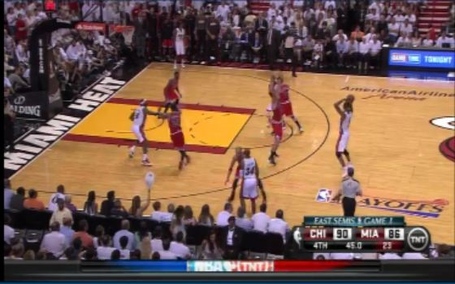 The initial look fails, and after a quick pass to Wade above the arc, James comes all the way up to get the ball. And look at where he gets it. 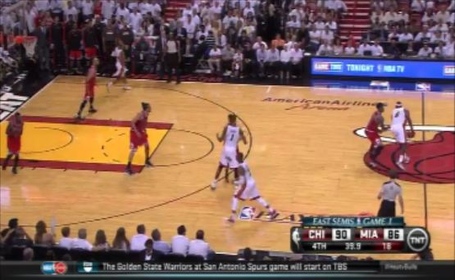 With 18 seconds left, you can already see that Miami is about to have to work really hard for a bucket here. LeBron has that ball way to far out, and he's about to have no help. Lebron then dribbles five seconds off the clock, and his teammates haven't made any decisive moves off the ball. At this point, we're looking at another isolation play.

Look, a LeBron James isolation isn't a bad play, all things considered. But when you let a defense like Chicago's, even without Luol Deng, get set and locked in like this, it's going to be a challenge. 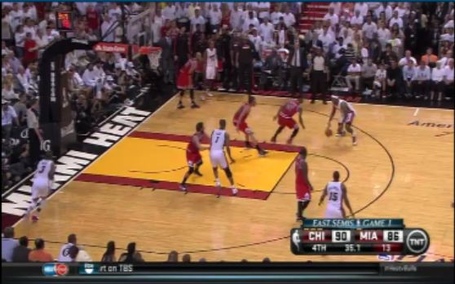 Wade is going to alertly try a baseline cut, but Chicago's defense sinks enough to take it out of LeBron's view, and we end up with this awkward floater, which was an airball. That's game. 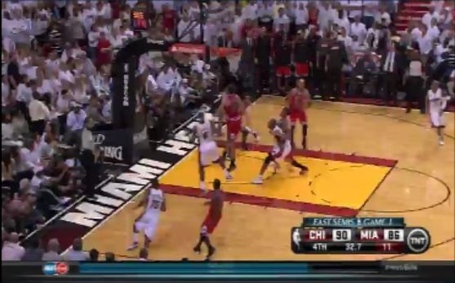 Miami jacked up a few 3-pointers after this, but barring something heroic, the game was done.

Remember, the Heat did not lose because of these plays alone. They missed a lot of shots early in the game that they normally would make. But the game was still well within reach, and among other adjustments, Miami will have to examine how they can get more efficient late game offense if they are in this position against he Bulls later in the series.

Heat fade during crunch time, lose 93-86 in Game 1 against Bulls