Anatomy of a run: How the Heat ran away from the Bulls

The Miami Heat's dominant 43-18 run over the second and third quarters included shots from beyond the arc and at the rim -- the same shots Miami missed in Game 1.

Share All sharing options for: Anatomy of a run: How the Heat ran away from the Bulls

When the prognosticators discuss the Miami Heat's 37-point win over the Chicago Bulls last night, they'll say why they think the Heat won. They'll talk about how the Heat didn't back down from Chicago's physical play, how LeBron James played more aggressively to start the game and how Miami defended Nate Robinson. Some of these explanations are more useful than others, but they all miss the point. The Heat blew out the Bulls because it simply made the high-quality shots it missed in Game 1 -- 3-pointers and shots at the rim.

The Heat's decisive stand came during a 15-minute, 30-second stretch over the second and third quarters in which Miami outscored Chicago 43-18. Let's look at what types of shots Miami received, beginning with Norris Cole's first 3. 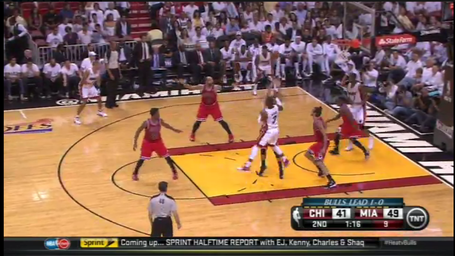 Look at how the Bulls defense converges on Dwyane Wade when he posts up Marco Belinelli; all five Bulls players are looking at him. Wade then proceeds to find Cole in the corner for a 3-pointer that gives Miami its first double-digit lead. The Heat's offense created these same open looks in Game 1 -- Shane Battier missed three wide-open 3s in the first quarter of Monday's game -- but the Heat shot 9-of-18 from beyond the arc instead of 7-for-24. Cole knocked down another 3 on Miami's ensuing possession. During a semi-transition sequence, no player picked up Cole and he found himself open in the corner again. 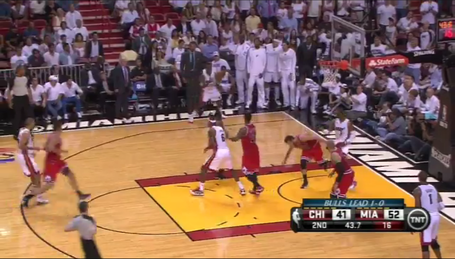 In the third quarter, Miami's offense provided several shot opportunities at the rim -- like the 3-pointer, a highly efficient shot. Look at this play from Dwyane Wade. 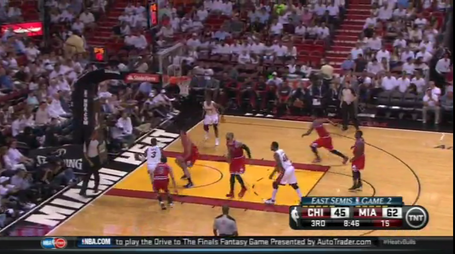 Once again, the Bulls defense collapses on Wade. This time, Wade took Belinelli off the dribble instead of posting him up, though. As Joakim Noah comes over to help, Bosh also gets closer to the basket but finds the proper place so Wade has the right angle for a pass. The 2006 NBA Finals MVP drops off a soft bounce pass for Bosh, who dunks the ball to give Miami a 19-point lead. Some of Miami's at-the-rim shots in this game came as the product of brilliant passes from LeBron James -- like Wade's reverse layup midway through the third. But others came as the result of simple, effective basketball execution. Let's look at one more play, when Bosh gets an easy layup as the pick-and-roll man. 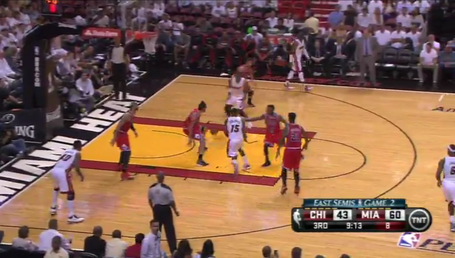 After setting a screen for Mario Chalmers, Bosh dives to the basket and finds an opening after Noah switches onto Chalmers. Bosh shot only 3-for-10 from the field in Game 1, but he had a particularly effective third quarter last night. He struggled in the first half, but it was certainly encouraging to see him get many opportunities at the rim.

Sixty-seven percent of Miami's field goal attempts in Game 2 either came at the rim or from 3-point land. In Game 1, it was 65 percent. The Heat's offensive execution in the last three minutes of Game 1 was undoubtedly inadequate, but for the most part Miami executed well. Those shots simply went down last night, and the result was a resounding victory.