LeBron James has done it sparingly before, but he was used as a screener on a lot of pick-and-rolls in the Heat's game two win in the NBA Finals, and it had good results. The more surprising thing is that Mario Chalmers was the beneficiary of such screens.

LeBron James the screener has slowly become a small part of the Miami Heat's offense the last few season's. In 2012-13, James was used as a screener on roughly five percent on Miami's possessions as opposed to 2011-12, when James was involved in such action only 2.5 percent of the time.

The Heat have made the effort to use it more, but the results haven't exactly cried for it.

There are certain splits that make it look favorable, but overall, James shot just 8-for-33 during the 2012-13 regular season as a pick-and-roll screen man, according to Synergy Sports Data. The year before? He made just 7-of-20 baskets in this situation.

It's a small sample, however, and may not account for James' improvement in an area that is new to him. In addition to acquiring a set of post-up skills, James has added other facets to his game, and among them is using his wide shoulders to set solid screens. It seems new to him at times, but other times he looks like a natural.

In game two of the NBA Finals on June. 9, James partnered up with point guard Mario Chalmers to devastate the San Antonio Spurs defense. James, usually a wing that handles the basketball in pick-and-rolls, creates a different challenge for a defense as a screener.

For one, team's have to be aware of leaving him open to help off of screens, because, well, he's the best player on earth. In theory, LeBron should be explosive slipping to the rim in these sets, and could be a real threat to pop out and shoot. It's a matchup nightmare, even though the results haven't indicated that the more Miami has used it.

Here are the results of the plays in game two involving James or James and Chalmers. Seven of the ten pick-and-rolls LeBron was a part of were for Chalmers. Chalmers was 3-of-5 from the field in these situations, and James was 1-of-2 (With his only miss being a blown lay-up).

Play One: Second quarter (5:38): A deep Side pick-and-roll with Mario Chalmers doesn't initially go anywhere, but Chalmers gets a lay-up off the dribble after a pick-and-roll fake in which Kawhi Leonard didn't want to help off of LeBron.

Play Two: Second quarter (4:25): LeBron sets a side pick-and-roll for Ray Allen and Leonard sinks into the lane as you would normally expect. Allen drills the jumper though.

Play Five: Third quarter (3:22): Green switches onto Chalmers on a side pick-and-roll and Neal recovers, leaving LeBron to crash the glass after Chalmers blew the layup. Lebron got fouled. 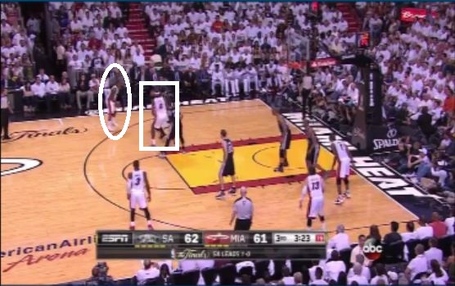 The Heat mostly went with side pick-and-rolls on the night, perhaps with the intention of creating space by posting up shooters on the weakside of the floor. On this screen, Chalmers goes left to the rim, drawing the switch and Gary Neal struggles to recover. 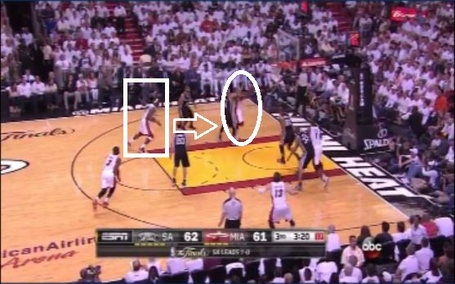 This leaves LeBron with an open lane to crash the glass, as the Spurs defense is rotating to either box out or contest Chalmers at he rim. 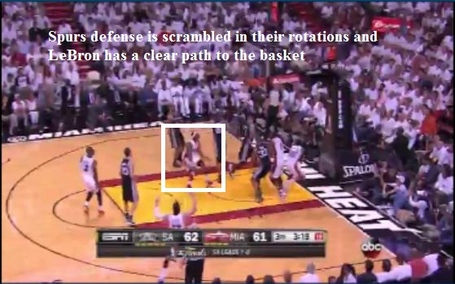 LeBron gets fouled after nabbing the offensive board.

Play Six: Third quarter (3:13): LeBron high pick-and-roll sets up Chalmers to attack Danny Green again. He finishes with the foul over Green despite Neal rushing back.

Play Seven: Third quarter (1:54): LeBron Chalmers side pick-and-roll gets LeBron slipping to the bucket for two points on a layup.

Play Nine: Fourth quarter (11:20): LeBron pick-and-roll for Mario just inside the top of the key but Mario misses an open 2-point jumper.

Play 10: Fourth quarter (9:48): What was initially a LeBron post-up becomes a deep side pick-and-roll. Mario gets to the bucket and finishes again over Leonard.

It was a good night at the office for Chalmers, who scored 19 points on 6-of-12 shooting on the night to lead Miami. The Kansas product has shown the ability to be a streaky scorer in spurts, and it always a pressure release valve when he can create off the dribble and give James and Wade a break.

Chalmers was in attack mode all night, and had an unusual amount of plays run for him. If anything, you would have expected Dwyane Wade to be the primary option in the pick-and-roll with Lebron, but Wade played just 30 minutes in the game, and his health is still clearly a factor.