After a disappointing loss in the playoffs the season prior, Wade would look to end the Heat's misfortune and bring them back to the top. In this contract season, Miami wondered if this would be Wade's last year in a Heat uniform if another early loss were to occur.

Following the 2008-2009 season, Dwyane Wade encountered his contract year. After this season he was able to become a free agent and many wondered if he would stay in South Beach or venture back home to Chicago. The were little to no expectations for the Miami Heat having come off a disappointing first round exit versus Chicago the season prior. All eyes were on LeBron James, and while he still had a significant following Wade was regarded almost as an afterthought when one discussed the offseason. I personally believe this didn't go unheard to Dwyane who subsequently delivered one of his greatest seasons.

A handful of roster moves were set during the offseason of 2009, and while one would think they were being placed to support Dwyane Wade it almost seemed as if these new bodies were more of a security blanket in case Wade decided to opt out and leave town. Carlos Arroyo started at point guard with Wade and Quentin Richardson manning the wings while Michael Beasley and Jermaine O'neal took on the inside responsibilities. Although a solid starting five, this team seemed frail when compared to other contenders in the East. Nevertheless, Erik Spoelstra improved the Heat's record another year as they finished 3rd in the Southeast with a 47-35 record, four more wins then the previous season. Unsurprisingly, Wade was incredible throughout. He would go on to post a dazzling stat line of 26.6 points, 4.8 rebounds, and 6.4 assists per contest. Wade was very much Miami's star attraction, and while the wins weren't as frequent his highlights were. Wade frequently posterized defenders with fury that season (that Anderson Varejao dunk comes to mind), it appeared as if he was finally at full form once again after previously battling a plethora of injuries in seasons past.

Wade only missed four games that season, and did his best Michael Jordan impression of carrying the workload by his lonesome. In games he could be seen frequently slashing to basket with anger, as well as doing his best to get his team of veterans involved. It was enough to earn him his sixth All-Star selection as well as another trip to the post season.

Up until that point Miami had been on fire, and were out to upset a weakened Boston Celtics team caught in a slump leading into the playoffs. For a while it seemed as if it could happen, but despite Wade's incredible performance (3.2 points and 6.8 assists per game) Miami would eventually topple and lose the series in five games. Once again a first round exit shut off the lights in the AmericanAirlines Arena early, and left Wade in anguish. It was common knowledge that questions would surround him that off-season, and he didn't know what to do. Was this his final attempt in Miami? Was Wade County about to be evicted? 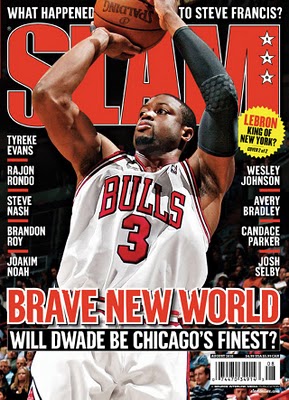 No one but Wade officially knew, and many could tell he missed the essence victory. After winning a gold medal in Beijing, Wade had tasted a sort of victory less than two years prior, but wondered if he needed to be elsewhere to experience it back in the NBA. NBA enthusiasts and critics alike considered the Chicago Bulls to be Wade's obvious choice, but he had a different plan, one that would become infamous just a few months later in the form of a "decision".