Derrick Rose will mark his return to the NBA in a visit to the Miami Heat on ring night, Oct. 29.

The NBA released its complete game and broadcast schedule for this season today, and the Miami Heat will begin its title defense Oct. 29 at 8 p.m. against Derrick Rose and the Chicago Bulls on TNT. Rose, who sat out the entire 2012-13 season, recently said that he is the best basketball player in the NBA. The Heat players, coaches and executives will receive their rings before tipoff.

Miami plays the next night in Philadelphia before visiting the retooled Brooklyn Nets Nov. 1 at 8 p.m. on ESPN. Miami will face the Nets Jan. 16 at the O2 Arena in London. The Heat play 11 of its first 18 games at home, and will visit the Los Angeles Lakers Dec. 25 at 5 p.m. The last time the defending NBA champion played on the road Christmas day was in 2008, when the Boston Celtics visited the Lakers. But this year's decision appears a little strange, with the loss of Dwight Howard and Kobe Bryant's injury making some question the Lakers' ability to compete for a title this year. Miami has gone 5-1 against the Lakers in the Big Three era. 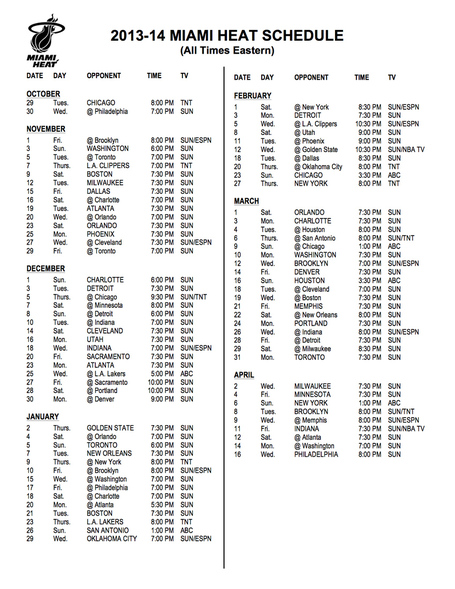