So, we got excited about basketball again. Instead of just waiting for the game, we decided to link up with GSoM to swap off five questions in preparation for tonight's contest.

Andy Liu of the always excellent SB Nation Golden State Warrior's blog, Golden State Of Mind, had a chance to trade off a few Q's and A's with us.

Kevin Kraczkowski, Hot Hot Hoops: Tell me something, anything about Golden State's rookie class, featuring Nemanja Nedovic, Ognjen Kuzmic, and Dewayne Dedmon (I haven't ever heard of any of them). 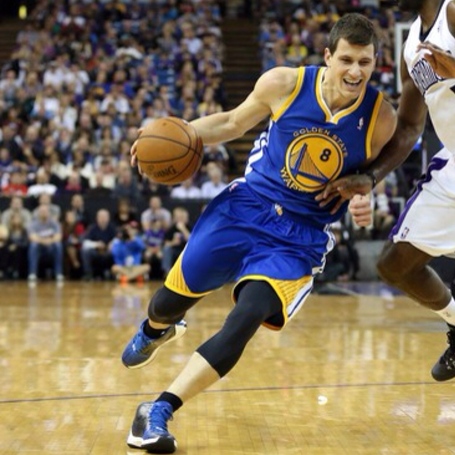 Andy Liu, Golden State of Mind: That there's not much to tell about any of them in a short-term sense. Nemanja Nedovic's nickname is the European Derrick Rose and he's playing about as well as Rose is at this moment. Ognjen Kuzmic just recovered from a wrist injury and there's a need for a backup big man with Jermaine O'Neal out for a while. Dewayne Dedmon is toiling in the D-League and is a non-prospect right now.

KK: How important have new-ish Warriors additions Andrew Bogut and Andre Igoudala been to Golden State's on court success?

AL: Ridiculously important. By far the two best defenders on the team and some of the best in the league, the Warriors have fallen apart without one or the other in there. The Warriors struggled to a 5-7 record without Iguodala but are 15-6 with both talents in the lineup. More worrisome is the depth behind Bogut. Coach Mark Jackson has replaced Bogut with Draymond Green in the lineup to add offense and hopefully retain some type of defense but it would appear David Lee should be the odd man out here. The interior defense is a sieve without the starting, and healthy, big man.

KK: Before last year, Golden State had made the postseason in one of their previous 18 seasons. Is the core finally in place to keep them in contention for the forseeable future - and how far do you see them going this season?

AL: The core with Stephen Curry, Andrew Bogut and Andre Iguodala are set to stay together for the next half-decade.

As long as they keep the trio together, and healthy, Bob Myers should do a decent enough job to keep the Warriors competitive - he's been a success so far. As for this year, it wouldn't surprise anyone if the Warriors lost in the first round or advanced to the Finals. This year's version is better than last year's but it's up to Jackson to incorporate the pieces (stagnant offense, actually playing Kent Bazemore real minutes, some strategic oddities - no spread offense with excellent shooters) and he's been up-and-down to this point.

KK: I could make a case for Stephen Curry and maybe Klay Thompson for this season's all-star roster. Is there anyone else who in your opinion also deserves consideration?

Bogut's BIG game leads Warriors to next round! (via NBA)

AL: No. Iguodala's been great on both sides of the ball (defense closing down the perimeter shooting and giving secondary defenders like Thompson and Harrison Barnes less overall responsibilty; on offense shooting a career high three-point percentage). However, he's been hurt a while and has struggled offensively since coming back nursing a hamstring strain. Bogut's been a revelation for a team always absent a rim defender but with the position-less All-Star structure, it doesn't make sense to add him. While Curry and Thompson make waves on highlight reels it's the two complementary pieces that keep the proverbial engine rolling.

KK: If there is one glaring deficiency in Golden State's game, it's in their propensity to give up the ball. They currently rank last in the NBA, turning the ball over 17 times per game. Miami leads the league with 18.5 takeaways per contest. Have the Warriors gotten any better recently at controlling possession - or are you in for a long night?

AL: Regression to the mean is the most-used phrase in basketball, or close to it, and there's a sliver of truth to that, but this team is without an above-average ballhandler outside of Stephen Curry.

Curry himself is averaging a career-high turnover percentage but that's what happens when high minutes meets high usage. Iguodala and Toney Douglas have both missed time and should solve some problems. Still, Barnes, Green, Thompson and the big men are mostly unable to create their own shots, putting the onus on Curry and Iguodala. It'll be interesting to see how Miami's high-risk-and-reward defense works against the Warriors. Even though there are a deficiency of dribblers, Bogut, Green and Lee are excellent passers.

Thanks to Andy Liu for his insight into the Warriors. For my answers to his questions, click here. Check back here later for the GameThread, going live at 6:30 PM.

Warriors unstoppable on offense, shoot down Miami Heat with 123-114 win