President Obama welcomes back the Miami HEAT as NBA Champions with jokes, recognition and more jokes. He goes on to hint at a karaoke battle at Shane Battier's Battioke fundraiser.

Well, he's a self proclaimed Chicago Bulls fan but when the President spoke at the White House during the Miami HEAT's visit on Tuesday, he definitely sounded like a fan.  This was the HEAT's second annual trip to the White House being that they are back to back NBA Champions. It's a tradition for the best teams and rumor has it LeBron and Savannah have subleased the Lincoln Bedroom in order to simplify their annual visits. (Knock on wood.)

This year, the President had jokes! Now I'm sure the President has amazing speech writers who did plenty of research to hone in on small details so Obama could make off the cuff comments and quips. However, I prefer to believe President Obama is capable of stopping the world so that he can watch every game, especially the Playoffs.

President Obama spoke about the team's accomplishments over the past two years and then said, "Sometimes it feels like they're still fighting for a little respect. I can relate that."  He went on to talk about the 27-game win streak, then said that it was "almost as impressive as the Bulls 72-win season."  He also recognized the team's HEAT Home Strong initiative that honors our troops at the starts of all home games when they return home.

When he brought up Shane Battier's annual karaoke fundraiser called "Battioke," he warned, "Just leave Al Green to the pros, people." Judging by this clip, he was talking about himself:

(Get that man to the Filmore, Shane!)

President Obama took time to speak to each player on the team, every coach, all the front office executives and even the wives and girlfriends. When he said hello to Gabrielle Union, she said via Instagram, "Our President asked me about #BeingMaryJane!!!" She told him it would be on later that night at 10pm. (Now that's a plug, BET!)

As Obama wrapped up he suggested they take a group photo but said, "I think we should make it quick before one of these guys starts yelling at Mario [Chalmers.]"  He went on to say, "I mean, sometimes it's just a bad pass, guys. It's not Mario's fault."  Then he told Chalmers, "I got your back, man."

Think about that. The President of the United States of America has Mario Chalmers' back!

There were many fancy, fun photos being posted on Instagram and Twitter throughout the day, but one of the most touching had to be a picture of Dwyane Wade and LeBron James sitting together on a small, colonial sofa. Wade wrote, "White House flow with my bro @KingJames. We took a moment to sit and talk about how far we have come." 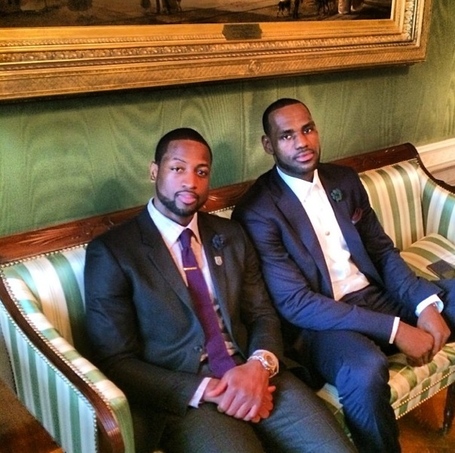 It was a moment no one could take from them. Not the Pacers. Not the Spurs. Not the haters. And HEAT Nation was proud. 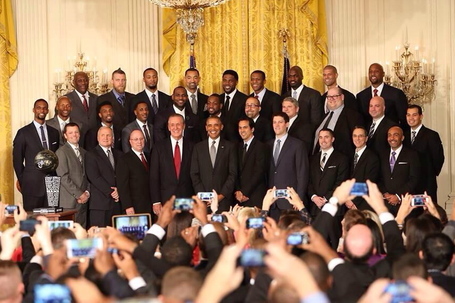 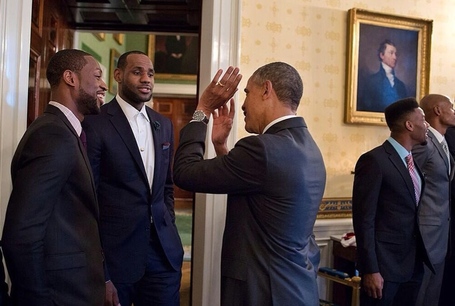 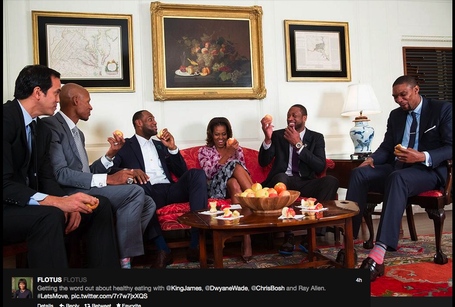