Is it time to unload Udonis?

After 10 seasons of grit and dedication, the Miami Heat might be willing to part ways with the hometown hero

Share All sharing options for: Is it time to unload Udonis?

The Miami Heat is clearly struggling and, if a change can preserve their hopes for a third consecutive championship, some are suggesting Udonis Haslem is the likeliest candidate.

To long-time Heat fans, the thought of trading the glue that has held the team together for over 10 seasons is preposterous.

But outside that vacuum of blind loyalty, experts believe that trading away Haslem's salary and eroding skillset might be the key to success, both this season and beyond.

Here are two reasons for and two reasons against moving the veteran heart and soul of the Miami Heat.

U.D. Just Does not Produce

Since joining Miami in 2003, Haslem has never been a superstar. He has quietly led by example, a key to success that can't always be measured statistically. But as he produces less and less, his role - whether quantifiable or not - clearly becomes more obsolete.

Udonis had been capable of providing a supporting spark during his tenure, both offensively and defensively. As either a starter or a backup, his career statistics show an amazing consistency. With the exception of the 2011-12 season, his field goal percentage barely wavered from nearly 46% (in '03-'04, his rookie season) to a high of 54% (in '04-05 and with new-and-determined teammate Shaquille O'Neal, a player that historically improved field goal percentages by commanding double- and triple-teams).

In fact, his per-game totals have dropped in nearly every major category, including points (2.8), rebounds (2.9) and even free-throw shooting (nearly 56%, over 12 points lower than his previous career low). It should be noted that Udonis has been battling a bad back and recovering from off-season surgery for a torn knee ligament. Throughout his career, Haslem has been a steady-but-limited offensive player. But he's been largely ineffective from nearly-every spot on the court this season, as seen below. 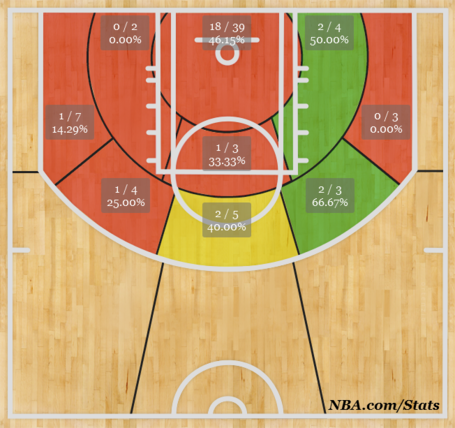 The dependable jump shot is no longer falling. The rare drive to the hoop can't be finished strongly at the rim. Perhaps more telling is the fact that he has been held out of 13 (of 41) games this season due to coach's decision.

If the Heat staff has lost faith in Haslem's ability to produce, he no longer deserves a spot on this roster.

Any Weakness Will Be Exploited

That judgment might seem harsh, particularly for a wounded warrior who made physical, financial and statistical sacrifices for the sake of the team. But last season's playoffs showed that the gap between the league's championship contenders has narrowed and there is no room for error.

Miami's greatest challengers - the Indiana Pacers, Oklahoma City Thunder and San Antonio Spurs - have a common factor aside from losing to the Heat over the past three seasons.

They've grown as frenzied as sharks to ravenously exploit any weakness in the NBA's leading predator.

And with every missed jumpshot, Udonis is only throwing more chum in the water.

Haslem's limited offense allows an opposing player to lag away from his defensive assignment, creating mismatches and forcing Miami's more gifted offensive players (basically everyone on the roster) to fight through constant double-teams.

In less than eight months, highlights like these have become a virtual impossibility.

And if it's true that Haslem has already given everything he had to Miami - the proverbial blood, sweat and tears - what would the rest of him be worth? Despite barely playing or producing, his contract is valued at a significant amount.

This year's salary is $4.34 million. With a trade clause worth 15%, the actual worth is closer to $5. Next season's salary ($4.62 million) is a player option, one you can you bet the aging Haslem with take.

Any trade for Haslem's remaining salary (a bargain for the still-productive player when he re-signed with Miami in 2010), would likely have to include other players under contract, or a third team that might be convinced that Haslem can still be a key contributor to a title chase.

In an ideal world where the remaining 29 NBA teams would be desperate to alleviate Miami's salary cap concerns, the possibilities would be endless.

In reality, there are very few and these all seem unrealistic.

For the sake of argument, assume a team is willing to make a straight-up trade for Udonis. What players of comparable worth are available and, moreover, could be a factor in Miami's championship pursuit?

With the removal of Haslem's offensive liabilities, the Heat's most glaring weaknesses are on the defensive end (guarding the three-point line) and rebounding.

Perimeter defenders that are of similar contractual value to Udonis include Minnesota's Corey Brewer, Memphis' Tony Allen and the Clippers' Jared Dudley.

These players represent an upgrade over Miami's current perimeter players, Shane Battier, Rashard Lewis and the erratic Michael Beasley. Enough of an upgrade to end this trade speculation immediately.

Big men in the same $5 million range include the Pacers' Luis Scola, Denver's Timofey Mozgov and Sacramento's DeMarcus Cousins. These are more interesting options worth pursuing. But Scola was just signed by Indiana specifically to challenge the Heat. Mozgov, only 27, will never be dominant but he still has an upside and Denver will not just give his productivity away. Cousins, as talented as he is troubled, can still mature as a person and as a player. But he's already playing at a near-All-Star level so the Kings are not desperate to unload him.

It seems like Haslem can't, or won't, be moved. And while there has always been reason to believe Heat President Pat Riley can pull off the spectacular, the miraculous seems beyond even his abilities.

Removing the Heart Will Kill the Body

But what if Riley could make the move happen? Would it be worth it? Last week, Riley pulled the trigger on a three-team trade that sent defensive stalwart Joel Anthony to the Boston Celtics. That move proves Riley's willingness to make changes, no matter how ruthless or disheartening they may seem.

Anthony, known as "Doc" by his teammates, was a solid NBA citizen, a great presence in the locker room and, like Haslem, willing to do the little things that help teams succeed.

Following the trade, the visibly-shaken Heat played against the Washington Wizards and proceeded to get blown out of the building. As LeBron James said after the game, "It's tough to see a brother go."

And Dwyane Wade, despite witnessing multiple roster shakeups in his career, called the trade "unfortunate" and added, "You realize at that moment that it could be anybody. The business of it really shows its face. You feel sorry for the guy who has to go through it."

How much harder would it be for Wade, as experienced and hardened a player as there is, to suffer the loss of Haslem, a man he has called "my brother"? When Haslem was a free agent in 2010 and mulling significant offers from Denver, the Dallas Mavericks as well as other suitors, it was Wade who asked new superstar teammates James and Chris Bosh to sacrifice some of their salaries to re-sign one of his best friends and the lone holdover from Miami's 2006 championship season.

And they both did, without even a second thought.

Haslem re-signed, accepting less money to stay in Miami. Where he grew up, and won accolades as part of a star-studded Miami Senior High basketball team.

To stay in his hometown, where he learned how to be tough and determined from the mean streets of Overtown, even as he vowed to never let those streets keep him down.

Trading Haslem might, in fact, be a rational decision, one that could benefit a team built on cold-blooded analytics.

But removing Haslem, even declining in skills as he is, would have a devastating effect on the Miami Heat.

It would be more like losing a limb. Or like cutting out the very heart of a family.

*Statistic and salary information provided by NBA.com, Basketball-Reference.com, and ESPN