5 Questions with Pounding the Rock about Heat-Spurs

I caught up with SBN Pounding the Rock regarding Heat-Spurs. A familiar foe from the 2013 NBA Finals, what does Sunday have in store for us?

Share All sharing options for: 5 Questions with Pounding the Rock about Heat-Spurs

It was half a year ago, but the sting of a Game 7 NBA Finals defeat still sticks with the San Antonio Spurs. As as the Miami Heat prepare to host the Spurs for the first time since being crowned champions, I caught up with SB Nation's Pounding the Rock and asked 5 questions regarding the match-up.

MP: Not to bring up old history, but Ray Allen's Game 6 three-pointer must have been really hard to take as a fan. Has the team moved on from their Finals defeat, and/or is it motivating them to get back?

CS: I'm not sure Ray Allen's Game 6 three-pointer is something you can really ever get over. They had the tape around the court, the boxes of Championship gear were ready to unpack, and the beat writers were already filling in their Finals MVP ballots. Losing when victory was practically tangible goes beyond heartbreak. It leaves a lasting mark. I think that's what most writers were envisioning when the season started. How does an old team - particularly one that's unaccustomed to defeat in the Finals - respond to a loss like that? The answer is "quiet well, actually." I do think it's affected the team, but more as a motivation. They know they have the talent to get back there, and nobody's panicking this season about regular season games. The eyes, as always, are on the prize. 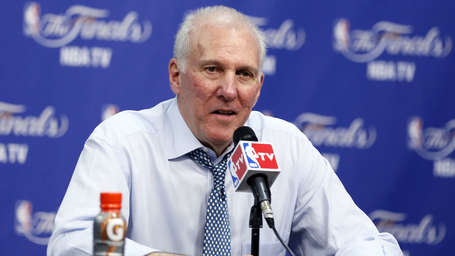 "Uh, it'll be a horrible memory walking in that gym. If I said anything different, I'd be the biggest liar that ever lived. How could I say, 'Yeah, no problem. Well, it was a tough night.' That's (expletive). We all know that. "So the truth is that it will be horrible walking in there. I'll think about it right off the bat, but it won't be any different than what I think about every day. At some point during the day, it goes through my head. I've said it a lot of times. My hope is that over time I'll think about it every two days, and then every week and then every month and then that kind of thing."

We've known the Tim Duncan, Tony Parker, Manu Ginobili trio for so long, how much longer can that group keep the Spurs near the top of the West?

The Spurs' Big Three, on their own, could only keep the Spurs near the top of the West for maybe another season. I know every year is the year where the window closes, but even if the team has managed to hold back "Father Time," the reality is age gets to everybody. That Big Three is getting older, and although Manu Ginobili and Tim Duncan are still very effective this late in their careers, eventually the minutes restrictions and production declines will necessitate finding players who can pick up the slack. The Spurs' "Little Three" (Kawhi Leonard, Danny Green, Tiago Splitter) can backup up Tony Parker, who is significantly younger than Manu and Tim, but eventually they'll need another piece to stay near the top of the West.

We know San Antonio will get 1-2 All-Stars. Who do you think is the most deserving on the Spurs?

Tony Parker is the Spur who most deserves an All-Star appearance. He's had a quieter first half to the season than most expected, but after a summer of international ball, he's likely been saving some for the second half of the season and the playoffs. In any case, he's the most vital piece of the Spurs' offensive engine, and the Thunder game on Wednesday showed that he's capable of producing big numbers in big games. He's one of the best point guards in the NBA and plays for one of its best teams. It's kind of a no-brainer. Tim Duncan will likely get a nod as well, though his spot on the All-Star team would be more controversial, as much a nod to his legacy as it would be to his output this season.

How will Kawhi Leonard being out for an extended amount of time effect how the Spurs will play?

With Kawhi Leonard out, the Spurs will be without three of their four best defenders for the next few weeks. Not a great scenario for a team that has been trying to regain its defensive efficiency. I'd expect them to struggle to get stops with Marco Belinelli and some combination of Nando De Colo/Cory Joseph/Othyus Jeffers taking the wing defender minutes. The team will probably get back Splitter and Green soon, but losing Leonard for a month is particularly tough. He was just starting to regain his three-point shooting stroke after a rough start to the season, and his steals and rebounds are a big part of the Spurs' defense. For the next month or so, they're really going to miss his gigantic mitts.

How will the Spurs give the Heat the most trouble on Sunday and what do you think will be the outcome?

The Spurs will do what they can to limit their own turnovers and make smart plays. That doesn't sound too difficult, of course, but against a smart, athletic team like the Heat it might as well be rocket science. In the Finals, the Spurs matched the Heat with an offensive attack that turned on a dime, every player in the right spot, every pass at the right moment. It was the peak of their execution, and that was with a healthy squad. If the Heat are at full capacity on Sunday, I don't think there's any chance the Spurs walk away with a win. I know Boris Diaw's girth can occasionally befuddle his opponents, but he can't guard Lebron James for a full game, and with Danny Green and Kawhi Leonard out, who will the Spurs turn to for stops? Last season's Miami Heat vs. San Antonio Scrubs match ("Restgate"?) turned out to be pretty entertaining. With Parker, Ginobili, and Duncan all playing on Sunday, I'm hoping for something close to that, an inevitable loss that somehow turns out to be exciting. (That, or Lebron going for 50+ points.)