The Miami Heat (27-8) are looking to start off their six game East road trip right as they face the New York Knicks (12-22).

The New York Knicks are looking for their first 3-game winning streak of the season, and if they want to do it, they'll need to beat the defending 2-time champion Miami Heat. Although at home, the Knicks are only 5-12 at Madison Square Garden this season, while the Heat are 11-5 outside of Miami.

This is the first match-up this season between the Heat and Knicks. Last year, the Knicks were the second seed in the Eastern Conference. Right now, the Knicks sit at 11th in the East. With injuries to Tyson Chandler and other key contributors, along with just poor play, New York's first team finds themselves in a battle just to get into the playoff mix.

Dwyane Wade and LeBron James have had plenty of battles with Carmelo Anthony in the past, and it seems that Melo usually saves some of his best for the Heat, and that shouldn't be any different for tonight. Anthony is averaging 26.3 PPG this season. 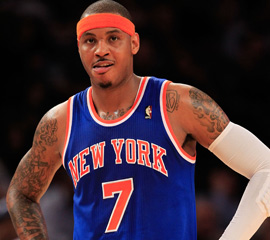 The Heat have always had trouble against Tyson Chandler. He's one of the reasons the Heat couldn't pull off the 2011 NBA Finals because of Chandler's rebounding dominance with the Dallas Mavericks. Chandler plays big and Chris Bosh will need to match that for Miami to be competitive on the boards. Chandler missed the last game due to an upper respiratory infection, he is uncertain for tonight.

The Heat may find themselves again without the services of Shane Battier (quad) and Mario Chalmers (achilles) who are nursing some minor injuries. But on the bright side, Dwyane Wade played 3 games in 4 nights, looked good, and anticipates to play tonight.

The Knicks have made some news lately, due to JR Smith's in game tactics. Smith was fined $50k for attempting to untie an opposing player's shoe at the foul line, after being warned when he did this to Shawn Marion earlier this week. Coach Mike Woodson was not happy with Smith. Since this incident, Smith has been rumored in trade talks, but honestly, who is looking to add JR Smith to their roster?

Tonight will come down to this: New York on national television against the #1 enemy in the NBA, the Knicks will bring it. Do the Heat muster up enough care and energy to not be too slow-started and lazy as they face a bottom-feeder in the East as they start a long road trip. Miami is better than the Knicks, but the Heat have also found themselves enjoying coming from behind against lesser opponents.

I think the Heat can dominate tonight if they are on their toes defensively. If so, relegating the Knicks to 11 games under .500 should be enjoyable for any Heat fan.

The Heat and Knicks are primetime television tonight, with the Oklahoma City Thunder visiting the Denver Nuggets on after them. You can see the game on TNT.

Check back at Hot Hot Hoops an hour before tip-off for the GameThread and chat live with us about what's happening.

posted by Kevin Kraczkowski about 1 hour ago