The Great Mount Rushmore Debate. No topic can be further analyzed, discussed, dismissed and largely misinterpreted as this little nugget. It rears its (four) ugly heads once again, courtesy of LeBron James’ yet-to-air interview with NBA TV. We look at which four faces will be carved in the Miami Heat’s tribute to greatness – will King James even be one of them? 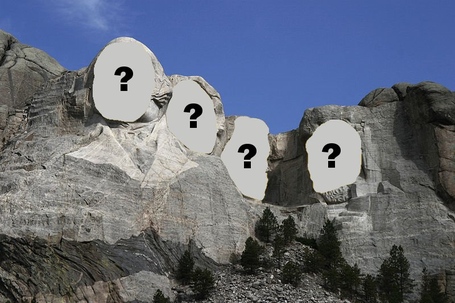 In an interview with NBA TV analyst Steve Smith that will air on Monday at 9 p.m., LeBron James was asked to name his personal Mount Rushmore, the four greatest NBA players of all time. His answer stirred debate across the basketball universe, and SB Nation has asked each team's blog to tackle the question.

James claimed that, eventually, he should be considered a part of the NBA's greatest tribute. As he rightfully told Smith:

I'm going to be one of the top four that's ever played this game, that's for sure. And if they don't want me to have one of those top four spots, they'd better find another spot on that mountain. Somebody's gotta get bumped, but that's not for me to decide. That's for the architects.

In context of the Heat, LeBron's inclusion is not a foregone conclusion. The debate was limited to the four greatest players but the original Mount Rushmore - you know, the real one - was a tribute to the four presidents who played the most important roles in the history of America.

With the true spirit of the monument in mind, here are the four most important people in Miami Heat history.

I can already hear the negative feedback from this selection. Riley was not a Heat player (although he was an NBA veteran, part of a historic Los Angeles Lakers team that is considered one of the greatest units of all-time) but he was, perhaps, the ultimate architect for what is considered the Miami Heat franchise.

The Heat first became an NBA team in 1988, brought to the City of Miami by an ownership group that included Billy Cunningham, Lewis Schaffel and Ted Arison, a name current Heat fans will no doubt find familiar. The earliest Miami teams struggled to find relevancy, and were historically-inept. A number of head coaches (including current Heat Assistant Coach Ron Rothstein) struggled to carve a clear identity for the expansion team. While a number of great players were part of those early teams, none really stood out in an era dominated by the center position and arguably the greatest player of all-time (Michael Jordan, whose number "23" jersey would be surprisingly retired by the Heat organization).

When Micky Arison became the Heat's majority owner in 1995, his first order of business was to bring in one of the greatest minds in basketball history, Pat Riley, as the team's President and Head Coach. Riley had been the coach of the New York Knicks at the time, a team that had struggled to get a championship while under the shadow of Jordan. Looking for a clean break, Riley resigned from the Knicks (in a somewhat heartless fashion, by fax machine) and took over the Heat. Following the model that many teams employed and that he successfully had formed in New York, Riley looked for a franchise center that could be the team's cornerstone, a force both offensively and defensively.

While there were several dominant centers in the NBA, there were none on the Heat's roster at the time. One eventually became available when a fractured, talented Charlotte Hornets team could no longer overcome clear chemistry issues. Riley packed up the Heat's best player at the time, Glen Rice, along with other role players to acquire...

Mourning had been a great collegiate player at Georgetown University, part of a dominant frontcourt called the "M & M Boys" that also featured future NBA All-Star Dikembe Mutombo. Coached by the legendary John Thompson, Mourning was a great defensive player that was intelligent, hard-working and destined for greatness. Drafted second overall in 1992, Mourning joined the Charlotte Hornets and made an immediate impact.

When he joined Riley's Heat team, "Zo" was the team's first face of the franchise. While Riley was the mastermind behind the scenes as well as on the sidelines, Mourning's determination on the court and constant commitment to defensive greatness did define - and still does - the team. His vicious dunks and patented baseline-drive-and-hook-shot stirred the crowds at the old Miami Arena and at the team's current home, the AmericanAirlines Arena. But it was his tenacious rebounding and shot-blocking - aspects that drew comparisons to Boston Celtics' legend Bill Russell - that really were the core of Mourning's on-court persona.

Limited by kidney problems that first became known in 2000 following Zo's participation in the Sydney Summer Olympics, he struggled to be the same great player in Miami for three more seasons. Eventually he joined the New Jersey Nets, fresh off back-to-back trips to the NBA Finals, looking to extend his career and make a run for a title. He never did get one in New Jersey, and was eventually traded to Toronto and was waived without every playing a single game. As a free agent, he rejoined the team with which he will be forever linked and served as an instrumental role during the 2005-2006 season. Zo would finally get his ring when the Miami Heat won the championship that year, led by a young superstar named...

What to say about Wade? For more recent fans of the team, Dwyane has been "the man" ever since he joined the team in 2003. Drafted fifth overall by Miami, Wade was part of a historically-great NBA Draft Class that featured some future teammates as well as current Knicks star Carmelo Anthony. At Marquette University, Wade had really stood out his junior year during an unexpected run to the NCAA Final Four, even notching a triple double.

Pat Riley, who by this point had (temporarily) moved away from the sidelines, drafted Wade for his athleticism. Along with recent free agent acquisition Lamar Odom and the Heat's 2002 draft pick, Caron Butler, Riley envisioned a dynamic, slashing team that could make up for the lack of a true center.

Wade did not disappoint.

Although he played some games at point guard, Dwyane eventually settled into his true shooting guard position. And along with Jordan, Lakers Kobe Bryant and Jerry West, Wade has become one of the top guards in NBA history. Able to take games over offensively and defensively, he's led the league in scoring and is the leading shot-blocker for all players 6'4"-and-under in NBA history. At first he was a very good player, feeling his way on the court as a rookie and eventually being the complimentary piece to Shaquille O'Neal, acquired by trade in 2004. But in the 2006 NBA Finals, Wade truly established himself, practically bringing the first championship parade to Biscayne Boulevard on his own.

Dwyane continued to be a dominant player on the court, battling through numerous injuries that were a result of his fearless attack on the rim. From 2007 to 2010, he single-handedly carried several Miami teams into the playoffs, although they never were considered real title contenders.

That was all destined to change in the summer of 2010. Wade's contract with Miami had expired and he was, for the first time in his career, an NBA free agent. Although he had achieved great personal success with the Heat, there were rumblings that he might consider joining the Chicago Bulls, his hometown team. He met with Bulls officials twice during that summer and the Heat faithful prepared for the possibility of losing their franchise player. However, it worked out for the best when Wade, along with fellow free agent Chris Bosh, jointly announced they would join Miami. Another player would soon announce his choice to play with the Heat, arguably one of the greatest players of all time...

Was there ever any doubt? Aside from possibly being one of the best players ever, LeBron is now the face of the Heat. It's his impact to the team - and to the league - that makes him a lock to be part of Miami's Mount Rushmore. From the moment he made "The Decision" to the time his jersey hangs from the rafters, he has once again reshaped the Heat franchise. As their leader on and off the court, LeBron defines the team and is the biggest reason for their recent and future success. Players from all over want to join what is now his team because as long as he continues to dominate the game, he is always a contender for an NBA title.

Agree or disagree? We've left off some great names on our list but we want to know who you think should be on Miami's Mount Rushmore!