Adrienne Bosh, wife of Miami HEAT's (positionless) Chris Bosh, launches her own website to give insight into how the Boshes live and inspire others to be their best.

We've come a long way, baby. It was just last year during All-Star Weekend that Chris Bosh and his wife, Adrienne, were dragged into some highly publicized personal attacks. It was one of the first moments the world saw the strength of Adrienne and Chris' character. They didn't get down into the mud pit to sling back; they flew above all the drama. Now, Adrienne Bosh has taken things a step further.

Due to overwhelming response on social media and an apparently huge fan base, Mrs Adrienne Bosh has launched AdrienneBosh.com. Why should you care? Because it's a place to see what is right with our NBA stars and their inner circle. Isn't that what we've been wanting? (In addition to another championship, of course.) Adrienne Bosh has always been generous in sharing her experiences as a (real) basketball wife on social media through her Instagram and Twitter accounts, but it has gotten to the point where her fans are saying "we want more, we want more!

In her blog intro, Adrienne explains, "after seeing the overwhelming response on my social media, and in person, I realized just how many people were interested in my journey. Women wanted to know how I handled the many challenges and changes during and after pregnancy, all while being a new mother/wife and also attempting to juggle my own social life, happiness, friendships, commitments and charity work." 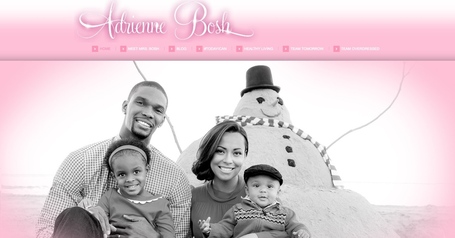 AdrienneBosh.com is a visually beautiful website with links to her own blog, healthy living including juicing and yoga and information on her "team" which includes her stylist, chef, yoga instructor, trainer and photographer. (It takes a village!) In addition, Mrs Bosh's fans have come to know her hashtags and catch phrases which include "love and light, #teamoverdressed and #todayican."

The website is a place for fans to delve into even more of that and to see more of her charity work through random acts of kindness and the Bosh's charitable foundation, Team Tomorrow Inc. Finally, if you love reality TV, don't miss "Bosh TV!" This is the place to see fantastic video clips, many from  HEAT.com and ChrisBosh.com, but what a great one-stop site to see gorgeous glimpses into their adorable family's life.

While fans may not live the same material lifestyle, true fans understand that it's not the material part that matters. At the end of her blog intro there is a reminder and part of it states:

Visit AdrienneBosh.com and see what you think. Shut down your cynical inner voice, have fun and be inspired. In a world where we focus so much on the negative, this is like a breath of fresh air.