How does Evan Turner in Indiana change Heat/Pacers inevitable series?

The Indiana Pacers traded Danny Granger to the Philadelphia 76ers, and in return they took their leading scorer Evan Turner and added them to their bench. How does Turner replacing Granger change the Heat's approach?

Share All sharing options for: How does Evan Turner in Indiana change Heat/Pacers inevitable series?

The NBA trade deadline was going by with not too much noise. Not a single big wave was being discussed outside of some small deals. The Heat made room for an open roster spot by trading away Roger Mason Jr. to the Kings. And then right as the 3 PM deadline was approaching, in his impeccable timing, Adrian Wojnarowski of Y! Sports reported that the Indiana Pacers had traded F Danny Granger to the Philadelphia 76ers. It took a few minutes for the details to come out before we learned that Evan Turner was the central piece coming back in return.

Turner was the leading scorer for the 76ers averaging 17.4 PPG. Danny Granger had been struggling to regain his form in Indiana after so many injuries, and the Pacers traded away the player who spent 8 years helping rebuild that franchise for the Ohio State alumni.

It was the biggest deal of the day, and there is a lot of talk about how this changes the Pacers. On the outside, it seems as though this was a great deal. Granger averaged a mere 8.3 PPG in Indiana, playing 22 minutes off the bench. Also, this gives the Pacers some flexibility for the impending free agency of Lance Stephenson this offseason. Turner will be a restricted free agent and also has a Qualifying Offer of over $8 million.

"We felt we needed to make this trade to strengthen the core unit and our bench...We think we got two really good players that can help." -Larry Bird

But, should the Heat be worried about what the Pacers did here? They added a more explosive scorer, defender, got younger, etc. Many of our "experts" on national television are pointing to this as the move that will put the Pacers over the Heat. Let's look at it a little closer.

Evan Turner is an upgrade defensively
Although Danny Granger was a good defender, he has lost a step. I'm sure we will miss Granger trying to fight LeBron James in a playoff series, but he isn't the same laterally as he used to be. Side note: before you think too far ahead, it's unlikely Granger gets bought out in Philadelphia as they need his salary to stay above the cap floor. Turner is a ferocious defender for his size. Against Miami, he likes to put heavy pressure on the ball when guarding LeBron or Wade. At times, it frustrates them. At other times, they just blow by him. But he is relentless, and that type of attitude will fit well in Indiana. Turner is averaging 1 SPG and 6 RPG this season.

Evan Turner is an upgrade as an additional ball handler
As I said, Granger was a superb player, but it became clear he wasn't going to be a starting caliber player coming off the bench. He just didn't have it anymore. Turner has been used to playing with the ball, whereas Granger was more of a finisher. Turner will join George Hill, Lance Stephenson, Paul George and C.J. Watson as primary handlers for the Pacers offense. He should be able to create scorers that Granger was not because of his ability to dribble and drive.

But there are some things we shouldn't overlook in this deal thinking that Turner is the ultimate game changer for the Pacers. The first is Turner's inflated numbers. He won't average those type of numbers in Indiana, nor should he be expected to. Turner averaged 35 minutes per game in Philly, whereas Granger was getting only 22 MPG. Turners 17.4 PPG were coming off of over 15 shots per game. And knowing Indy's offense, it is even more unlikely that this would be even remotely close. Turner will go from being the guy in Philly, to being a sixth man in Indiana.

Here are the things that should be kept in perspective in remembering that Turner's upgrades also come with some flaws:

Evan Turner is a downgrade as a floor spacer
One of the things that beats the Heat is effective floor spacing and three-point shooting. Miami's defense tends to leave them rotating a lot, and often it will leave a three-point shot open if the team passes correctly. Coach Vogel preaches the extra pass to his team, and with Turner now in Granger's spot, it should be viewed as a downgrade as a shooter.

Granger wasn't a terrific shooter, but he was effective. Evan Turner, this season, is a 29% three-point shooter. The truth is that Turner is a mid range shooter. He's actually pretty comparable to Dwyane Wade in the sense that defenses would rather give the three to Wade than allow him inside the arc. Take a look at Turner's shot chart this season. 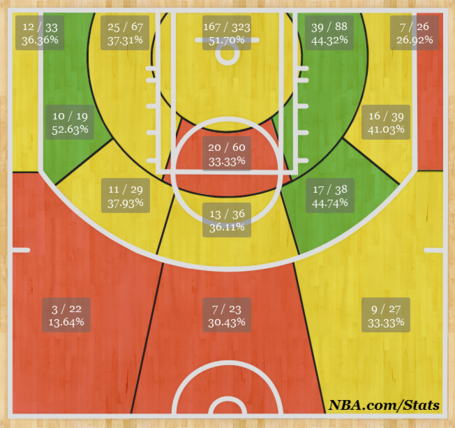 He is below average for most places outside the arc, but very good inside. This is not the way to beat Miami. It may be good for a lot of nights in the NBA, but against the Heat and they way they rotate defensively and hedge out on PNR's, Turner's strengths will not be utilized. It especially depends who is also on the floor with him. Granger was able to sit out behind the arc, and be a threat, Evan Turner, not so much. Granger was only shooting 33% from beyond the arc this season, but is a 38% career shooter from there.

Evan Turner is a downgard as a LeBron stopper
This isn't a rebuke to my first point. Although Turner is a terrific defender on the perimeter, the Pacers just lost a bigger body (Granger is 6'9 and 228 lbs.) to play LeBron James in the post. Lance and Turner will be able to sufficiently put pressure on James on the perimeter, but if James decides to go to the post, the only guy on the Pacers roster that has a chance is Paul George, and even he got beat up by James several times in the playoffs (check out Game 3). Granger wasn't going to be the perfect defender but he had the strength and upper body strength to battle James down there, and Turner does not. This may not be an every possession effect, but it certainly changes where Miami can attack the Pacers.

Conclusion:
Overall, I think it is a good trade for the Pacers. I think the uncertainty of Granger and how he would progress caused some questions. Turner is a good young player and he can give them some flexibility in the offseason. But I wouldn't over value Turner's arrival with putting the Pacers over the top. The more he plays, the less Paul George or Lance Stephenson plays, and they have been the biggest successes for the Pacers this season. Turner's impact will come in a limited role, and when it is all said and done, he probably won't be on the court when it matters most.

Feel free to discuss with us here.