LeBron James diagnosed with broken nose; status for next game is questionable

In the win over the Oklahoma City Thunder on Thursday night, LeBron James suffered a broken nose while dunking over Thunder forward Serge Ibaka, his availability in the next game against the Chicago Bull is still up in the air.

Share All sharing options for: LeBron James diagnosed with broken nose; status for next game is questionable

Well, LeBron James might be human after all. LeBron had a great night, and pretty much did whatever he wanted against the Thunder defense. Despite that, the game did not end on a happy not for James, and it had Heat fans holding their breath, as they saw LeBron on the ground, with a lot of blood on the floor.

It was confirmed today that on this play, King James suffered a broken nose:

Out of all the injuries that could have happened, this is probably the least severe, as you can still play basketball with a broken nose, not a devastating injury at all, but we wish LeBron a speedy recovery.

His status for Sunday's game against the Chicago Bulls is a game-time decision, but it appears LeBron will likely try his best to play through the injury.

Unless LeBron feels 100%, I rest him against the Bulls, give him the day off, and make sure you don't make the injury any worse. I think LeBron has done enough to deserve a day off anyways.

With the broken nose, hopefully LeBron comes out with the Bane look: 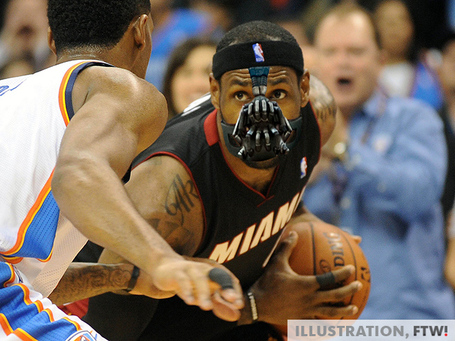