The third year point guard has made a sizable jump since he first entered the league.

Share All sharing options for: The Leap: Norris Cole

With the 28th pick in the 2011 NBA draft, the Chicago Bulls select: Norris Cole from Cleveland State University.

Chicago would then trade Cole to Minnesota, along with Malcolm Lee and cash, in exchange for Nikola Mirotic.

Minnesota proceeded to trade Cole to Miami for ... Wait for it ... Bojan Bogdanovic, a future second round pick, and cash.

Cole, a four year player at Cleveland State, was the only player during the 2010-11 college season to average 20 points, 5 rebounds and 5 assists a game. Cole is one of only two players in the last 15 years to score 40 points and grab 20 rebounds in a single game. The other guy is Blake Griffin, who seems to be a pretty decent NBA player.

Cole immediately found himself in the Heat rotation, becoming one of only two true point guards on the roster.  During the prior season, the Heat were running with a point guard trio of Carlos Arroyo, Mike Bibby and Mario Chalmers ... So yeah, you could say Cole was a welcomed addition at the time.

Still, Cole struggled out of the gate, which you might expect from a guy making the jump from the Horizon League to the NBA. During his rookie season, Cole played 19.4 minutes a game, and averaged nearly 7 points and 2 assists per game, but shot just 39% from the floor and 28% from deep. Cole fit that "pace" part of Miami's identity, but he was struggling with the "spacing" part.

Fast forward to the 2012-13 season, Cole took a step forward, but not a huge one.  He played 19.9 minutes a game, but his scoring actually dropped off from 6.8 points a night to 5.6. His shooting numbers improved to 42% overall and 36% from deep, which is a pretty sizeable jump. The decrease in scoring for Cole is probably attributed to the addition of Ray Allen to Miami's second unit, which took some of the pressure off Cole.

This season, however, Cole appears to have made what most NBA guys call "The Leap".  His shooting numbers have taken yet another sizeable leap, as has his playing time and his role on the team. Take a look at Cole's shot charts from the last two seasons: 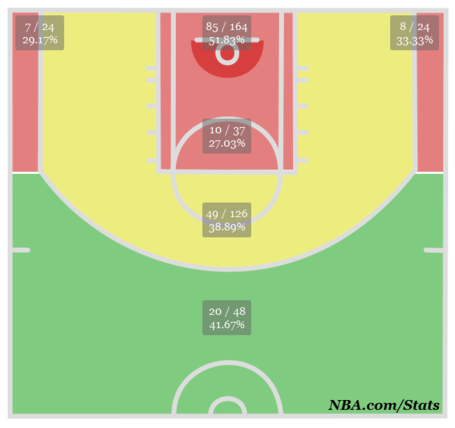 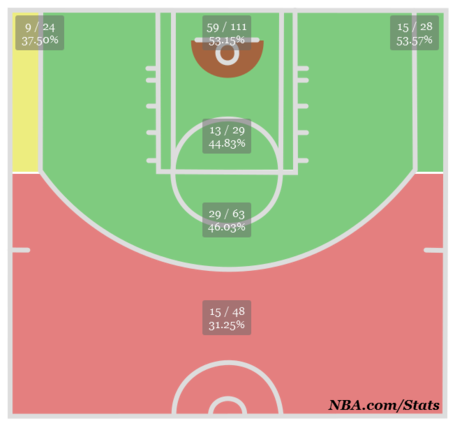 His shooting percentage overall is up to 46% for the season, and his 3 point percentage is up to 39%, good for third best on the team (he trails Beasley and Jones, who are both not currently in the regular rotation).

As his shot charts demonstrate, Cole has made a sizeable jump in two areas: In the paint but outside the restricted area, and from the midrange. That first zone is a big one for Cole. Cole's strength as a player is his speed. His speed allows him to take players off the dribble and get in to the lane, but in the past, he hasn't been able to finish in that area (27% last season), because his height has prevented him from getting the ball up and over big men down low. This year, his percentage jumped to nearly 45%, which is above the league average. Forcing big men to take an extra step out on Cole opens up backdoor cuts for Chris Andersen and Dwyane Wade, who both are among the league's elite in that area.

The midrange is the other area where Cole improved greatly.  This has helped Cole's effectiveness in the pick-and-roll game - if defenders try and go over the top, Cole has the ability to quickly turn the corner. At that point, the big man defending the P&R is faced with a decision - step out on Cole, who can now make that 17 footer, or defend the rim. In the past, it was easier to just lay off Cole and defend the rim, but now, defenses need to account for Cole stopping and shooting. The more decisions you can force a defense to make, the better.

Cole is under team control through the 2014-15 season, after which he will become a restricted free agent. Given Cole's progression and Miami's currently empty cap for the 2015-16 season, it seems likely that the Heat will match any offer for Cole, making him the team's point guard of the future.

Oh, and the hair.

THE HAIR.  BASK IN IT'S GLORY. 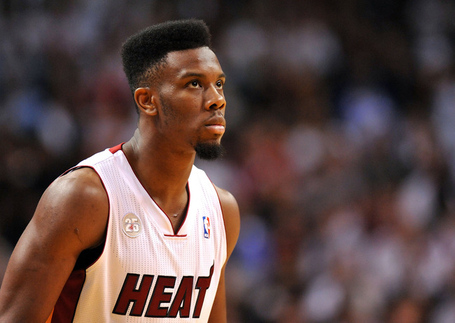