An Open Letter to Heat Fans

The Miami Heat is gearing up for the second half of the season and they need the support that only the AAA faithlessful can provide. HHH’s David Ramil writes them an open letter to ensure the boys get the homecourt advantage they deserve – from now until Ray Allen lets those motherf***ing yellow ropes back in.

Share All sharing options for: An Open Letter to Heat Fans

I know you're out there.

From Florida City to the Broward County line, Miami-Dade has millions of residents, most of which claim some level of attachment to the Miami Heat, especially around May. But that's three long months away and LeBron James, Dwyane Wade, Chris Bosh and company need your support now, perhaps more than ever.

For those of you who may not be actively following the team, Miami is a championship contender yet again. They've added some new players, said "good-bye" to others and welcomed back one former Heat player. (No, not Shaquille O'Neal. He's fat, old and retired a few years ago but I'm glad to see you remembered those glory days from six years ago.)

The second half of the season is upon us and the Heat is making their annual playoff push. You see, they've played a lot of game since the "Big 3" got together in 2010 and, even, for superstar athletes that have a bevy of doctors, trainers, chefs, and groupies massage therapists to ensure they're healthy and prepared, playing that much can be tiring. Sometimes they've got to conserve energy and then turn it up a notch, and your boys happen to have notches several higher than any other team in the league (hence, the last two championships).

They could go deep in the playoffs again this year, giving some of you several opportunities to wear all white without having to learn the basics of Santería.

The point is they're very, very good, and you haven't been there to see them. But it's long-past time you did.

I know this doesn't apply to everyone, most of all those people in the upper levels that genuinely appreciate the team. They're willing to brave the traffic, cost of parking and inefficient transit system just to see the Heat play but for those of you in the lower bowl...what's your excuse?

You've been busy, you say? Absolutely, I get that. But you got these tickets - paid quite handsomely for them, to be honest - and you don't even use them? Makes no sense. Give them away. To the security guard in your Downtown Brickell condo. To the lady that does your mani-pedi. To the delivery guy from Joe's Stone Crab. Anybody. Just make sure they get used by someone.

Maybe, you might rationalize, the level of competition isn't always that great. That's true. There are teams that aren't expected to be competitive this season but, for some reason, they seem to play the Heat extremely well. It could be because Miami are the NBA champions and this will be their only opportunity to prove they're still good enough to compete against the elite teams in the league, but, whatever.

That excuse seems justifiable (even if it is lazy) until you look at a recent nationally-televised game against the San Antonio Spurs. You remember them, right? From last year's Finals? Yeah, they were pretty good. Almost beat us, too. They're a pretty good team, as you might recall, so you'd definitely want to head out early and catch them play right? 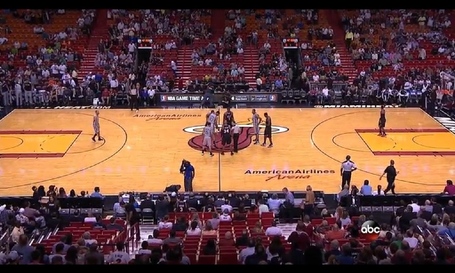 Huh. Maybe not? Well, it was a Sunday afternoon game, so I imagine, your late night binges at various corporate events or galas kept you out until way past 9 P.M.

Well, what about a weekday game, at a reasonable evening hour? How about an extremely sexy matchup against another Finals opponent, the Oklahoma City Thunder? Yeah, those guys. They're still good, too. And, no, they haven't gone back to Seattle. Yet. But they've got this really good player, a guy who's been scoring over 30 points per game and he might just be better (at least this season) than LeBron James so, you'll definitely want to see this game! I mean, the whole country has been looking forward to this one! You'll be there, right? 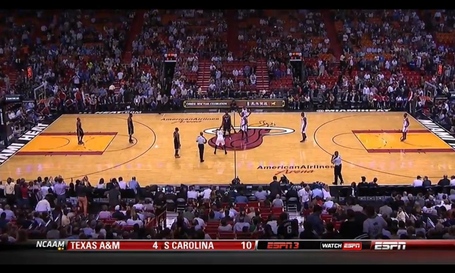 Oh. I guess not. That's too bad. They could've used your support that night. So, maybe it's a Western Conference-thing, right? You've got some kind of bias because you'll see one of these teams in the Finals so, no worries until then? But you remember the Indiana Pacers. Scowling all the time, almost beat us last year, too? Yeah, that's a game you'll be there early for! 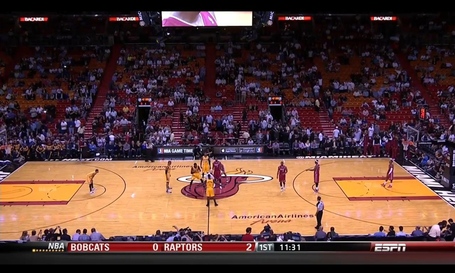 Damn. Now, I have no idea what kind of regular season game you'll show up for! Oh, wait, what's that? It's not important? No, I guess it might seem that way being you're not the ones on the floor, playing the actual games. But did you know that, across the league, teams shoot better at home? It's true! Now, that could be familiarity with the court, lighting, etc. But there's no way of proving exactly what the advantage is. And there's certainly an advantage, even for a team like Miami, which shoots better than everyone else.

Through 47 games this year so far, Miami has played 25 at home (that's 22 away games for you folks that don't do stats very well). In those 25 games, they are shooting nearly 53%, tops in the league. In those other 22 games?

That 4% may not seem like much but it represents the largest drop of any of the top teams in the league. And in close games, decided by five points or less, that 4% can make the difference between this...

So, just do the guys a solid and show up to the games, for crying out loud. Miami fans are so damned lucky to be able to see basketball greatness at least 41 times a year. There are cities (oh, maybe Seattle?) that would love the opportunity to see LeBron and Dwyane connect for an alley-oop pass on any given night. Don't believe me? Just watch the next six games. These are away games as part of a 17-day long road trip where Miami will face some of the best teams in the league including the Los Angeles Clippers, Phoenix Suns and Oklahoma City. Watch how those stadiums are packed before the opening tip. This is what you should be aiming for, people! You've got 17 days to get ready! Make it happen.

(As a side-note to Heat owner Micky Arison...how about instituting a rule where seats in the lower bowl can remain empty for just the first quarter and then open them up to the slobs in the nosebleed section? Let them rub elbows with some of the folks who can't bother looking up from their iPhones to know the difference been a screen and a back-door cut. It's not enough to just be there, y'know. You should show a little excitement and enjoy the show.)

Don't let me down, Heat Nation. I know you can do it. You can be as passionate, loyal and intense as any fanbase in the U.S. Just don't be vulgar...

...and do yourself a favor. Stick around for the whole game, huh?