A local Miami company has Miami Heat players decked out in Heatles gear and fans amped up for the team's upcoming playoff run.

Share All sharing options for: LYFE Brand has The Heatles and their fans decked out for the upcoming playoffs

By now you've probably seen their clever Miami Heat-themed designs peppered around the AmericanAirlines Arena, on Instagram, through various media outlets and even on Miami Heat players themselves, but who are the guys behind LYFE Brand, the clothing line that's caught the attention of Heat fans and its players? 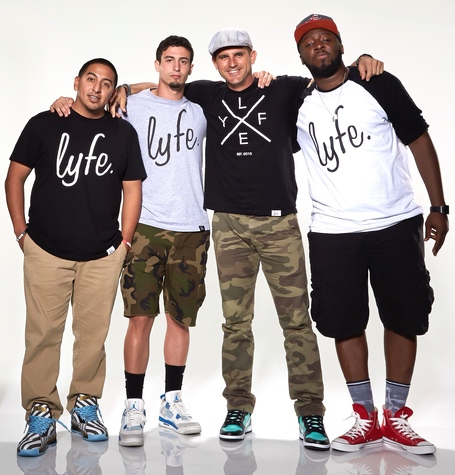 A homegrown company founded by four partners, Michael Guerrero, Bob Metelus, and Alexander and Dax Tamargo, the company has gained a lot of attention recently since Dwyane Wade was spotted wearing "Note To Self" bands on his wrists during a nationally televised game on ESPN and their "Heatles" t-shirt was sported by Wade and teammates LeBron James and Udonis Haslem at Shane Battier's Battioke charity event in January.

I had the opportunity to catch up with one of the company's founders to learn more about the brand, its mission and their reaction to having Heat players themselves sport their line.

Where did the idea to create LYFE Brand come from?
We wanted to create a quality-clothing brand that promoted positivity. If you take a look at all of our designs, everything has a positive message.

How did the Heat-themed designs find their way into your lineup?
Well, being from Miami we're all fans of the team and the following that we have is made up mostly of Heat fans so it seemed natural to come up with a few designs and give the people what they want.

We're not a Heat brand; we're simply a clothing brand that produces a mix of lifestyle and sport-themed apparel.

How were you able to get the attention of the Heat players and get them to sport your designs?
Well first let me start off by saying that we are privileged to have such a great group of guys willing to rep our brand. In regards to getting the players' attention, one of the founders of the company has a close relationship with Dwyane Wade.

In this business, relationships are invaluable and we are appreciative of that connection. The idea was that if we could come up with some cool and creative "lyfestyle" designs that people would like... getting the attention of the HEAT players and them liking it and wearing it, is a bonus.

We recently saw some bands that were produced by your company being worn by Dwayne Wade during a nationally televised game on ESPN that said "Note To Self," explain the meaning behind that?
We wanted to do something that he could wear to use as motivation. It's a long season and a little motivation can go a long way.

Kevin Durant's comments about Wade in the offseason and Wade's subsequent reaction on social media sparked the idea but it's really more than that, we wanted to use it as a motivational tool for all of our followers and really start a movement that promotes positivity and belief in oneself.

So we brought the idea to See Ya PR, a Miami-based creative agency that works with the Heat and collaborated with them to make these pieces come to life. 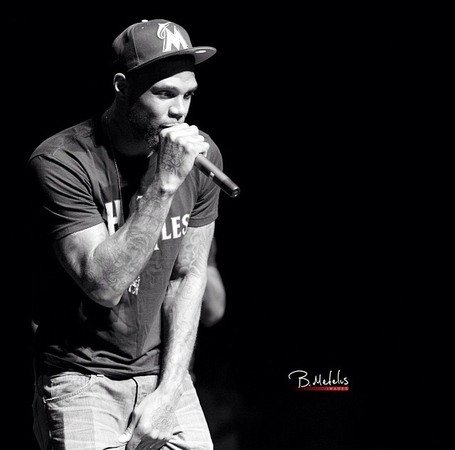 Wade, James, and Haslem were sporting your Heatles tees during Shane Battier's Battioke event in January, what was your reaction to seeing them wear your stuff? Were you expecting it at all?
Well it's who they are. They use #Heatles when they post anything team related on any of their social networks and they compare themselves to the Beatles when they're on the road. We saw that as an opportunity to promote the Heatles movement beyond social media. So, we approached Wade with the idea, he thought it was a good one so we printed up the shirts.

As far as Battioke, they had the shirts prior to the event, but it was definitely a welcome surprise when we saw the guys come out on stage wearing them. What a fitting time to debut them too.

You guys have definitely have fans excited about The Heatles with your t-shirts and now there's a new rap song called My Heatles, can you explain that?

Well it was inspired by Dwyane Wade who took to Instagram one day replacing the lyrics in a rap song and a local music artist made a little remix to add to it. We're happy that we've got Heat players and fans inspired to show their support for the team in different ways.

Do you guys have anything in the works for the upcoming playoffs?
We do.

Any hints as to what we may expect with the playoff designs?
Let's just say, there will probably be a lot of white.

For more information, be sure to check them out on Instagram @lyfebrand, Twitter @LYFEBrand_ and on the web at www.LYFEbrand.com.

The kind folks at LYFE Brand are in a generous mood and are giving away a FREE Heatles t-shirt along with a Note to Self band to one lucky winner. All you have to do is follow the instructions below!