Today we will look at the all time 3 point leader and NBA Finals hero Ray Allen.

With Ray Allen being primarily a jump shooter (82% of his shot attempts are jumpers per Basketball-Reference), I wanted to use the more detailed shot chart provided by NBA.com to compare some of his zones.

At first glance the most concerning thing is the precipitous drop Ray has experience from the left corner. The RALC3 (Ray Allen Left Corner 3) has been, by far, the bread and butter of Ray's overall 3 point efficiency. The NBA.com Stats page goes back to 2007-2008 and every season up until this one, Ray's left corner was in the green (for above league average) and this year it has plummeted to red (below league average).

Prior to this season, Ray has shot a scintillating 46.2% on average from the left corner (dating back to the 07-08 season). His wing efficiency has also dipped, but only slightly. The only spot where Ray Allen has been reliable from downtown is the right corner, hitting a scorching 50%. Ray has been adequate from this spot, but it's never quite been his go-to shooting zone 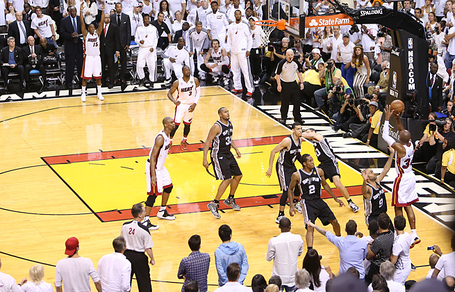 Ray has compensated somewhat by being 6 percentage points better at the rim. For a 38 year old, hitting 60% at the rim is nothing to scoff at, but I think most would agree that Ray Allen having to dribble too much often leads to more bad than good. Ideally, Miami would prefer their penetrators (LeBron, Wade, Chalmers & Cole) to suck in the defense and find Ray open from the perimeter.

While we could dig deeper into the advanced stats, simply examining Ray's splits can paint a more interesting picture.

Through October & November, Ray hit a solid 39% of his 3s. December a mildly worse 37%, but by January Ray utterly fell apart, hitting a ghastly 25% of his overall 3 point attempts. His net rating was a colossal -20 and the oddest thing was his minutes per game was highest in January, in part due to Dwyane Wade's maintenance program. There is reason for optimism, however as Ray has been above 40% in both February and March (even including yesterday's 0-3 stinker) and his minutes are slightly down.

WIth Father Time creeping up on Ray Allen, it's rather imperative that his shooting continues to tick upwards back to his career norms because at this stage of his career, Ray is a sieve on defense and when the perimeter shot isn't falling, he can be a detriment to the team. If he can simply regain the stroke from the RALC3 in time for the NBA Playoffs, Ray Allen will continue to be an effective bench weapon for your back-to-back NBA Champions.

Next time, we'll look at Shane Battier, who's hot and cold marksmanship has perplexed quite a few fans.

Make sure to read the first chapter on LeBron James and his long range shooting this season..